National Registration of Citizens – A legacy of The Assam Movement

Formulation of the draft of National Registration of Citizens(NRC) by the BJP government made headlines. So before asking what is NRC, let us first try to explore the context and the nature of events that shaped NRC. The 1980s is seen by many as a period of rising regional aspirations. These movements frequently involve armed assertions by the people, their repression by the government and a collapse of the political and electoral processes. The accords were reached eventually, after a long drawn process of dialogues between different parties that aimed to settle contentious issues within the constitutional framework. However, the journey to the accord and beyond is often a tumultuous one. Here is all you need to know about Assam movement and how National registration of citizens have shaped.

The Background of The Assam Movement

The partition reduced the northeast to a landlocked region connected to the mainland through a “chicken’s neck”. Since independence, the region has undergone plenty of changes. The integration of princely states in the late 40s and their reorganisation was a slow and gradual process lasting up to 1987 gave north east a complex social character. The cut-off from the rest of the country took a toll on the region’s development. It became economically backward and it’s politics too remained insulated. Besides, the region has a huge international border and weak communication between the northeast and the mainland. At the same time, the huge influx of illegal migrants has come to cause a lot of demographic changes. All this has further added to the delicate nature of the region’s politics. Thus the stage was set for some dramatic developments in the 1980s.

The Movement Against Outsiders –

The large-scale migration, especially in the state of Assam, created a multidimensional problem that had pitted the “local” against the so-called outsiders. The “latecomers” from both India and abroad were seen as aliens in the region and encroachers on their already scarce resources and opportunities. The state of Assam thus witnessed the most iconic movement, aimed at compelling the Indian government to identify and expel illegal, (mostly Bangladeshi), immigrants and provide constitutional, legislative and administrative safeguards to the indigenous Assamese people – The Assam Movement. The protests more than often turned violent. Slowly, the issue came to be perceived along not just political but also cultural, economic and religious lines by different groups.

Read more – What Will Be The Effect Of NRC On 2019 Elections?

How did the Assam movement start? –

The movement was led by All Assam Students Union (AASU), a students group and was not affiliated with any political party. The All Assam Gana Sangram Parishad’ (AAGSP), was a political party in Assam, founded by the Asom Jatiyatabadi Yuva Chatra Parishad (AJYCP) in 1999. The cause of agitation among people was purely political initially. In 1978, re-election for the Mangaldoi Lok Sabha Constituency, after Hiralal Patwari’s death, election officials observed an abrupt and dramatic increase in the number of registered voters. These were allegedly the illegal migrants whose names were unlawfully added to the electoral rolls. The matter was immediately taken up by AASU, who started to mobilise people on a large scale. 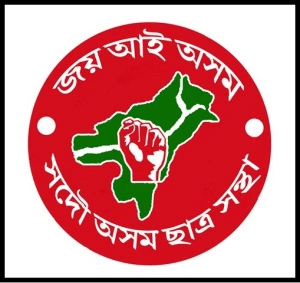 Acts of violence took place from both sides. Khargeswar Talukdar, the 22-year-old general secretary of Barpeta AASU Unit, was beaten to death and thrown into a ditch next to the highway at Bhabanipur. Khargeswar later famously came to be known as the Movement’s first Martyr. In the meanwhile, violence against the latecomers had spread all over the Brahmaputra valley. In a stunning incident on 18 February 1983, a mob of indigenous Assamese people killed 2191 suspected immigrants, mostly children and women, brutally with weapons like knives, daggers or simply bamboo sticks in 14 villages in Nagaon district. This is one of the most barbaric massacres of modern India known as the Nellie massacre. Since elections were met with protests and boycott, President’s rule was to establish in the state of Assam. After successive tumultuous years (1979–1982), the Indira Gandhi government decided to hold elections in January 1983 which was met with violent protests throughout the state. 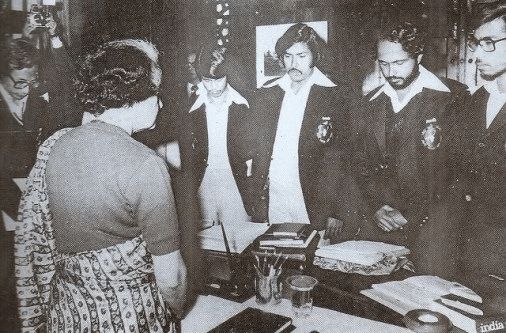 The All Assam Minorities Students Union and AASU were invited for talks by the Centre for ending the gruelling impasse. But this did not reap any favourable outcome. In fact, the Central Government resorted to measures such as arresting state government employees who boycotted the elections and censor of press and detention of journalists. Peace only came after the efforts undertaken by the Rajiv Gandhi government.

Damage to the Economy –

There were other economic issues too. Assam was in the grips of widespread poverty and unemployment in Assam despite the availability of revenue earning natural resources like oil, te, and coal. The argument put forward by protesting groups was that these resources were being “drained” out of their state without any commensurate benefit to the indigenous people. Crude oil from the oil fields of upper Assam was refused to the refineries in Bihar and Jharkhand through the formation of the human chain. The rigid attitude of the agitators resulted in the complete breakdown of administrative machinery. Economic blockades and Law and Order crisis was the order of the day.

Also Read -   Why State Election results 2018 are not Congress’ win but BJP’s loss?

A Matter Of Cultural and Religious Pride –

The movement was also a matter of preserving the cultural pride of the local Assamese. They feared that the outsiders in their state weren’t identified and deported, they will be reduced to a minority, as the case was in Tripura. The protester felt that the influx indeed threatened their native language and culture. However, even at this point, the question still was of locals versus outsiders, irrespective of their country or religion. RSS was the first to transform the agitation from being anti-bahirgat to being an anti-videshi movement. In the gradual course of time, the sentiments were further directed against the immigrant Bangladeshis and later against the Bangladeshi Muslims.  the RSS stated its opinion that Hindus were sharanarthis (asylum seekers) and Muslims were anupraveshkaaris (infiltrators) i.e. the Hindus had fled Bangladesh to escape religious persecution while the Muslims had slipped into Assam in search of better economic opportunities. In this way, a distinction was made between the immigrants on the basis of religion. In some way, it also shifted the focus away from religion-neutral and development-oriented concerns like competition for jobs and access to resources.

Read more – Can National Register Of Citizens Solve The Problem Of Illegal Immigrants?

The inclusion of such a large number of outsiders in the voting lists meant that the power to elect a government of their choice in their state had suddenly shifted out of their hands. This sense of loss of power was aggravated by the apprehension of locals that the centre was siding with the outsiders for ensuring electoral success. Therefore, as many as 18 lakh people took an oath to carry out the struggle until the foreigners are ousted. People of Assam refused to take part in General Elections (1979). “No deletion, no election” was the demand. Assam became the first state in Independent India to not have taken part in the parliamentary elections. The movement under AASU and AASGP witnessed humongous support from people across the state, the north-east region and across the country, except the ruling party which would have benefitted from the unlawful inclusions in the voting rolls. When the Congress saw Assam slipping off its hands, it passed the Illegal Migrants ( Determination by Tribunals ) Act in 1983. However, it provided special protections against undue harassment to the “minorities”(or outsiders) that were affected by the Assam Agitation and was only applied in the state of Assam. Thus, the Supreme Court of India struck down the law in 2005.

The road to Peace and Negotiations –

Eventually, after six years of turmoil, the new government under Rajiv Gandhi opened up negotiations with the leaders of AASU and AASGP. This time the negotiations ended up with the signing of the Assam Accord on 15th August 1985. 1 January 1966 became the base year for detecting foreigners and 24th March 1971 was decided as the cut-off date for detecting illegal foreigners and removing them from the electoral rolls and deporting them back to where they were from. 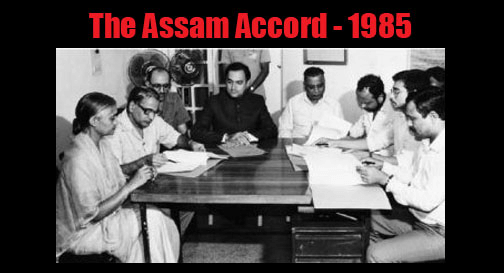 Politics after the Promise –

After the successful completion of the movement, the AASU and AAGSP organised themselves into a regional political party called Asom Gana Parishad. Prafulla Kumar Mahanta became the Chief Minister of Assam after the elections of 1985 with a promise of resolving the foreign influx issue and building a “Golden Assam”.

The reality is that the accord indeed brought peace and stability to the state, however, at most levels, it failed to address the “main” issue.

It is a well-known fact that the issue of “foreigners” is still a live issue in the politics of North-East in general and Assam in particular. Many provisions promulgated by the Assam accord like the National Registration of Citizens came to effect after more than three decades of the signing of the accord.  On 30 July 2018, when the final draft of the National Register of Citizens was released, close to 40 lakh residents of Assam were disappointed to find their names missing from the list. With the Opposition, especially West Bengal Chief Minister Mamata Banerjee slamming the move, BJP president Amit Shah reminded everyone that the accord was signed in 1985 under the Rajiv Gandhi-led Congress government.

“Rajiv Gandhi signed the Assam Accord in 1985, which was similar to NRC. They did not have the courage to implement it, we did,” he said in the Rajya Sabha on Tuesday.

The BJP government as people say kept its motto of “intention” and “courage” by implementing this controversial provision. Even though the provision is part of a pact formulated by the Congress back in the 80s, BJP’s act has still been able to invite passive if not active criticism from all sides.

What do you think about the Assam movement? Let us know in the comment section.