How is India Changing under Modi Government ? 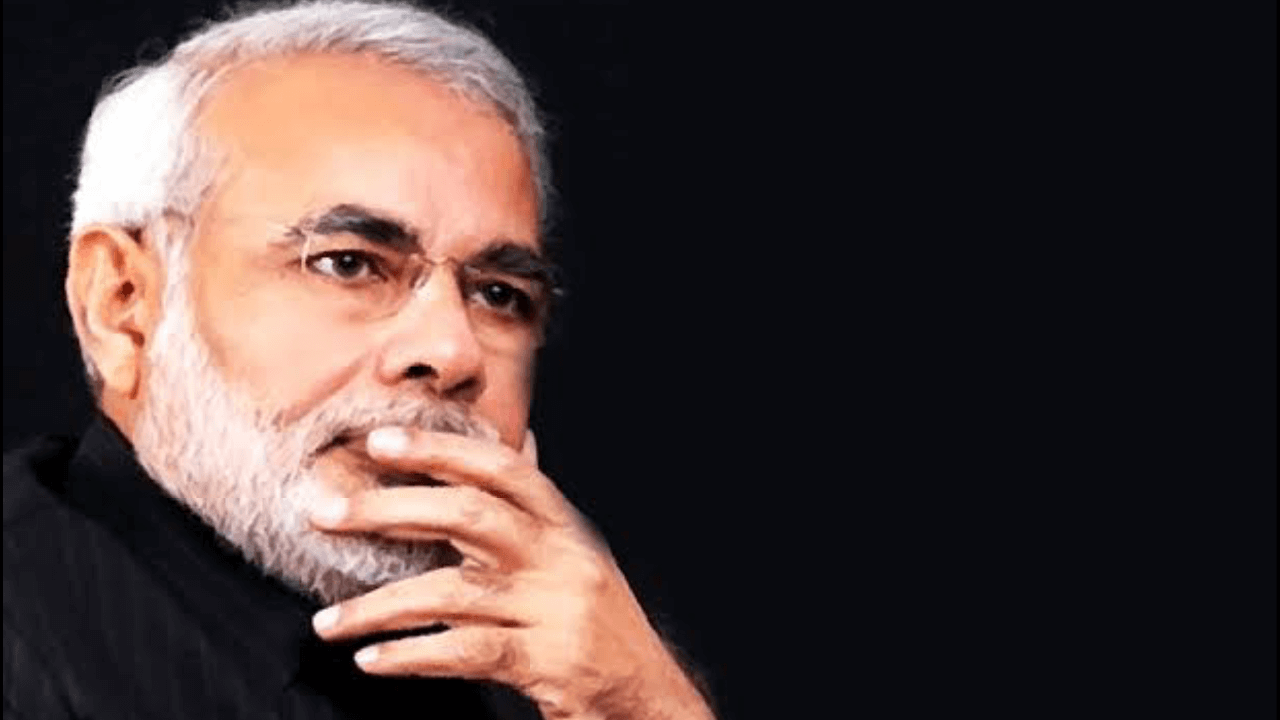 As we celebrate our 72nd year of republic, we witness one of the most daring efforts of diplomacy on part of the government. This Republic Day we witnessed ten leaders from ASEAN countries attending the ceremony. A show of power and leadership of PM Modi. This showing of power is on the backdrop of how India’s image has changed in last few years. We have seen India’s image changing in both World and domestic front. So let’s have a look at how the 3years of Modiji’s government has changed India as we know it-

Has the Modi Government successful in appealing Global focus?

The flag hoisting and parade ceremony on Republic day have always been seen as a show of power. The tradition of inviting chief guests is also a part of that process. As we celebrate our 69th republic, we should also contemplate the significance of the attendance of ten Association of South East Asian Nations (ASEAN) leaders in the VIP gallery on Rajpath. The attendance signifies the importance of India in ASEAN countries and the growing power in international circles.

India has entered three groups of arms dealing in as many years. It is closing on a membership in Nuclear Suppliers Group(NSG). The obstacle being China, who refused the entry, as India is a not a signatory of Non-Proliferation Treaty (NPT). This intervention is also a sign of China being varied of growing power of India. They have also seen the passive aggression of India on Dokhlam issue.

Read more: Modi Government: Here Is How It Has Performed Till Now!

Another example of this aggression is the evacuation of Indian citizens stranded in Yemen. The operation Raahat was done in absolute secrecy and is said to be done under the supervision of Minister of State of Foreign Affairs Retd. Gen. VK Singh. The aggression is also sometimes directed towards terrorist. Two surgical strikes in Pakistan occupied Kashmir and Myanmar are the proof of it.

Has the Modi government fared well in curbing corrupt NGOs?

Although we have seen India’s stature rising on the international stage, we have seen equal criticism too. Since 2014, almost 33,000 NGO’s have lost their Foreign Contributions Registrations Act (FCRA) licenses. Many of them lost it because Home Ministry alleged that they were flouting norms, thus their licenses are revoked.

The process of cancellation of FCRA licenses was part of a review done by Home Ministry on workings of NGO. The review was started by Ministry in 2015 and was focused on the funding of NGO’s and their financial records. The continuing process also saw many cancellations of licenses when NGO’s were not able to produce their financial statements. The review and cramp down attracted criticism by NGO’s as well as from the International community. NGO’s play an important role in society by providing social services and crank down like this discourage them.

The argument by the government is that NGO’s were flouting norms by using the money received inappropriately. They supported this by citing examples non-compliances of several of NGO’s on the rules of submission of financial reports. The new rules stated that NGO’s had to submit annual reports under as many as five categories depending upon their work. The non-compliance resulted in the cancellation of licenses. Though the initiative of the government is to eliminate the corruption in NGO’s they are also hampering a system which provides valuable services to the underprivileged section of society.

Is Modi Government successful in fighting age-old patriarchy prevalent in our society?

One of the major changes in society has been the talk about the rights of women taking a center stage and recognition. The recent movement around this started with agitations by women regarding entry into inner sanctums of several religious places. The victory followed their movement. The Supreme Court taking reorganization of this inequality faced by women and has ordered clearly that women should be allowed to enter inner sanctums and even premises in some cases and no discrimination is to be tolerated in this regard.

The movement then soon shifted to the issue of triple talaq. The rights of Muslim women being violated by the triple talaq system had come into light before as well but had been always subsided by politics or societal pressure. This time though we witnessed a strong political sympathy towards Muslim women and their rights from almost all the parties. The society as a large also supported their cause.The verdict of Supreme to abolish it was welcomed and the Modi government acted quite swiftly on it.

Read more: How Has Modi’s ‘Make In India’ Campaign Performed By Now?

The Triple Talaq bill was passed by Lok Sabha in winter session but is pending in Rajya Sabha as Congress raised a few doubt about it. The swiftness though of government was quite noticeable. Modi government has always said that they are here for good governance and in this particular matter they did fulfill their promise.

Another shining point in the Modi government is the appointment of Nirmala Sitharaman as defense minister. The appointment is a progressive step as she earned her post and deservedly got it. Her performance as a Minister of MSME was great. The departure of Manoher Parriker left a position for grabs and it did go to the deserving candidate. She is only the second and in some sense first Women Defence Minister as Indira Gandhi held the position as an additional charge.  This also marks the first time when the top four posts in the government are shared by both genders equally. The top four posts consist of the Prime Minister, Finance Minister, Foreign Minister and Defence Minister, out of which Defence Ministry is with Nirmala Sitharman and Sushma Swaraj is handling Foreign Ministry. 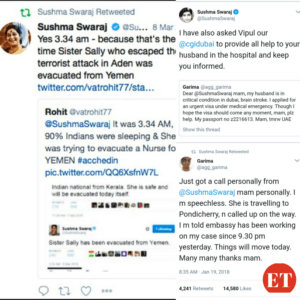 Sushma Swaraj as a foreign minister has to be also credited for bringing governance and grievance solving to a social media platform. She is one of the first ministers alongside former Railways Minister Suresh Prabhu who used twitter very efficiently. Her twitter handle @SushmaSwaraj is quite buzzed with tweets from people looking for solutions to their problems. She has now become famous for taking recognizance of serious petitions on Twitter and even acting on them. She famously landed a helping hand towards a cancer-battling child from Pakistan and even made a policy of same.

For her new kind of diplomacy, she even got featured in Foreign Policy magazines top global thinkers list, but as we have seen that using social media also comes with its bane. Sushmaji is also criticized for blocking her critics on Twitter. The famous example being the Congress MP Pratap Singh Bajwa, who was repeatedly questioning her on whereabouts of 39 missing Indian nationals in Yemen.

Is it true that Railways experienced great success under Modi Government?

Another person who utilized the social media for governance was Suresh Prabhu. The former Railway minister made Twitter a tool for more open governance. His famous commitment to resolving every problem posted on railways handle stood true on many occasion and garnered his praises. His pro-activeness towards cleanliness in coaches was also noted worthy. In his tenure, he even started a service regarding the same. Clean my coach app and the site was launched by him for reporting dirty coaches in trains and promised to clean them during the journey as well.

He is also credited with bringing the railways budget in the foray of the financial budget but his tenure was plagued with rail accidents. His successor Piyush Goyal too has picked up his habit and is resolving complaints posted on Twitter. He even managed to start a special refrigerated goods train for AMUL in less than two months. In September of 2017, Amul had proposed on twitter a business proposition. They proposed transporting their product through a refrigerated train to Delhi. Piyush Goyal saw the suggestion on Twitter and acted on it. The result, a train leaving Palanpur station on November 11 with Amul products on it for Delhi. 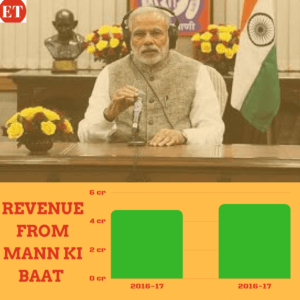 PM Modi is also not far behind in using internet for governance. He is actually ahead of his cabinet colleagues. PM Modi’s application Narendra Modi has been downloaded over 50, 00,000 times. Not to mention he is also the most followed politician of India on twitter. But more than on Twitter and on his app, he uses the age Radio for communication.

We get to listen to him every month on All India Radio and it has become quite famous also.  BJP used this even in their election rallies. The programme though is not that political in itself. Mann ki Baat is actually a reminder of changes and bright spots in our country that Prime minister shares with us. Though we would like to listen more of PM Modi in interviews and answering some questions from journalists, we can get by this venture his also.

Interestingly the show is also a profitable venture for All India Radio (AIR). In the year’s 2015-17 they earned over 10 crores from the show, as advertisers wanted the spot around the show’s timing to reach a mass audience, who tunes to Radio to listen to PM.

Digitalisation of the economy – Has Modi Government achieved its dream of a cashless society?

Another pet project of PM is the goal of cashless society. While announcing demonetization, he did not mention this goal of his but soon enough he got around it. For the past year or so, the government has been pushing for this goal. Demonetisation played a big role in pushing people in direction of digital payment and the subsequent society has accepted it as well.

When we go out today for shopping and even to our local Kirana store we see Paytm or card accepted signs. This change is to be credited to PM Modi and his efforts. Though we are still a heavily depended society on the cash-based transactions, the move to the cashless transaction is there to be seen.

The change is about turning back to radio for broadcast or a trend of Twitter and cashless transaction, the last three years have been full of these changes. We have just celebrated our 69th Republic Day and are looking towards completion of tenure of PM Modi. Though we are still a year away from 2019 elections, the changes in society have to be reviewed now. For, as we come closer to elections we would see more of show-offs and counter shows than actual changes.

Read more – Does India Need A Presidential Form Of Government?

In the last three years, we have had GST and demonetization along with Triple Talaq and twitter governance. We have also listened to Mann ki Baat on multiple occasions along with shouts of Karni Sena. The changes in society under PM Modi have been a mixed result. The jury is still out on it and the judgment will only be known in 2019.