Caste based Reservations: Discrimination behind the drape of equality.

In India, based on caste, religion, and gender, a percentage of seats are reserved for religious minorities, Scheduled Castes (SC) and Scheduled Tribes (ST) in educational institutions, government jobs, and the legislature. The reservation system was introduced when India got independence from Britain. Even before the Independence, numerous attempts were made by the British government as well as the Princely States, rulers, to give more opportunities to the suppressed communities. Has the reservation helped in the upliftment of the suppressed classes? Why was it introduced? Do we still need this system of Caste based reservations in India? Let’s look at the background.

Caste based reservations: Its genesis and background in India.

According to the Dharma Shastras in Hinduism, the society can be divided into four categories based on the birth and occupation of the family, a person is born into.

There were other backward classes, that do not fall in any of the above-mentioned categories. They are the Dalits and other Scheduled Tribes of today. The population was divided on the basis of their occupation and a child born into a family was only allowed to follow the same occupation of their parents. This made the Upper Castes act superior to the backward or vulnerable section of the society. They further devised rules to be followed. This existed before the establishment of British Raj in India. The British Government attempted to change this system.

In 16 August 1932, the British government under the Prime Ministership of Ramsay Macdonald introduced Communal Award, which granted separate electorates to Forward Caste, Scheduled Caste, Scheduled Tribe, Muslims, Buddhists, Indian Christians, Sikhs, Anglo-Indians, Europeans and the Depressed Classes. Separate Electorate offers a separate seat in the legislative assembly, in which only the members of a particular community could elect their representative, who is also a member of their community. Many leaders including Mahatma Gandhi opposed this, fearing that this would further divide the society on the basis of caste and religion. He also feared whether this would make the untouchables, always untouchables and can never come out of that title. However, B.R. Ambedkar was one among many who supported separate electorates. He opined that it would give more opportunities for the untouchables and other backward classes.

To not implement this, Gandhiji went to the extent of fasting until death. Finally, after much debates and discussions, the Poona Pact was signed in 1932. It allowed each community to have a representative, elected by the general voters, not only by the members of that particular community. This offered 15% and 7.5% (total of 22.5%) of reserved seats for SC and ST students, respectively. It was later raised to 49.5% by including an additional 27% for OBCs. It is the same for government jobs.

Why were the caste based reservations introduced in India?

It has been 70 years since India got Independence from the British government. The situations and circumstances that prevailed during the drafting of the constitution were entirely different from now. Until then, the lower castes and other backward communities were suppressed by the higher castes. They weren’t allowed to enter temples or pursue education. There have been cases where women of a particular community weren’t allowed to wear clothes to cover the upper part of their body. One such example is Temple Entry Proclamation of 1936 in Travancore Province. People belonging to the lower castes weren’t allowed to enter temples or even walk in its neighbourhood. This Proclamation gained them the right to enter temples.

By giving reservations, the members of the Constituent Assembly wanted to bring changes in the way they were treated in the society so that they can avail equal opportunities like the upper castes. It was introduced as a process to bring equality gradually. From that, till now, most of the scenarios have changed. We see many young citizens excelling in various fields, who belong to Dalit and other backward classes (like Kalpana Saroj, Ilaiyaraja, and so on..).

Also Read -   How is India Changing under Modi Government ?

How far are caste based reservations viable in the current scenario?

Is it fair to enroll a student based on his/her caste? If caste decides the future of a student, why do we ask every student to dream equally? The constitution talks about giving equal opportunities. But is this happening?

Caste based reservations: How better could we amend it?

The current reservation system can be given few amendments according to the current scenario.

However, the reservation must not be for the seats. It can be given the in the education fees, a concession for students who can’t afford.

Documents to support their answers should also be attached. (Educational Qualifications of their parents. A copy of their certificates).

A board should be formed for this. They should cross-check the details provided by the applicant. If we check the income and the occupation of their parent, it can give few answers. Also, the board should have access to a database that contains all the details about every single citizen of India. For which, a proper survey solely for this has to be taken.

Why the ‘second’ criteria? What difference can the generation make?

Let’s take any one general category student and try to find his family history. You will find at least one of his family members, be it his/her parents, uncles, grandparents or all of them to be educated, at least with a school graduation or degree.

Let’s take anyone SC/ST student and try to find the history of his family. In more than few cases, particularly in rural areas, he will be the first school completor or first-degree holder.

A parent of a general category student can possibly help him, guide him for his higher education. Atleast with the help of the Internet. Whereas, an SC/ST category student will not have his parent to guide him, especially if he is from a rural background.Not all SC/ST families are uneducated or poor. Similarly, not all general category families are educated or rich. Let us have a fair scale that divides our population for reservations.

In the statistical chart given below, the general category has a higher percentage of educated people at primary levels, secondary levels and graduate levels of education. The percentage of graduates in SC/ST category are extremely low. 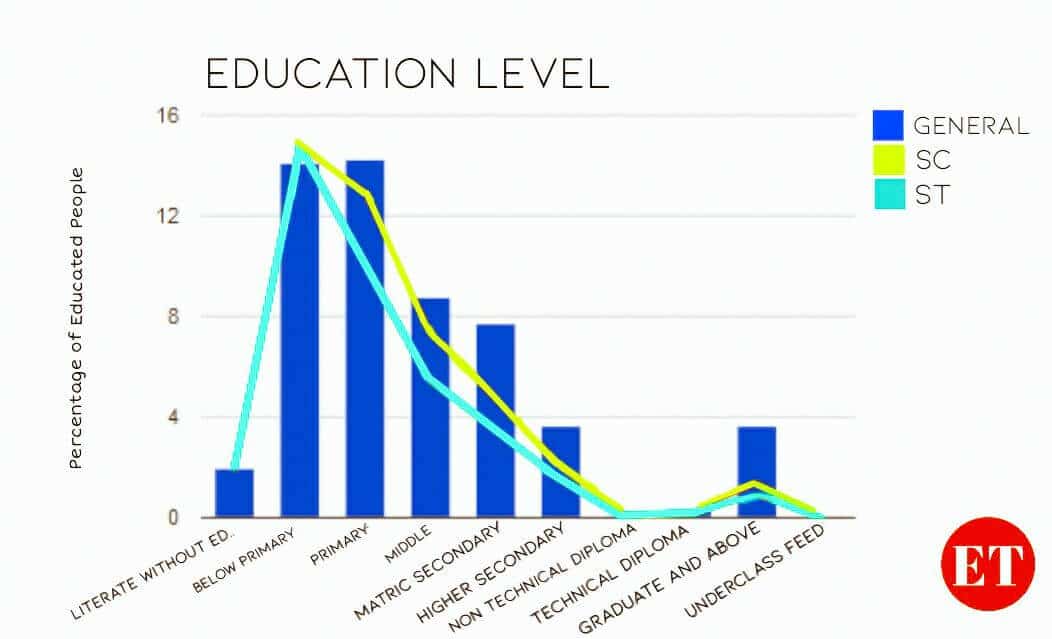 Similarly, in this graph, the percentage of poor SC/ST is higher than poor upper castes in both rural and urban areas. 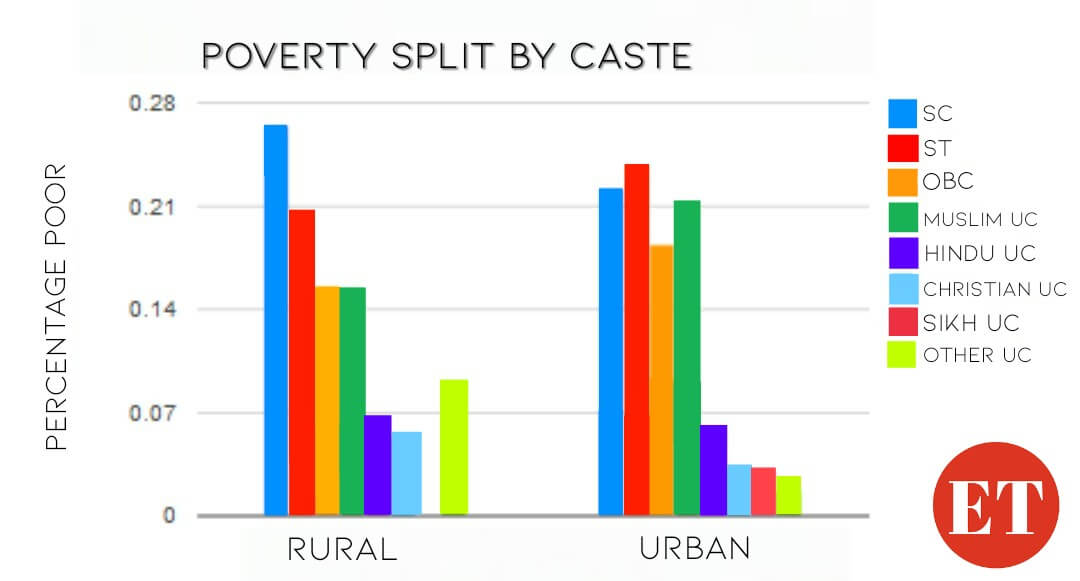 Read out in detail How Is India Changing Under Modi Government?