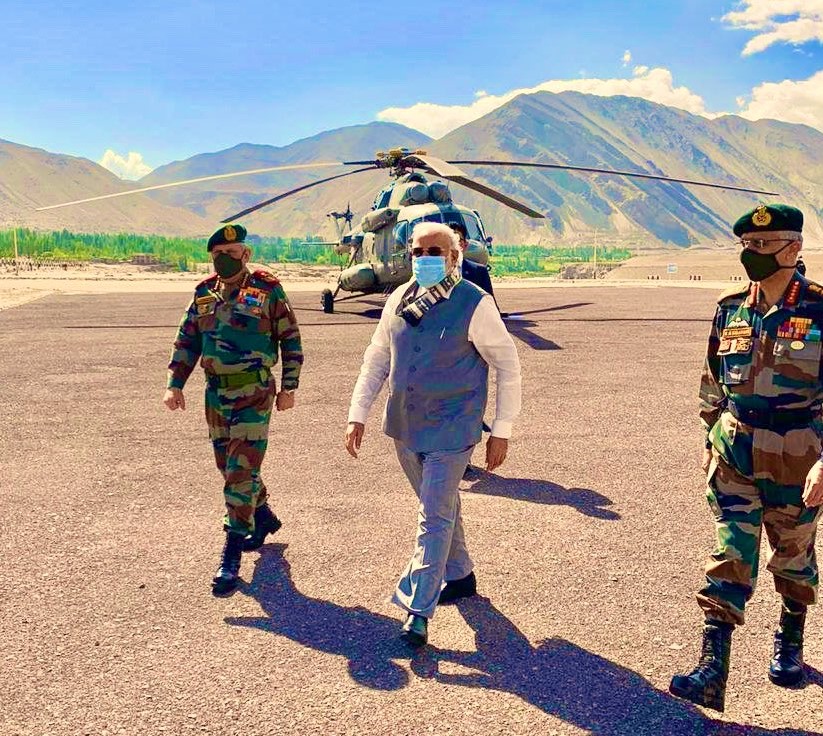 In a Surprising and Unprecedented move, Prime Minister Narendra Modi visited Leh on Friday morning which was aimed to send a strong message to China. According to Sources, The decision to visit Leh amidst the border stand off with China was taken during a meeting held last evening with National Security Advisor, Ajit Doval.

PM Modi, along with CDS Bipin Rawat and Army chief MM Naravane visited Ladakh to review the security situation amid the ongoing border face-off with china. This was the first high profile visit from the executive leadership to the region ever since the border standoff erupted in early May. He met the soldiers who were injured in the clashes, as well as the local military leadership, including Lt. General Harinder Singh, XIV Corps Commander.

PM Modi visited one of the forward locations in Nimu early in the morning. He interacted with personnel of the Army, Air Force and ITBP there. Modi was briefed about the situation at the LAC. Located at 11,000 feet, Nimu is among the toughest terrains, on the banks of river Indus and surrounded by the Zanskar range.

Prime Minister Narendra Modi makes a surprise visit to Ladakh, being briefed by senior officials at a forward position in Nimu. pic.twitter.com/8I6YiG63lF

In his monthly “Mann ki Baat” radio address on Sunday, the Prime Minister had asserted that India has given a befitting reply to those who cast an evil eye on its territory in Ladakh. He had said while the country honours the spirit of friendship, it is also capable of giving an
appropriate response to any adversary.

Paying tributes to the 20 Army men killed in the violent stand-off, Modi had also said India’s brave soldiers have shown that they will not allow the nation’s pride to be hurt.

The visit is also aimed at boosting morale of the army personnel engaged in the seven-week bitter border faceoff with the Chinese troops in the region, sources added.

Defence Minister Rajnath Singh was earlier scheduled to visit Ladakh on Friday to take stock of India’s military preparedness in the wake of a border standoff with the Chinese troops in the region.