Has the Step taken by Sachin Pilot to Fulfill his Political Ambitions Backfired ? 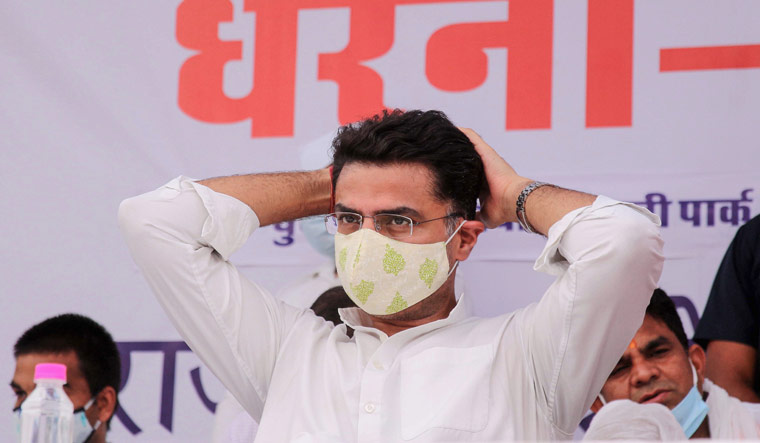 Today at a time when a pandemic like COVID-19 is killing millions of people in the country our political parties cannot seem to focus only on that. In the past couple of days the Rajasthan Political Crisis have emerged out to be a lot bigger than we thought it would actually be. In fact it has managed to bring the party in power that is the Congress to a brink. To understand this situation better we must follow as to what exactly happened that led to this outburst by Sachin Pilot against the Chief Minister Ashok Gehlot and his Government.

On July 12th, 2020 Sachin Pilot the Deputy Chief Minister along with his 19 loyal MLA’s came down to Delhi from Jaipur after the rival disputes of power between the him and the Chief Minister Ashok Gehlot after the issues finally came to surface. Pilot claimed that he had the support of 30 MLA’s and can very easily topple Gehlot’s regime. These claims turned out to be false and only 19 supported Pilot, thus the majority stood by Gehlot. The total number of seats are 107 so even if we consider what Pilot is saying is right even then he would not hold a majority becuase 77 MLA’s would still support Gehlot.

Sachin Pilot son of the well – known Congress Leader Late Rajesh Pilot was born with a silver spoon in his mouth, he hardly faced any struggle in his career; in the 2004 Lok Sabha Elections got elected from the Dausa constituency and came to be known as the youngest man to become a MLA, he was only 26 years old. He then continued to win the Lok Sabha Elections in 2009 and won the seat in Ajmer and eventually in 2014 he was made the President of the Rajasthan Pradesh Congress Committee. But like everyone who has there bad days so did Sachin Pilot, his shining record of winning came to an end when in 2014 he again contested from Ajmer he was defeated by a margin of 1,78,983 votes by the Bhartiya Janata Party’s sitting MLA Sanwarlal Jat. In the 2018 Legislative Elections he yet again won the seat from Tonk. It was presumed that he would be sworn as the chief Minister but to everyone’s amazement he was actually sworn in as the deputy chief minister under Ashok Gehlot.

On 13th July, 2020 Pilot’s office gave out a statement stating that the administration of Ashok Gehlot was in a minority. On the 14th of July after the revolt by Sachin Pilot, Rahul Gandhi and Sonia Gandhi came to Ashok Gehlot’s rescue and tried to handle the situation by calling meeting through the Congress Legislature Party issuing a notice to pilot and all his 19 loyal MLA’s to be present in a meeting which was scheduled to be held at the Chief Ministers Residence if not then strict action would be taken against them. Subsequently, Sachin denied the rumours of him joining BJP and confirmed “ I am still a member of the Congress”. Due to his revolt he was removed from the position of the post of Deputy Chief Minister and as the President of the RPCC on the 14th of July,2020.

Adding fuel to the fire the BJP slammed the Congress Government for not choosing a younger CM for the state and also said that the doors would welcome Sachin to the party. They challenged the fractured party to be open to the floor test in order to test the majority. BJP’s Chief Strategist and Union Home Minister Amit Shah sent the former Chief Minister of Rajasthan Vasundhara Raje to talk down the issues between BJP and the opposition party leader. Interestingly enough when we thought that BJP would support Sachin pilot but Vasundhara Raje who has 42 extremely loyal MLA’s among the 72 seats has a different take on this. If she decides to support him then BJP would look at him as a future candidate for the position of Chief Minister and it would hurt her position, thus yielding her no good and she also has very good relations with Gehlot himself.

When Sachin decided to host a press conference on the 15th of July, he unfortunately had to cancel them has he was served with a notice from the assembly. He vowed to take it to the court and fight for justice. He claimed that he had no power in the decision making as the Deputy Chief Minister.

In the meantime, the political back and forth between the Congress and the BJP over the sound tapes, wherein the Union Minister of Jal Shakti Gajendra Singh Shekhawat and Congress MLA Bhanwarlal Sharma are purportedly heard plotting to bring down the Ashok Gehlot government, proceeded on Saturday with the saffron party requesting a CBI test. “Did the Rajasthan government utilize unlawful approaches to spare themselves when they ended up cornered? Is the telephone of any individual who is identified with governmental issues is being tapped?” BJP representative Sambit Patra said.

State Government should answer whether they indulged in phone tapping as Chief Minister and their other leaders are saying the audio is authentic whereas in FIR it is mentioned as purported: Sambit Patra, BJP on purported audio clip about conspiracy to topple Rajasthan Government pic.twitter.com/6oiOMmyPmE

The Congress reacted to the above cases by saying that the saffron party has at long last admitted to its job in the “murder of majority rule government”. “The BJP has now admitted to its job in the homicide of majority rule government in Rajasthan. Their solitary complaint was that when we were killing, for what reason were we getting recorded and on the off chance that we were getting recorded was it legitimate,” party representative Pawan Khera said.

In a shocking new development in the midst of the political disturbance in the Rajasthan Government, Chief Minister Ashok Gehlot has been called by his own state’s police. This comes not long after the Rajasthan Police brought Deputy Chief Minister Sachin Pilot. The gather has additionally been sent by the police to CM Gehlot who is being approached to make himself present before the police under IPC sections 124 (A) and 120 (B), the two of which relate to offenses against the state and criminal connivance. The letter has asked Gehlot to be available at the Jaipur Police station for his announcements with respect to ‘a certain investigation.’

To rather retaliate Ashok Gehlot made allegations against the Bharatiya Janata Party that they were allegedly poaching Congress legislators through money transfers. He said that the MLA’s were being offered 25cr each but according to him the members were alert, aware and united therefore declined the offer. They claimed that this was a very unsuccessful attempt to destabilise the government and BJP’s lack of faith in democracy clearly shows.

To these allegations the BJP has asked for evidence in order to prove these fact less allegations. Mukesh Parekh BJP’s state spokesperson refuted these allegations and said that “The Congress has failed to manage its own house. There is growing resentment in the party’s rank and file over its failed national leadership”

In conclusion this honestly sounds like a mess. Pilot has the right intentions for questioning his rights and asking for more considering the kind of work he has done but he definitely has a terrible timing. Will he be able to rectify what has done or will this be the end of his career? This issue is nowhere close to being resolved right now but again it is politics so we do have a lot of surprises ahead of us.