AAP vs Bureaucracy- Blockade or Scapegoat for AAP? 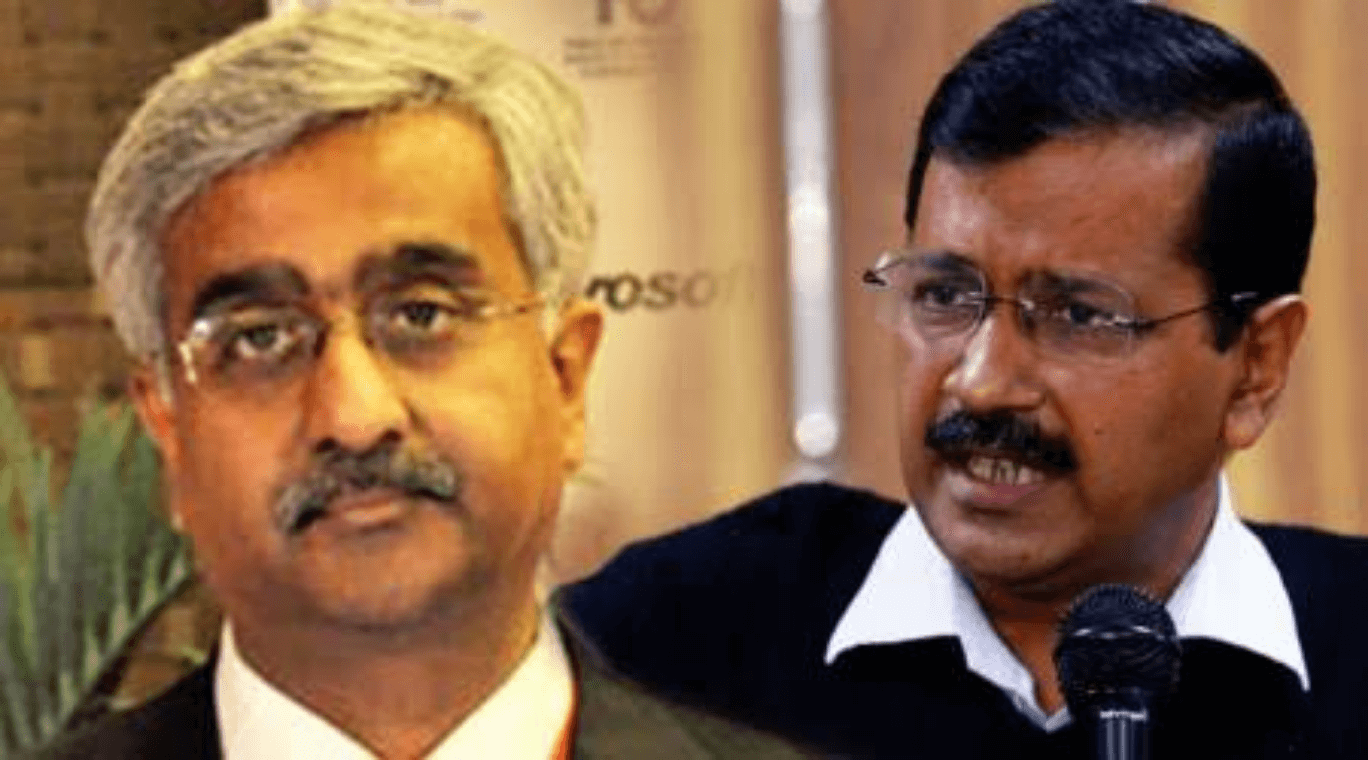 Aam Aadmi Party (AAP) came to power with a thumping victory in 2015. A year when Modi wave came across a broom and was swept away from Delhi. The year now also remains the year where AAP did not walk into bad controversy. AAP’s tenure was seen as a revolution in modern India politics but that hasn’t happened at.

This time though they have entered a dangerous territory, they have picked a fight which very few had dared to pick before them.  The recent incident involving Delhi’s Chief Secretary Anshu Prakash unearths an issue which was lying below the surface for past 3 years. AAP fight with the center on functioning is more of a symbolic one, they are really fighting the bureaucracy. The various transfers and then cancellations were the first major open fight between these two. The new incident involving Chief Secretary Anshu Prakash could now also be the one which will take this fight in open battlefield.

What is the incident which led to this AAP vs Beaurecrats situation?

According to Chief Secretary Anshu Prakash,  an alleged premeditated midnight assault took place on him by 11 AAP MLAs not only at the residence-cum-camp office of Chief Minister but also in the presence, of Chief Minister Arvind Kejriwal along with Deputy Chief Minister Manish Sisodia.

Read more: AAP Government Performance Review: How Much Will You Rate Kejriwal Government In Delhi?

In his FIR, Mr. Prakash says that he was summoned for a meeting on 19th February at CM Kejriwal’s residence. The midnight meeting was to discuss the difficulty in releasing advertisements to mark the AAP’s three years in power.

AAP soon dismissed the charges and alleged foul play by BJP supporters. They complained that an hour after the meeting Ashish Khaitan and sitting Delhi Minister, Imran Hussain was attacked near Secretariat. They say that a mob attacked both of them without any provocation. The mob was also allegedly shouting pro-BJP slogans while attacking them.

For now, Delhi Police have registered an FIR against AAP MLA’s. They have also arrested Amanatullah Khan and Prakash Jarwal.City court ordered both to 14 days of judiciary custody.

What is AAP’s stand on this AAP vs bureaucrats issue?

As the story picked up steam, AAP came in defense of their MLA’s and denied all the charges. They counter-charged the BJP with the alleged mob attack. They said that BJP mobilized up a mob which beat their leaders outside the secretariat.

Later on, they presented their side of the story. According to AAP, the meeting was called to discuss the reasons why about 2.5 lakh families had not been able to get their rations under the PDS last month due to faulty implementation of Aadhaar. They also denied that Chief Secretary was manhandled by the party MLAs and that CM Kejriwal was witness to this.

AAP even targeted the Delhi Police and Lieutenant-Governor Anil Baijal for not registering a case in the incident involving Ashish Khaitan and Imran Hussain. They said that this was another attempt by BJP to disrupt the functioning of Delhi government. To protest against it, AAP even held a protest outside Home Minister house.

How did bureaucrats respond to the current AAP vs IAS issue?

Chief Secretary Anshu Prakash has registered a case against AAP MLAs. He though has garnered much support from his colleagues. Three associations of Delhi, Andaman and Nicobar Islands Civil Service and the Delhi Administrative Subordinate Services passed a joint resolution condemning the “abhorrent incident involving verbal and physical assault of the Chief Secretary of Delhi” to have “only written communication with the political executive” till Chief Minister Arvind Kejriwal apologized.

Read more: How Has The Kejriwal Led Government Performed Till Now?

They have also decided to observe five minutes of silence at the start of lunch. Former bureaucrat Dhir Jhingran also resigned from the Delhi government’s State Advisory Council for Education to express solidarity with Mr.Prakash.

An overview of the current AAP Vs Chief secretary conflict?

The standoff between AAP government and Delhi bureaucracy was coming sooner or later. With AAP trying to bring changes in a system that has enjoyed itself for years. They have tried to compromise with each other for 3 years. In which they made the central government an escape goat.

For AAP they have really hit the wall this time.  They had tried to work with the bureaucracy for 3 years and with not a lot to show. Though they have managed to get a couple of important schemes passed the majority of them are still stuck. This time even AAP know they could be in trouble.  The action of CM Kejriwal meeting L-G Baijal and then making a statement of effect to ask Bureaucracy to get back to normalcy speaks for the quantum of power bureaucracy has.

On part of AAP, they too are at fault. They knew of the challenges they would face in government. Arvind Kejriwal is a member of bureaucracy before joining Anna Hazare’s movement.  They knew what they were going in to but have not tackled it well.

The matter of manhandling accusations is also not new. In 2016, Yogendra Yadav and Prashant Bhushan also accused same people of manhandling. They accused CM Kejriwal of not doing anything and in turn supporting people in doing so. The charges seem pretty similar alleged this time also. This time though it is not an internal party issue.

How does it affect the national prospects of AAP?

When Aam Admi Party started their second term in Delhi they were too proactive on streets. They organized multiple protests against the central government while disrupting their own government in the process. The tag of a movement and mentality of it was not leaving their mindset. It looked like that they were still in movement mode and no the governance model.

They got a shock in Municipality elections with BJP winning it again. AAP then tried Punjab, where they did ok. The expectations within the party though were huge and thus result disappointing. They then did the whole EVM hack incident in Delhi Assembly. Blaming the EVMs has never ever bought anyone any political mileage. AAP figured this out in Gujarat elections where Congress gained but not the AAP.

For AAP now, the state of Delhi is a stage to showcase their ideology and work. The repeated confrontations with central and L-G has dented their plan to do so. People of the nation wanted an alternative to raising but a protesting government has risen in place of that.

Is the bureaucratic fights the reason for Kejriwal’s worries?

When Anna’s movement broke, Arvind Kejriwal emerged as the biggest contender for alternative politics. He formed the Aam Aadmi Party along with his colleagues from the movement. Arvind Kejriwal along with AAP rose through the popularity charts to become a national face. He promised an alternative to usual Congress- BJP-others politics and a face that could take on PM Modi in future.

Arvind Kejriwal along with AAP now has become a one state party with troubles of its own. On the internal front, AAP has already seen a major fight between Kejriwal Camp and Yogendra Yadav and Prashant Bhushan. More recently they had a fight between Kumar Vishwas and Arvind Kejriwal. It seems like CM Kejriwal has himself became an authoritarian if the statements of ousted people are to be believed.

Then we had a couple of alleged scams being unearthed in Delhi. Though the scams have remained just alleged defamation cases are real. Kejriwal along with a couple of AAP workers are facing defamation cases.One from Finance Minister Arun Jaitley and another from Transport Minister Nitin Gadkari. The cases are sub-judice right now but it could be said that Kejriwal is yet to prove the alleged charges and seems like shot an expensive blank one. Both the cases show that Kejriwal has failed in their fight against the corrupt at large levels.

Read more: AAP Government Performance Review: How Much Will You Rate Kejriwal Government In Delhi?

AAP vs Bureaucracy – How does it affect the Governance of Delhi?

For AAP as mentioned above, Delhi is an important state. It is a stage for them to showcase their ability. Up till now their response to this challenge has been lukewarm. One of the major reasons for this is their repetitive fights with center and bureaucracy. In last 3 years of their government, we have seen multiple fights between them which hamper governance.

AAP has thus not been able to fulfill many of their promises. They are yet to deal with Delhi pollution, the odd-even scheme seems like only a passing solution. Surveillance through CCTV cameras all over the city is also a dream. Now we have a case where CCTV cameras of CM residence also not work properly. As reported by Delhi police that CCTV cameras at CM residence are not functioning properly when they checked for footage of manhandling incident.

Where will AAP vs Bureaucracy lead to?

The present incident is now in for being a national matter if AAP MLAs are found guilty. The Police to has started the investigation and arrested two of the MLAs. Security tapes from CM residence were also confiscated by the police.The case now seems will be a long drawn court case. A case whose result could make or break a party’s image.

The conclusion of this case could also have repercussion far-ranging than just Delhi, with Arvind Kejriwal the untainted emerging with a taint of violence. The dream of AAP being a national party has certainly a roadblock for sure.The other side though has very less to lose with blame just going to one person if needed.

The interesting developments to watch out for will be the altercations that could happen between the bureaucracy of Delhi and the elected representative politician of Delhi.