What is India’s role in Syrian Civil War? 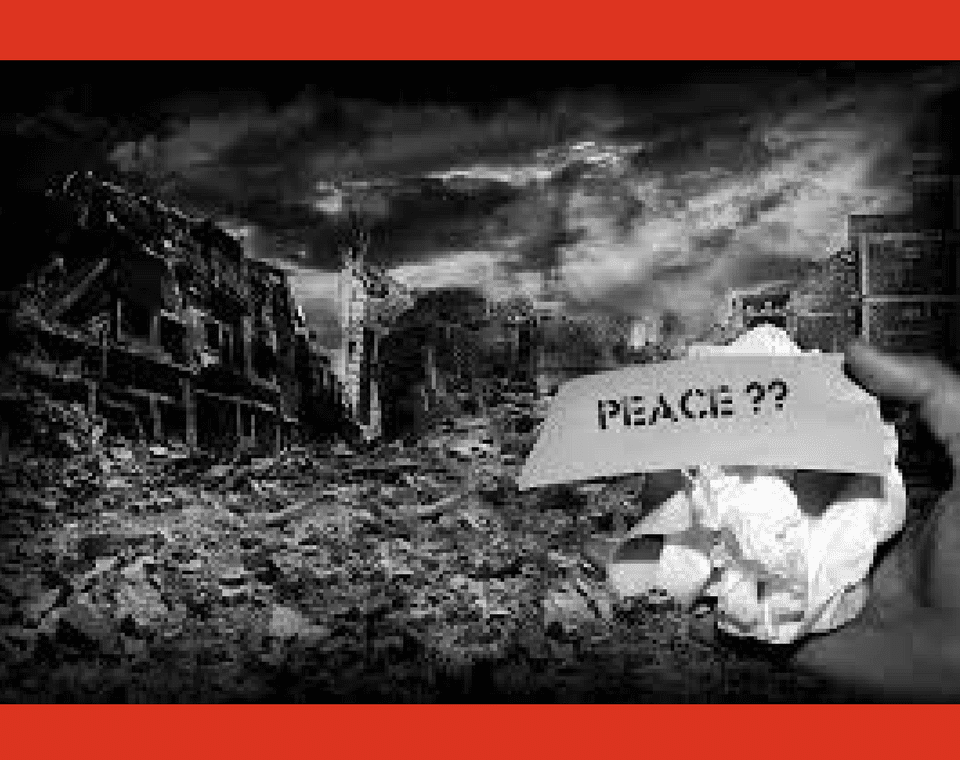 Syria is again in the headlines of world newspapers, as more than 400 people died out of which 150 were kids & toddlers, in past 5 days, including a huge number of people injured in the recent bombarding. More than 400 have killed in the Eastern Ghouta area in Syria. As Syrian government forces supported by Russian warplanes continue to aerial strikes in this area. Let’s dig deeper and try to understand what is India’s role in Syrian Civil War?

Syrian Observatory for Human Rights has said; “The strikes that had started on Sunday has claimed 403 lives. Which includes 150 children as well. Furthermore, 2,120 people had been wounded in a deadly airstrike by Russian Warplanes.” 260 number of rockets by Syrian government forces supported by Russia had crushed into Eastern Ghouta. More than 340,000 has lost their lives in Ghouta itself since the conflict had started. About 400,000 people live in Eastern Ghouta who are surrounded by these troops since the year 2012. The civil war in Syria started on 15 March 2011, & continues to this date.

Every other big or major country has taken their stand on the Syrian crisis in favour or against of the Assad government or in support of any other rebel group. But one thing which is surely questionable is that, what is India’s stand on Syrian crisis? Whether it supports the Syrian government or the rebels? What prevents Indian government from taking a clear stand on Syria on an international platform? What are hidden political agenda for Indians under Syrian crisis? Is it hampering India’s international image? Let’s have an insight view of Indo-Syrian political relations.

Why did the Syrian Civil War start?

The Syrian Civil War is an ongoing multi-sided armed conflict in Syria fought primarily between the government of President Bashar al-Assad, along with its allies, and various forces opposing the government. The unrest in Syria, part of a wider wave of 2011 Arab Spring protests, grew out of discontent with the Assad government and escalated to an armed conflict after protests calling for his removal were violently suppressed.

The Syrian Civil war is being fought by several factions: the Syrian government and its allies, a loose alliance of Sunni Arab rebel groups (including the Free Syrian Army), the majority-Kurdish Syrian Democratic Forces (SDF), Salafi jihadist groups (including al-Nusra Front) and the Islamic State of Iraq and the Levant (ISIL), with a number of countries in the region and beyond being either directly involved, or rendering support to one or another faction.

Syria became an independent republic in 1946 following years of French rule after World War II, although democratic rule ended with a takeover in March 1949, followed by two more regime change in the same year. A popular uprising against military rule in 1954 saw the army transfer power to civilians. From 1958 to 1961, a brief union with Egypt replaced Syria’s parliamentary system with a centralized presidential government.

The secular Ba’ath Syrian Regional Branch government came to power through a successful takeover in 1963. For the next several years Syria went through additional regime changes and many changes in leadership. In March 1971, Hafez al-Assad, an Alawite, declared himself President, a position that he held until his death in 2000. Since 1970, the secular Syrian Regional Branch has remained the dominant political authority in what had been a one-party state until the first multi-party election to the People’s Council of Syria was held in 2012.

On 31 January 1973, Hafez al-Assad implemented a new constitution, which led to a national crisis. Unlike previous constitutions, this one did not require that the President of Syria be a Muslim, leading to fierce demonstrations in Hama, Homs, and Aleppo organized by the Muslim Brotherhood and the ulama. They labeled Assad the “enemy of Allah” and called for a jihad against his rule. The government survived a series of armed revolts by Islamists, mainly members of the Muslim Brotherhood, from 1976 until 1982. Upon Hafez al-Assad’s death in 2000, his son Bashar al-Assad was elected as President of Syria.

The Damascus Spring, a period of social and political debate, took place between July 2000 and August 2001. The Damascus Spring largely ended in August 2001 with the arrest and imprisonment of ten leading activists who had called for democratic elections and a campaign of civil disobedience. In the opinion of his critics, Bashar al-Assad had failed to deliver on promised reforms. This has become a series of conflicts between Syrian government & different faction groups, but the ultimate suffer are the innocent local residents of Syria.

Here is all you need to know about India-Syria relations –

Initially, Syria, the only Arab member in the UNSC in 1948 had supported Pakistan on the Kashmir cause and had irked India by extending support to the Nizam of Hyderabad on the behest of the Egyptians. This resulted in India giving recognition to Israel in 1950, much to the dismay of the Arabs. The basis of Indo-Syrian partnership emerged later with the ascendancy of the Non-Aligned Movement leader, Gamal Naseer, as the President of the United Arab Republic (UAR, a union of Syria and Egypt). Naseer, by maintaining strict neutrality over political issues, allowed relations to prosper despite Pakistan’s efforts to achieve Islamic solidarity on the Kashmir issue. Thus, the Egyptian and Syrian alliance of the UAR (1958-1961),[9] consolidated Syria’s position on the issue of Kashmiri self-determination, which has been India’s Achilles heel in its relationship with the Organisation of Islamic Cooperation.

What is India’s role in Syrian Civil War?

The last visit by Syrian foreign minister was in 2016, where they had a positive outlook towards India’s stand on civil massacre happening in Syria. The Syrian regime has long sought India’s support and diplomatic involvement in the conflict. They also backed India’s attendance at Geneva II. India has steadfastly opposed foreign intervention to oust the regime (as seen in India’s statements and votes at the UN). The Assad government sees India as a potentially influential, though quiet friend. The Indian Ministry of External Affairs (MEA) website, states that during the current unrest, “Syria has deeply appreciated the support…from India other members of BRICS at the UNSC”. Yes, India is a supportive but ‘quite’ because of it’s own political interest lies in it. India’s stand on Syrian Civil War is neutral. India has neither explicitly condemned the warring factions which are party to civil war nor it is supporting any faction be it Assad regime or rebels led by Free Syrian Army (FSA). India has so far avoided to critically condemn the atrocious behavior of ruling Assad regime. Only sporadically India issued statements against gross violation of Human Rights in Syria by ruling dispensation that too in very mild language.

India refraining from taking any sides, they just have condemned the mass killing & loss of young souls in Syria. One estimated reason for this move by India can be, taking sides with either faction whether ruling Assad regime or rebels would have repercussions upon India’s ties with either Iran and Russia on one side (if India endorses position of rebels) or the USA and its allies like Israel, UAE etc. (in case India supports Assad regime). So going by diplomatic precedents, India has so far not articulated its conclusive position with respect to Syrian Civil War though intermittent statements are issued by the government when any condemnable action like recent chemical weapon attack occurs. Such ambiguous stand is in the best interest of India as it would help to balance Indian Foreign Policy with respect to its engagement with USA and west on one hand and Russia on other. Also, Syria is depending upon the BRICS  nation for its reconstruction one of the biggest aid providing nation for them is China, so India is being very calculative with its steps towards Syria & observing every move by China very clearly.

Also, India doesn’t want the extremist groups of rebels (backed by the USA) to win as they fear Islamic extremists are intending to find a new haven in Afghanistan, which happens to be pivotal for India’s interests in South Asia. Since ISIS has expanded its reach to Bangladesh and has found support in the volatile region of Kashmir, India’s concerns now seem extremely valid. In all, there is enough reason for skepticism and lack of confidence in the opposition’s ability to guide Syria, especially when the civil war has turned out to be less of a “people’s revolution” and more of a “proxy war” between regional rivals, each with their own geopolitical objectives. & this can lead to a major disruption in already disturbed Kashmir Valley.

Read more: Does India Need A Presidential Form Of Government?

Another reason for this quite stands can be the relation of India with USA, Russia & other Gulf countries. As usual USA & Russia are on different polls & India doesn’t want to spoil it’s own international tie-up with these two big powers at such a crucial moment, when India is about to be the next influential world leader. Also the recent tie-up between the two biggest rivals of India, that is Pakistan & China, who have consolidated their power together to counter India. That’s why India cannot afford to take any chance of losing the support of these superpower nations. Also, India has its own dynamics with the Gulf countries like Saudi Arab which we cannot spoil at this time when we need them at most.

The recent visit of Indian Prime Minister to Israel had upset the Syrian government & made them unsure about Indi’s stand on Syria. “Allow me to say that the Syrian people are very disappointed with the visit of Prime Minister Modi to Israel because Israel is an occupying and a colonial force which has deprived Palestinians of their indigenous rights. We never expected India will move from its righteous and moral stand and pay that huge courtesy to Israel,” Shabaan, a frequent visitor to India. She further added, “I can say that while we call for a role for China and a role for Russia, we are very hesitant to call for a role for India (in rebuilding Syria).” The  Syrians were saddened by Modi’s visit to Israel, it is willing to look at a “pragmatic relationship” with India.

How is India contributing to Syrian Civil War?

India has a number of interests and values which forms the bases for its position on Syria.

The civil war in Syria started in 2011 will complete it’s 7 years on this 15th March 2018, which is not an auspicious anniversary to celebrate for anyone. Till now 400,000 people have died in Syria, Which is one of the biggest massacres in the 21st century. Is it so difficult for superpowers like USA & Russia to stop these mass killing for one’s sake for all? Clearly, their political interest lies in It, which divides their stand. All the superpower are divided in accordance with their self-interest & no one is backing innocent Syrian voices which are making humanity suffer. Even though India has its own silent support for Syria with open-doors for refugees & financial aids, is it enough for a country like India which has a big say in world politics? What is the stand of different government on this, is a political debate, but its time for us, the common citizens to consolidate their power & force these big heads to take some serious action keeping aside their own self-interest for the sake of humanity. Let’s raise our voice for those hundreds & thousands of Alan Kurdi’s who lost their lives in this war for power, let’s shout-out so loud that even bombardments can’t be heard.