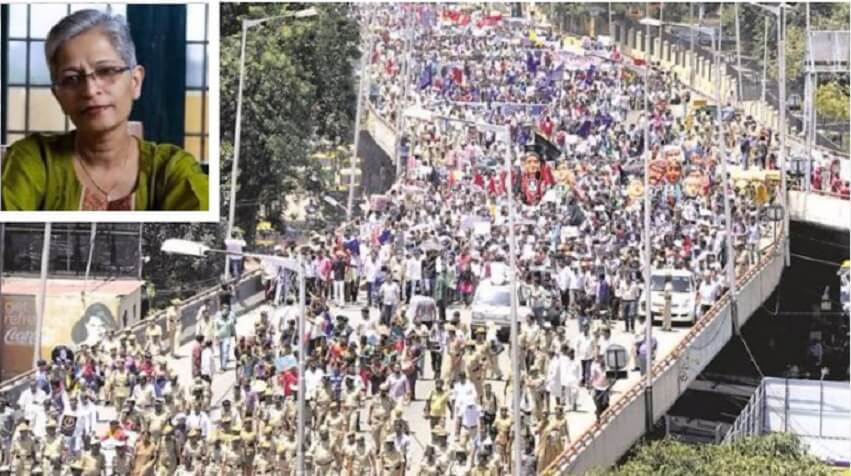 In the past few weeks, there have been certain incidents that have had a deep impact in the minds of the Indian public. One such incident has been the cold – blooded killing of Kannada journalist, Gauri Lankesh on 5th September 2017. She was reportedly shot outside her house in the posh locality of Rajarajeshwari Nagar by three unidentified men in Bengaluru.

Twitter was flooded with tweets about the murder; some condemned it while the others made fun of it. One of tweets that caught everyone’s attention was a tweet by a resident of Surat who was followed by the Indian Prime Minister, Narendra Modi. This led to the blocking of Narendra Modi by many twitter users. Let us dwell into the issue more, to know the reason behind the Block Narendra Modi Campaign and it’s after effects.

According to sources, the Karnataka police was suspecting a Naxal twist into the Gauri Lankesh murder, as she was reportedly getting threat calls and messages by Naxalites. But bring a political angle into it; Congress began blaming BJP and Narendra Modi

Prime Minister Narendra Modi was following an account on Twitter that had supposedly spread hate messages on the death of Gauri Lankesh. This became the reason for targeting and boycotting Narendra Modi.

Instantly, a trend on the lines of #BlockNarendraModi began to surface on the Twitter trends. The only goal of this trend was to block Narendra Modi. The Twitteratis did not stop at this; they also threw abuses on Modi and the right wing blaming it all on Hinduism.

How did this campaign take a U – Turn?

None of the Twitteratis understood the reason behind blaming Modi for the death of Gauri Lankesh, but Congress was successful in launching its campaign.

But after a while, the campaign took a U – turn, when the people started to blame Rahul Gandhi and block him for his immaturity in politics.

The elections are about to arrive within the next two years, and Congress is trying its best to do a comeback in the upcoming elections. This might be one reason why the Congress stalwarts are evaluating each move of the BJP government and criticizing it, to make their presence felt.

Gauri Lankesh was killed in the Congress ruled state of Karnataka, but Congress blamed the BJP for the same.

Politics has stooped down so low, that the death of a journalist is being played as a political tool. Congress should at this point, be finding the real culprit behind the death rather than leading the blame game.

This is not the first time that a journalist has breathed her last while finding the truth. There have been numerous deaths of journalists in the last a few years. The irony being that some of the deaths of famous journalists have occurred in Congress ruled states.

Here is the list of some famous journalist who was killed in Congress ruled states:

MM Kalburgi – Killed in a similar manner as Lankesh, Kalburgi was killed in 2015 at his residence in Dharwad, Karnataka. He was shot dead by two unidentified men who used a pistol of 7.65 mm, similar to that of Gauri Lankesh’s murderers.

Also Read -   What is the Strategy of BJP for Karnataka Assembly Election 2018?

Govind Pansare – On February 2014, this leftist journalist and activist was shot dead by two unidentified men while he was returning home from his morning walk in Maharashtra which was under the governance of Congress at that time. Samir Gaikwad, a Sanatan Sanstha activist was arrested but later was granted bailed.

Narendra Dabholkar – This rational journalist was shot dead by two unidentified men on bike during his morning walk in Pune. He died on the 20th August 2013.

According to a CBI charge sheet filed in September last year, Akolkar and Pawar, two of the right-wing organisation Sanatan Sanstha members, killed the rationalist. In June 2014, the case was transferred to the CBI after the Pune police failed to get any lead.

The four deaths show some connection – the journalists supported anti-establishment. They critically evaluated the moves of the government and criticized the move if required. The weapons of the deaths have been reported to be the same, the timings of three of the deaths that of Kalburgi, Pansare, Dabholkar have some commonness as all of them were killed in the morning.

In the Indian subcontinent, politics plays an essential role. The opposition and the ruling party play a very important role in providing good governance to the country. The decision taken for the public should be in consensus agreed both by the opposition and the ruling party. Being a federal country, the state government and central government should work in coordination even if at opposition.

In this scenario, the disturbance at the centre level between both the parties is clearly visible. Instead of working against each other, the Central government and the Karnataka state government should work in coordination to find the culprits and give them the deserved punishment.

Healthy politics is the need of the hour –

Healthy politics is needed for the running of a democratic country. Having an opposition is important to keep the ruling party in check. But these days, politics has stooped down to a new low. Politicians have applied cheap tactics to downplay the other party and bring them into a bad light. There is no certainty that they would be working for the interest of the public.

This generates issues in the governance of the country. Death in itself is a very sensitive issue and playing politics over is immorally and ethically wrong. Maintaining the standards of politics is a very significant factor for a democracy to flourish.