The Bangalore Riot has yet again exposed the saga of pseudo secularism, opportunism and fake victimhood

The recent trend in India is all about selective secularism, opportunistic behaviour, and fake victimhood. Anyone with a sound mind will agree to it. There are several such incidents but let us take the recent Bangalore violence.

On the 11th of August, 2020, an intolerant, angry mob from the Muslim community attacked MLA Akhanda Srinivasa Murthy’s house, set fire to the cars parked outside his home. Another group attacked the KG Halli police station demanding the police to take action against the MLA’s relative P Naveen to post a derogatory reply to an already existing derogatory post on Facebook. The fire tenders were rushed to the spot but the mob didn’t let them pass through. An official said, “The mob did not let our vehicle inside and vandalised our vehicle as well. The mob has burnt down two cars, five bikes and an auto.” The force that was sent from various parts of the city to help the colleagues at the station and the MLA’s house met with bricks, stones and petrol bombs. Around 60 police personnel got injured in this completely useless violence over a useless post that could be dealt with in various other ways including a demand for a public apology.

Almost everyone by now knows the incidence but what they do not want to openly call out is the intolerance of the mob. Any social media post no matter how derogatory should not become a reason for so much destruction. This started when a Muslim named @alif_bas on twitter wrote, “Either Krishna was a womaniser or Radha was a whore.” 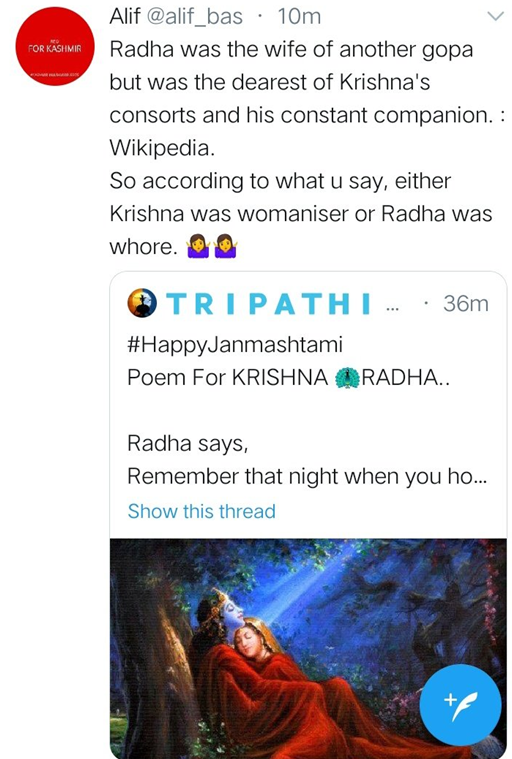 To this P Naveen replied through the picture given below. 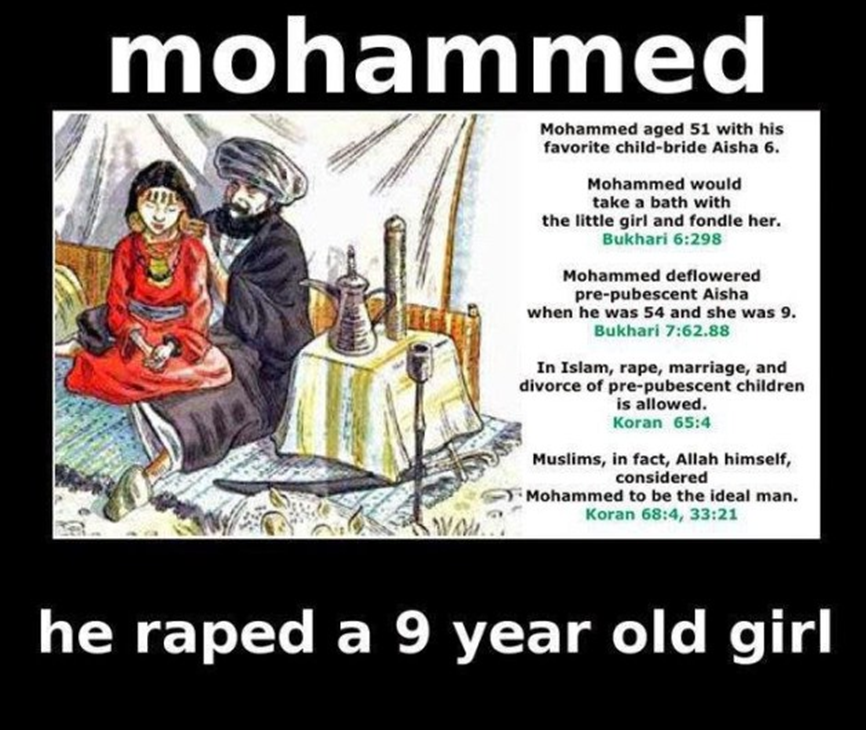 So, if Hindus do not choose to burn Muslim households for continuous insults and abuses for their deities, then why should Muslims create communal violence? Are secularism and tolerance not their values? Or does everyone forget that Muslims too have to live under democracy and not under an Islamic state?

The shock came from the journalists that align themselves with the so-called ‘left’ ideology. They chose to present it as a situation of law and order where vigilantism needs to be dealt with. The tone and words, however, differ with different religious sects. 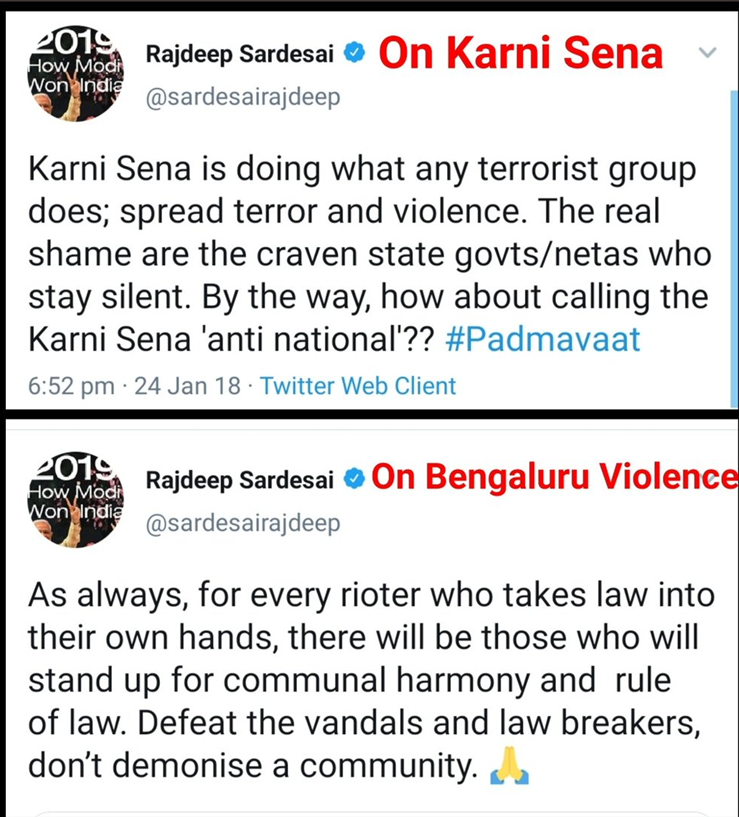 This is not just another situation of law and order. As long as a particular group is pampered by pseudo secularists of this country, they will never learn to accept the harshest of truths without creating a riot like situation in the country. Why can one discuss just every other thing in the name of research and pass remarks as spiteful as possible for every faith in this nation except Islam? Why should one get on the streets and try to kill people in the name of God? Why can one tag Krishna as a womaniser with his whores but the other not reply in the same tone? And if at all he does, why should the matter on social media that can be reported, shamed, flagged, be dragged to streets to vandalise life and property of those who had nothing to do with it? One would say lack of education is the real problem, but the ones who are well tutored from the reputed top 100 universities of this country also stay mum and give cover fire to offenders and blame the victims. They appease a section of this society for votes at the cost of security, peace and freedom of expression of this nation. Their hues turn rebellious the moment a Hindu vigilante fires a gun and all of sudden saffronization is on the rise. The entire thing has occurred from time to time in various versions and forms. Political leaders like Owaisi had openly threatened Kamlesh Tiwari for something similar. And, hardly the left chooses to condemn Hindus getting lynched the way they do for unfortunate Muslims lynched under suspicion of smuggling.

Listening to the above speech of Asauddin Owaisi one cannot confidently say freedom of speech is allowed when it comes to criticism of Islam. Why do politicians in this country selectively choose to stand for the victims of intolerance? Why is being a proud Hindu not taken well if being a proud follower of Islam even a thing? Why is the majority of this country continuously blamed for communalism when most of the times the drama on streets emerges from the other side?

As long as the people of this nation, the government, in particular, give a free pass to people to damage public property and politicians and clerics dare to announce a bounty of 51 lakh for P Naveen’s head, nothing is going to change.

Shahzeb Rizvi of Meerut has announced a 51 lakh reward for beheading the nephew of Congress MLA in Bangalore who put up the Facebook post. https://t.co/KJtTQP1v9w

“An FIR has been filed against former SP leader Shahzeb Rizvi, who had announced a bounty of Rs 51 lakh on Karnataka Congress MLA’s nephew Naveen’s head over an alleged ‘blasphemous’ Facebook post. Rizvi had also asked members of the Muslim community to contribute money for the bounty.” writes Opindia. The victims will be shamed and blamed, the legal actions will, however, differ from party to party interests. Appeasement politics has only ruined this country since independence and will continue to do if the appeasers are voted to power.