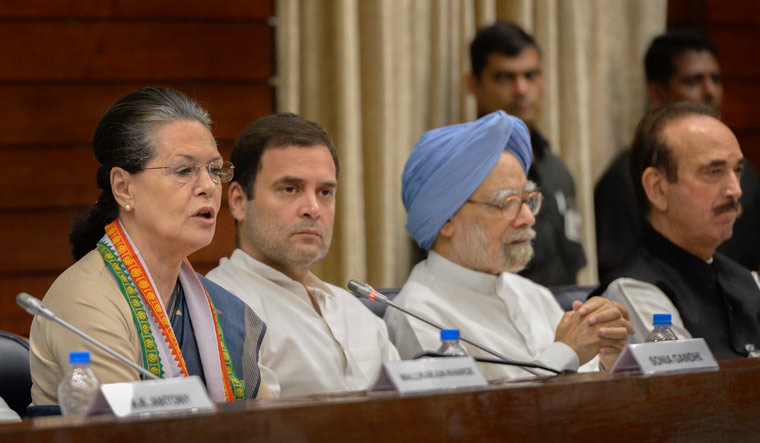 23 leaders wrote a letter to Sonia Gandhi demanding transparency about the leadership Congress had after losing elections twice in the National level.

Rumours have it that Sonia is upset over the letter written by senior party leaders wherein they raised questions over the party’s current circumstance and called for full-time active leadership. She the, recognized retiring as the Party Leader, President and has no intention of looking back. She has already notified KC Venugopal, the Organizational General Secretary of the party, to look for a replacement at the earliest.

The letter directly questioned the Gandhi Rule in a line that mentioned –“ The Gandhi’s will always continue to be a part of the collective leadership of the party. “ It is a change from the exclusive commander than the Gandhi Family had , backing them.

Indira Gandhi has been the Party president since 1999. Back then, Sharad Pawar and Purno Sangma challenged her at the Congress working committee. That was the first time she resigned. She joined back as the Party President. But for her to come back is highly unlikely considering the current scenario. She was immensely disturbed by the thought that the letter was released do the press after her assurance of addressing the issues listed.

She has been a part of every major development for the past two decades and has made decisions for the party. Indira Gandhi leaving, would be a major drift for the party as well as the current party politics. Former Chief Minister of Karnataka Siddaramaiah said the questioning of Gandhi’s  as “unfortunate”, by saying that “we should collectively strive to strengthen Congress & not weaken it”.

What does it mean?

In a breaking advancement, initiating the process of finding a new chief would be very unusual and unexpected. Yet for the stalemate to end, Rahul Gandhi’s chance of returning is less, if not at all. But he getting into power would lead Congress around exactly the indistinguishable situation that it is now, he being a Gandhi himself. Sonia Gandhi too, wants some other non-Gandhi to be the chief after these accusations.

Several Congress leaders, MPs and ministers on Sunday backed the Gandhi family amidst growing unrest with the party deeply divided on the leadership issue on the eve of the crucial Congress Working Committee (CWC) meeting.

But then if the CWC members could offer their resignations and allow Rahul Gandhi might directly have a shot at it after Sonia Gandhi straightaway. According to sources, Rahul Gandhi will return if he is given a free hand to pick his committee.

Whilst the 23 leaders gave their opinion of not wanting to be led by a Gandhi, many members of the Congress Working Committee (CWC) unanimously urges Sonia Gandhi or her son, Rahul Gandhi to take over the reins on Sunday. Dr Manmohan Singh and A.K Anthony amongst others also voucher for the family’s support.

Kamal Nath, Former Madhya Pradesh CM asked the Congress party president Sonia Gandhi to “give strength to the Congress Party” by continuing to be their leader.  Chhattisgarh CM Bhupesh Baghel petitioned MP Rahul Gandhi to come back and rule the party, whereas Congress leader Adhir Ranjan Chowdhury said, “Congress is only safe in Sonia Gandhi and Rahul Gandhi’s hands”.

Chowdhury maintained that the combined energies of Sonia and Rahul Gandhi made for a “winning combination”, according to him Congress should cheer this ongoing “otent formula”. He recalled Sonia Gandhi’s leadership in 2004 Lok Sabha elections contending that Sonia Gandhi has never been hungry for power.

Many believe that without the Gandhi sentiment, Congress wouldn’t be the same.

Who could be the next president?

Malik Arjun Kharge, the Dalit leader has a real shot at this. Meera Kumar being a Congress loyalist and the former Lok Sabha Speaker is also running the race of possibilities.

Zonal presidents – Sushil Kumar Shinde, Tarun Gogoi and Chidambaram from the west, east and south is to be considered. Although, senior leader P Chidambaram has lesser chance in having the role of president despite having neither interactions with Sonia Gandhi and this matter.