Gujarat Assembly Elections 2012: Why is it considered as a landmark event?

The 13th Vidhan Sabha elections in Gujarat were conducted on 13th and 17th December 2012. The Gujarat assembly elections 2012 were held for all the 182 seats, out of which 92 seats were required for a clear majority. Narendra Modi, the sitting Chief Minister of the state was running for his fourth term. The leader of the opposition was Shaktisinh Gohil of the Indian National Congress (INC).

The two major parties in the state, BJP and INC fought the elections with different promises and manifestos. Both the parties promised improved in different aspects of development in Gujarat.

The BJP pledged to introduce an improvement in the field of education, health, irrigation, agriculture and animal husbandry, employment, forest, environment and climatic changes, food security, revenue, power and other energy sources, drinking water, urban development, infrastructure, and tourism.
They also promised development of the deprived, youth, women and children. For improving women and child development, the party promised –

• A policy will be introduced with a goal to encourage positive attitude among families towards the birth of girl child.
• Introduction of Vidya Laxmi Bond Scholarship programme to reach for girls studying in government schools.
• In order to impart justice, setting up of Nari Adalats(Women Courts) in more taluks.
• Improvement of government facilities for pregnant women and infants.
To promote the youth of the state, the party pledged to introduce certain policies to attain their aim. The policies that the party manifested on focused to improve sports in the state.
Efforts were also made to introduce Gujarat on the global platform. To reach there, 13 Special Investment Regions (SIR) were to be developed. The idea of smart cities was to be introduced to build modern and well-planned cities. Gujarat was to be made a fully gas-based economy.

On being voted to power, the party pledged implementation of Sachar Committee report which advocated granting of more facilities to the minority Muslims in order to bring them to the mainstream. The Gujarat Congress Committee chief Arjun Modhwadia while reading the manifesto, also announced to provide improved irrigation facilities, construct more small and medium dams, offer VAT – free fertilizers to farmers and ensure regular supply of electricity to them.

Promises were also made to reduce the cost of diesel, petrol, and LPG to make it cheaper. The party pledged the implementation of Sixth Pay Commission recommendations, right to education for all, setting up of fishing harbors and providing insurance coverage to fishermen. It also guaranteed the revival of small-scale industries and setting up of more industries in backward areas where 85% or more employees will be recruited from the local population.

Overall, the manifestos of Congress was based on the consideration of basic requirements of each and every section of people.

The process of elections was divided and held in two phases, the first on 13th December and second on 17th December 2012

.
Phase I of Gujarat Assembly Elections 2012

The phase two of the polling process was held on 17th December 2012, where around 71.85% of voters participated in the polling. The main focus in the second phase was in North Gujarat, Central Gujarat, Kutch, and Ahmedabad.

The Gujarat Assembly Elections 2012 was a landmark event which significantly showed a change in the voting pattern, compared to that of the previous six elections starting from 1980. The average turnout percentage had dropped from 64.39% in 1995 to 59.77% in 2007 state elections.

This was possible due to the work was done by the Election Commission to make this election a well-executed task. The Election Commission made considerable initiatives to promote awareness among the people about the voting rights. They also distributed Photo Electoral Roll, which also proved to be a factor that promoted higher average turnout. 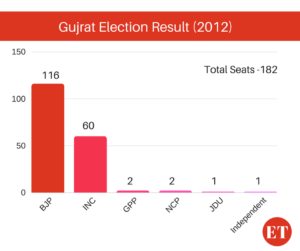 The results for all the 182 seats were declared on 20th December 2012. Bhartiya Janata Party won the elections with a clear majority of 116 votes and formed the government for the fourth time. Indian National Congress won 60 seats and became the leader of the opposition.