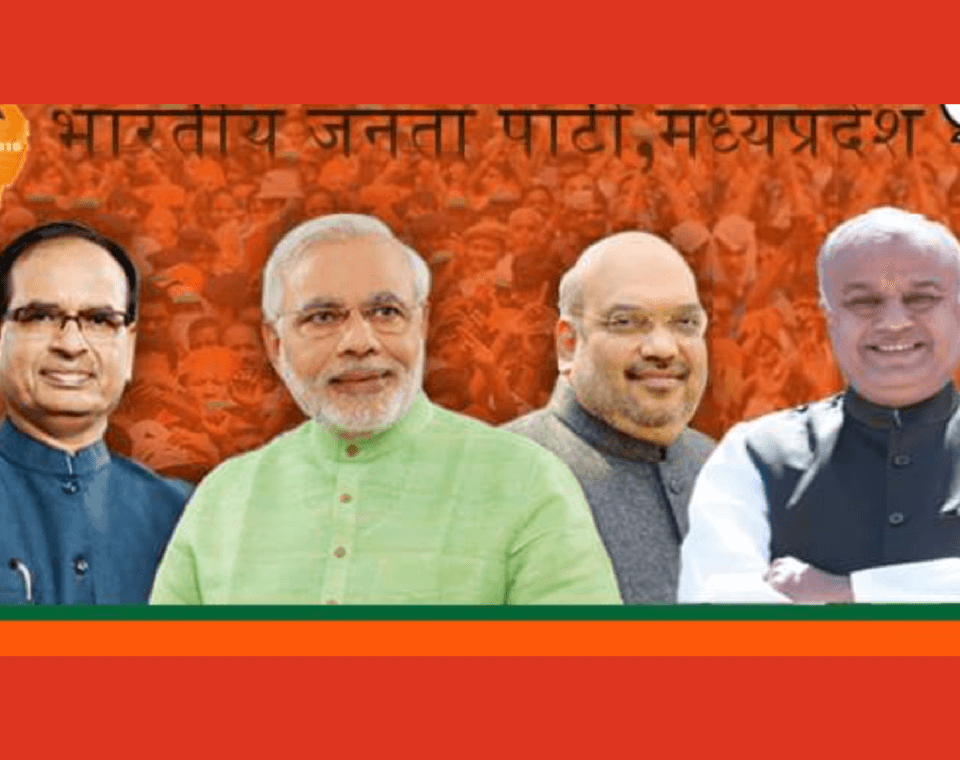 The countdown for the Madhya Pradesh assembly elections 2018 has begun and both the national parties, the Indian National Congress and the Bharatiya Janata Party are gearing up to conquer the throne of the second largest state of India. Elections are scheduled to be held in the month of the November. Madhya Pradesh assembly elections 2018 are important for both the parties as, for Congress, it is a chance to rewrite the history by completing the story of victory, which was left incomplete in Gujarat. On the other hand, it is very much important for BJP too as they cannot lose to Congress at this crucial moment when 2019 elections are around the corner, also they have to compensate for the damage during Gujarat elections. Thus, our country is awaiting to host biggest political battlefields in the heart of India during November.

Not only M.P is the second largest state of India, it also holds political significance, as M.P holds 40 seats out of 543 ( +2 Anglo-Indians) in Lok Sabha and a population of 72,597,565 approx. 73.34 million people & ranks 5th in terms of population in India according to 2011 census. Besides the factual significance, M.P is seen as a battleground for both Congress & BJP.

For Congress, it’s an opportunity to rejuvenate the race & avenge the Gujarat loss. It just missed the chance of making government in BJP’s home ground & BJP had managed to save Gujarat with hand full seats. BJP got 99 seats & Congress managed to secure 77 seats out of 182 seats. Though BJP had retained its power in Gujarat, it seems to be the biggest scar on BJP’s image, as it almost lost its home ground to Congress. If Congress manages to win the M.P elections it may not only come back to the 2019 election race but can also strengthen the roots of Rahul Gandhi & his position in Indian politics, whereas the M.P elections have become a matter of prestige for the BJP.

The state is governed by BJP under Shivraj Singh Chouhan. Already BJP is facing lots of criticism due to the Gujarat results & to fix their image they need to retain M.P. More than a political bid it has become a ‘matter of prestige” for both the parties, where one wants to revive its history while other wants to retain its power.

BJP president Amit Shah has announced that Chief Minister Shivraj Singh Chouhan would lead the party’s fight in the Madhya Pradesh assembly elections 2018. BJP is ruling in M.P since 2003 & Chouhan has been the Chief Minister of M.P since 2005 that means Chouhan has ruled M.P for more than 13 years, that’s why Amit Shah has no hesitation in coming up with Chouhan’s face for next assembly elections.

During their reign, BJP had been alleged of various scams in their pockets. Launching a blistering attack, Madhya Pradesh Congress Committee president Arun Yadav alleged that the State Government has allotted land worth `500 crores’ to RSS in various cities by circumventing the rules. It didn’t stop here, they have been alleged with a number of scams including Vyapam, illegal sand mining, 2500-crore Simhastha scam, dams and ponds scam, mid-day meal scam etc. Let’s examine some of these scams closely & assess future repercussion of these for BJP.

Vyapam scam and its effect on Madhya Pradesh assembly elections 2018 –

Starting with the biggest scam of all ‘the Vyapam scam.’ The Vyapam scam was an entrance examination, admission & recruitment scam that was happened in Madhya Pradesh in 2013. It involved politicians, senior and junior officials and businessmen systematically employing imposters to write papers, manipulate exam hall seating arrangements and supply forged answer sheets by bribing officials.

The scam involved 13 different exams conducted by Vyapam, for the selection of medical students and state government employees, including food inspectors, transport constables, police personnel, school teachers, dairy supply officers and forest guards etc., where the final results were fixed. The exams were taken by around 3.2 million students each year, many of whom were actually paid proxies for other undeserving students.

It also included an “engine-bogie” system wherein seating arrangements were manipulated so that a paid smarter student was seated between two others to allow the latter to copy answers from the former. It is one of the major blots on Chouhan’s face.

Now coming to the allegation of illegal sand mining on Chouhan’s government. The state government has banned sand mining in Narmada plan in 2012 but Only 30 percent of the sand mining happening is legal. Only the legal mining has been banned, but, about 70 percent of mining is illegal. The sand ‘mafia’ is governing & bending the rules in their favour & also accused Chouhan’s nephew’s involvement in it. It has created unrest amongst the legal dealers.

Read more: Madhya Pradesh Elections: Why BJP And Amit Shah Should Be Worried?

Simhasth scam, a scam of Rs 1,500 crore by the Shivraj Singh Chouhan government in organising Simhastha Kumbh in Ujjain in 2016. State Congress chief Arun Yadav said a six-member fact-finding committee of the party led by deputy Leader of Opposition in the state assembly, Bala Bachchan, has submitted a report on the expenditure made by the BJP government on Ujjain Simhastha in April-May 2016. Yadav claimed that in response to questions, the state government recently informed the Lok Sabha, that it spent more than Rs 4,471 crore on Ujjain Simhastha.

“However, during Assembly’s monsoon session, the government stated that it had spent just over Rs 2,000 crore. The difference of over 2,450 crore needs to be highlighted before the Lok Sabha Speaker and the Assembly Speaker for suitable action,”. & now the opposition is cornering the government on this.

Also Read -   What is the future of India-US relations?

And lastly talking about one of the major issues- the farmer’s suicide in M.P where more than 26 lakh farmers have taken farm loans worth Rs 13,000 crore from co-operative banks, says bank sources while the latest national crime record bureau (NCRB) claims that 11,000 farmers have committed suicide in the state in the last nine years. These statistics rise every year & suicide rate of M.P farmers are increasing every year. Ironically, Madhya Pradesh has registered a record 20 percent agricultural growth in the last few years, which happens to be a world record. But these records seems to be useless for the farmers as they are forced to commit suicide.

Although Chouhan government claims there is no possible threat of anti-incumbency in the state but the recent civic poll results say a different story which may stress the Chouhan government. Congress bagged 20 out of 24 seats in Ragogarh civic body elections in Madhya Pradesh, while the ruling BJP has won four wards. In Chitrakoot, Congress nominee Neelanshu Chaturvedi won by 14,133 votes, the party’s biggest margin here in the last 14 years. Though BJP has been ruling the Madhya Pradesh for 14 years, it won the Chitrakoot constituency only once in 2008, that too by a mere 722 votes. And in 2013 assembly polls, the BJP lost Chitrakoot again to the Congress by 10,970 votes.

The results of Madhya Pradesh Municipal Council Elections 2018 and Madhya Pradesh Municipal Bypolls where declared on 20th January 2018. A total of 20 municipal bodies (Nagar Palika Parishads and Nagar Parishads) went to polls and bypolls in 10 districts of Madhya Pradesh. Voting was held on January 17. It is being said to be a fight between the Congress and the BJP in the ‘semi-final’ of the Madhya Pradesh Assembly Elections 2018. The BJP is in power in 13 of the local bodies that went to polls and Congress rules 7. Though BJP won 13 bodies, the results are considered to be alarming as the popularity of Congress in the state in increasing day by day.

Chouhan should start considering the Congress as a threat to their long-term government, whereas, this could be a positive sign for the Congress, a new beginning in Madhya Pradesh after more than a decade. The speculation of popular faces for C.M candidature in M.P is Arun Yadav who has been working hard in M.P & not leaving any chances to target the government. Or Digvijay Singh who has tasted victory in the M.P decades ago. There are speculations of new & young faces also, different names have been speculated under media, but as of now the cards of the Congress remain under suspense. 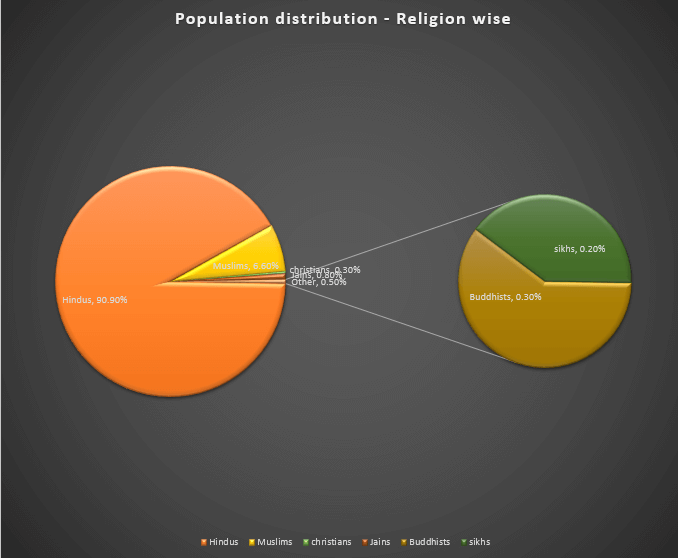 BJP has been marked as a ‘hindutva’ or ‘hindu’ party since ever, & the population distribution makes it easier for the BJP to conquer the ‘heart of India’. They very easily consolidate over the Hindu majority which is 90.9% of the total population, & hence they are tasting the fruits of victory year after year. The statistics in M.P is quite simple & clearly resembles why the BJP is emerging victorious every time. In spite of winning, the latest civic poll had stressed out BJP to an extent as they cannot ignore the rest seven bodies and they should be quite skeptical after what had happened in Gujarat.

Who will win the war of Madhya Pradesh Assembly Elections 2018?

Though Congress is showing improvement in the state, there is a long distance to cover for the Congress. The BJP will be playing the trump card of ‘hindutva’ in the upcoming elections, now Congress has to work hard & think out of the box to remove a decade-old ruling party from the state. For now, we can only say that M.P has a spark of anti-incumbency, now it depends upon Congress whether it gets success in initiating the fire or the ‘Modi wave’ manages to douse the spark.

BJP with its everlasting Modi-shah duo combined with Chauhan’s clever strategies and pro-hindutva agenda, in spite of facing few difficulties owing to scams, have an advantageous yet skeptical probability for winning Political battlefields in the heart of India. All in all, with the instances at hand, it is no exaggeration to expect a tug of war between the traditional rivals. However, with the war yet to start, more grounds are still to be covered, which might show drastic shifts or curves in the otherwise surging curve of BJP in Madhya Pradesh.