Madhya Pradesh Elections: Why BJP and Amit Shah should be worried? 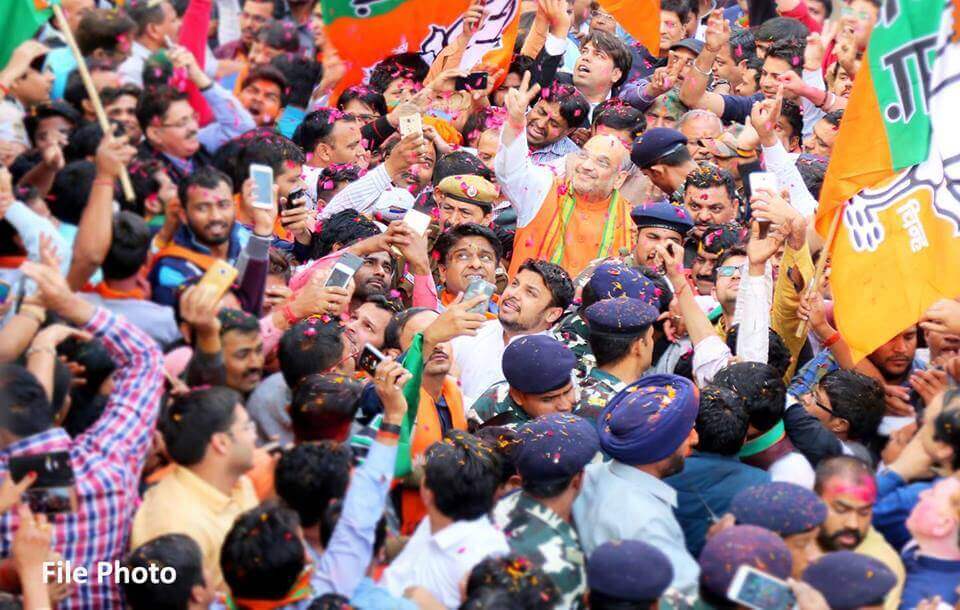 Assembly elections are set to take place in Madhya Pradesh in November-December next year. 2013 assembly elections saw BJP and Shivraj Singh get a convincing victory over INC. However, this year it won’t be an easy task. Though BJP came up with a massive victory in the local bodies elections, party insiders were said to be concerned because the tally came down to 25 from 28 last time, while Congress increased their tallies to 13, while last time they won only 8 seats. After the convincing victory in UP elections, BJP wants to swoop the elections in MP by setting a target of 200 seats. But what are the challenges faced by BJP and Amit Shah in the upcoming elections? How will Congress counter attack BJP’s strategies? Will BJP complete its 200 seat target?

Madhya Pradesh BJP President and Narendra Modi’s right hand Amit Shah officially paid a three-day visit to Madhya Pradesh on 19th August. Shah knows that BJP is facing serious concerns in BJP and various challenges from other parties. Shah is likely to discuss civil elections poll results with the leaders of BJP and to prepare a strategy for the upcoming legislative elections. BJP is facing serious allegations of corruption from the Congress. Chouhan government has also been criticized by the Vyapam scam, which has led to many suspicious deaths in last few months. Also, poor conditions of the farmers in the state have already been a big issue for the MP government. The farmers held protests in June this year, but the agitations turned violent when 5 of the protesters were killed in police firing. Several BJP leaders believe this was a wakeup call for the party. Congress leader Kamal Nath said that the BJP government was responsible for the poor conditions of the farmers and that they are ready to throw away BJP government in the legislative assembly elections. Also, civic body elections were an alarm bell for the BJP. It showed the inability of Shivraj to handle the situation and the people’s resentment against the government.

What is Amit Shah’s strategy?

Amit Shah visits Madhya Pradesh when BJP is facing serious challenges. Shah knows the problems in the upcoming elections and he fears that BJP will lose the significant number of seats if something is not done to change the conditions of the state. For this, Shah believes that one way to increase BJP’s vote base is by wooing the grassroots workers, Dalits as well as other communities. Shah, in his three-day visit to the state, will have the meeting with the core members of the BJP. He will meet the local leaders as well as senior leaders and will discuss various problems. Amit Shah also went to the house of a tribal BJP worker, Kamal Singh Uke and had lunch at his house, which had no toilet. This step of Amit Shah was to reach the socially out-stressed classes. Uke claims that he has been asking the government to get a toilet at his house but nothing has worked for the past six months. The opposition took advantage of this issue and blamed the government for the inconvenience of the poor people like Uke. Shah has been going after the Dalits and other tribes because 82 out of 230 assembly seats are reserved for the scheduled castes/scheduled tribes. Shah also arranged Simhast Kumbh Festival in the state last year to reach the Dalits. He himself attended the festival. He also had lunch with the Dalit saints.

Another benefit for BJP will be anti-incumbency in the state, which BJP has managed to win for the past few years. Also, disarray in the Congress party, where few of the party workers provide cross information to the BJP has been a great help for BJP. There are reports of several party leaders not happy with the CM Shivraj Chouhan. However, BJP was quick to dismiss the claims and assured that the upcoming elections will be fought under the leadership of Shivraj Chouhan.

How can Congress challenge BJP in Madhya Pradesh?

Meanwhile, Congress had an improved performance in the civic body elections. This will help boost their confidence. Also, BJP government in the state is self-injured. Shivraj Chouhan is under severe pressure. But if Congress wants to stand a chance, it can work on various factors such as social engineering. Congress should make a face as future CM, most probably, Jyotiraditya Scindia. Congress should pressure the current CM for the Vyapam scam, illegal mining of sand on the banks of river Narmada, and Wheat scam and also for not imposing the ban on liquor. Farmers are totally not in favor of BJP government and have been protesting for a long time. Congress should do everything it takes to raise this issue and make it a liability for the BJP. Also, Congress must also raise the issue of the debt faced by the Madhya Pradesh government. Currently, Madhya Pradesh government is facing a debt of Rs 1 Lakh Crore.  All these issues will help Congress in dethroning the BJP government.

So, until now it seems that BJP, who has been in power since 2013, will focus on gaining votes of the Dalits and other tribes. This will help them win the 82 seats which are reserved for the Dalits. However, their target of 200 seats seems a bit too ambitious as BJP is facing severe challenges in the state. Their win seems imminent but the results will not be as good as the last time and BJP will have some loss in the seats.