Will BJP survive a united opposition in Lok Sabha Elections 2019? 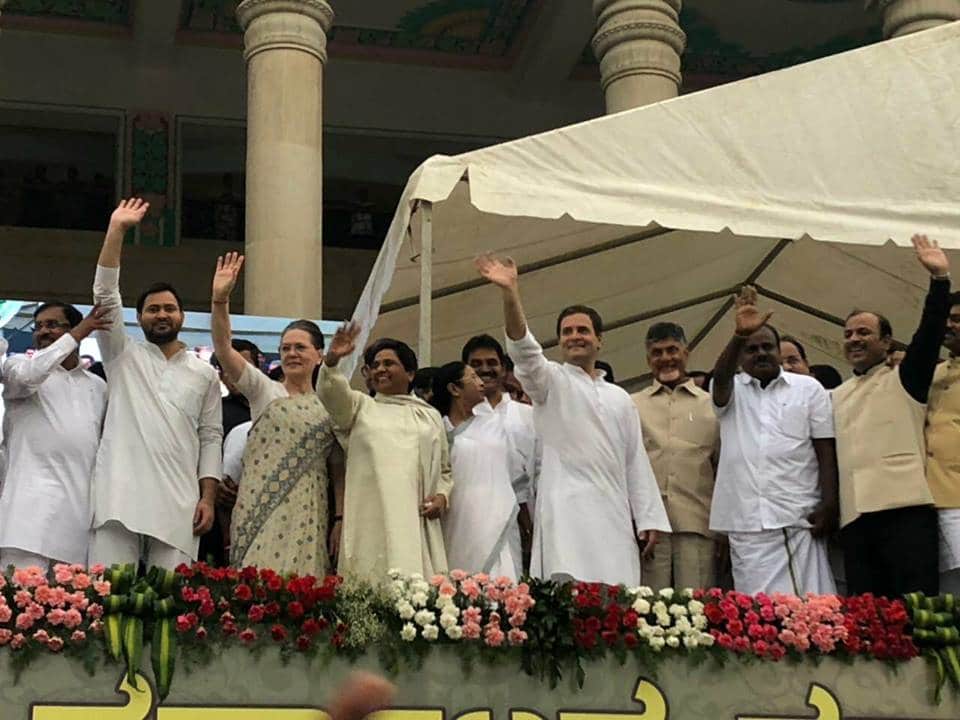 Today BJP rules 21 states, either directly or with its allies, painting the country with its saffron beauty. It has a countrywide presence. BJP’s victory in the general election of 2014 was due to many factors including Prime Minister Narendra Modi’s charismatic appeal and a well-oiled electoral machinery starting from booth level. BJP has won 12 new states in the past four year conquering new frontiers like Jammu and Kashmir, Assam, and Tripura. But the question is ” Can BJP keep this victory intact in Lok Sabha Elections 2019″?

No party has ever won so many seats with such low vote share, except in 1967 where Congress won 283 seats that is 40.8% of total valid votes polled. A series of by-polls’ losses and disenchanted NDA allies makes the BJP seem suddenly look vulnerable in the run-up to Lok Sabha Elections 2019. Read out, Can BJP Win The General Elections 2019?

The defeat of the BJP candidates in the three Lok Sabha by-polls this month in the two Hindi heartland states of Uttar Pradesh and Bihar sending 120 MPs to the House of People has readied the ground for efforts for the unity of the anti-Modi opposition. This has brought down BJP’s strength from 282 to 273 seats. The most symbolic defeat came from UP where the drama was heightened by the fact that BJP hadn’t lost Gorakhpur since 1989, it happened because SP and BSP teamed up to trounce BJP in the by-poll of Gorakhpur and Phulpur. For more detailed analysis ,read What effect might UP bypolls have on Loksabha elections 2019?  Now it is not just the Congress that feels threatened by the expanding power of BJP but several others regional forces such as SP, BSP, and RJD which are facing the crisis of existence.

During Karnataka election CPI (M) admitted that Opposition parties are woefully divided to put up a serious challenge to Modi. The desperate need by opposition to stay in power has led to the formation of inorganic alliances between bitter rivals.

According to CPI (M), the formula for taking on Modi is state-wise unity. It cites the example of SP-BSP tie-ups in Gorakhpur and Phulpur as a model to beat the BJP. The exact shape and depth of the anti-BJP front is yet to materialize concretely but it is clear now that the Modi-Shah fort is no more impregnable and can be demolished.

If we look at the statistics of vote share percentage of 2014 general election, the combined vote share of BJP and Congress was just over 50% which means half the votes went to some other party. If we look at the combined vote share of two major alliances, the NDA had 38.5% and UPA had just under 23%, therefore coming together of UPA and others can halt Modi juggernaut in Lok Sabha Elections 2019. Congress has already indicated the JD-S-Congress alliance in Karnataka would pave the way for larger opposition unity ahead of the Lok Sabha Elections 2019. With every passing day, it is becoming tougher for the NDA to counter the rising popularity of jailed RJD leader and former chief minister Lalu Prasad in Bihar. The RJD led alliance is going to create a high degree of opposition unity that is likely to make the NDA task of repeating the 2014 electoral performance difficult, if not impossible. Sharad Pawar, supreme member of Nationalist Congress Party (NCP) also convened a meeting of the opposition parties in Delhi on 27-28 March to discuss the roadmap of the opposition front to take on the BJP in the Lok Sabha Elections 2019.

The definite battle, however, is in those 100 seats lying in the states of Rajasthan, Gujarat, Madhya Pradesh, and Uttrakhand where the BJP and Congress will be in direct contest. In 2014 BJP won 97 of those seats but the current trend shows something different in the past two years Congress has won all Lok Sabha and assembly by-polls in these two states. A united opposition and improvement of Congress in these three big states will ensure that BJP doesn’t cross 200. In the evolving process of the unity of the opposition, several parallel attempts are currently underway. On 12 March, 20 like-minded parties attended a dinner hosted by UPA chairperson Sonia Gandhi where the discussion veered around on ways and means to coordinate efforts to oppose the BJP-led NDA government of Prime Minister Narendra Modi in the Parliament and outside.

The existential crisis may have brought the opposition together but there’s no consensus on who will lead such front if it all takes shape. Regional leaders, meanwhile, are also making their moves to float the idea of a non-BJP and non-Congress front. Mamata Banerjee has shown Congress president Rahul Gandhi that there can be an alternative opposition to Modi except for Congress. She has already met and reached out to leaders of divergent political groups and also the first to extend support Delhi Chief Minister Arvind Kejriwal during the recent AAP MLA disqualification row. She is a multi-term Cabinet minister and has a thumping majority in West Bengal, she is also ready to take her chances with bickering BJP allies. Several Congressperson has denied Mamta -Rahul rift and declared it as the imagination of the media.

According to a party insider, the goal for Congress president Rahul Gandhi is not to win but to remove Modi from power in Lok Sabha ELections 2019. It is more than obvious that both leaders are still weighing the pros and cons of such a front and the moves are exploratory in nature as the political class waits to read and decipher the public mind before taking a plunge.

Politics is much more than just arithmetic there is a need for chemistry and there is no leader right now to hold the opposition flock together. RJD-JD (U) – Congress grand alliance managed to keep BJP at bay during Bihar election last year but the SP-CONGRESS combined failed to do the same magic last year in UP election. Elections are not just about addition and subtraction, let’s not forget about the verdict of Ram Janam Bhoomi is still pending which can change the course of the election. Long before opposition raised the idea of a united front, BJP had already realized that it will not be able to repeat its victory in Lok Sabha Elections 2019. In the ongoing game of political chess, Modi-Shah combine has many cards up their sleeves that have the potential of derailing the unity efforts. The Prime Minister may decide to force an early general election along with the elections of MP, Rajasthan, Chhattisgarh, and Mizoram, thus catching his opponents on a wrong foot. In that case, too, the dynamics of the opposition unity is going to be different. Amit Shah has over the past four years is focusing on forming new alliances. BJP can only win in Lok Sabha Elections 2019 if it increases its vote share by 50% in those constituencies where there is a strong opposition alliance. That’s a huge task but not impossible and politics is changing every day. Meanwhile participate in our 2019 opinion poll : Which party you will vote in 2019 Elections?