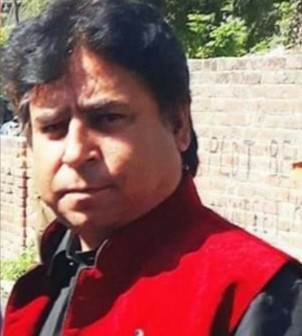 Kashmiri Pandit Sarpanch , Ajay Pandita was gunned down and murdered on 6th June , 2020. This incident took place in South Kashmir’s Anantnag District( Lokbawan village) at 6.p.m in the evening. Jammu and Kashmir police chief, Dilbag Singh said it was a ‘targeted killing’ for being a part of the democratic working member in the minority Hindu community . Panic and wrath rose among panchayat leaders, especially the ones belonging to the minority Hindu Community after hearing about the incident. The Panchayat members after the terrorist killing of a Sarpanch were left shocked. It has triggered exodus of the Kashmiri Pandit local body leaders in the Valley.

Kashmiri Pandit’s  originally lived in the Kashmir Valley before Muslim influence entered the region after which large numbers converted to Islam. They are the only remaining Kashmiri Hindu community native to Kashmir.

Kashmiri Pandit’s, a Hindu minority living in the region of Kashmir were forced to leave from the early 1990 onwards due to threats from Islamic radicals and militants. The overnight exodus on 19th January became a humanitarian tragedy where slacks of Pandits lost their homes, jobs and land and were forced to live in refugee camps in their own country without any proper facility.

From 1987-1990, anyone showing pro- Indian ideals were killed and Kashmiri Pandits were targeted. Pandit Tika LAL Taploo(14th September 1989), Pandit Nilkanath Ganjoo(2nd October 1989), PremNath Bhat(27th December 1989) was shot dead. In December 1989, Five terrorists were released by Government to save Home Minister Sayeed’s daughter. There were many barbaric killings after releasing them. These were some major incidents that shook the Kashmiri Pandits.

Hizbul Mujahideen released a press release on 4th January 1990 in Urdu asking the Pandits to leave for their own well being. They openly threatened Pandits with Ak-47 Gun marches ,bombing, sporadic firing and militants circulating hit lists which led them panic stricken.

19th January 1990 was a night of terror as supremacy of Islam was established asking people Pandits to leave. On 20th January the first group of Pandits fled with whatever things they could grab. The second lot left in March and April after more Pandits were killed. About 1-2 lakh fled and many women were raped ,murdered and kidnapped. About 700-800 people were killed from 1989-2004.

Most Pandits fled to Jammu where they lived in refugee camps despite being educated and rich. Others, left for cities like Delhi .A few hundred Kashmiri Hindus lives in the Valley now.. Over 3.5 lakh Kashmiri Pandits were forced to leave the Valley by the Jihadi separatists and terrorists between 1989 and 1992.

Earlier in February, some prominent Kashmiri Pandits in New Delhi met Union Home Minister Amit Shah and raised the issue of honourable and dignified rehabilitation of the displaced Hindu community. The home minister had assured them that the Modi government was committed to rehabilitation of the community. But the killing of a Kashmiri Pandit Sarpanch by terrorists in the Valley has come as a major setback to the efforts of the government to rehabilitate the displaced Hindu community

After the scraping of Article 370 in 6 August 2019,  the valley  had become risky for the lives of the  elected representatives. After repeatedly briefing the central government ,with the everyday problems faced by the representatives, there was no security cover given for their protection. Rather, they were put in a difficult position.Themainstream parties lost the relevance they had after BJP came and thisshifted to the Panchayat heads. With programmes like Back to Village, the government had been using elected panchayat representatives to revive the politics by directly reaching to the grassroots and establishing Panchayati Raj in Jammu and Kashmir . As soon as that started, militant threats and hostility began.The Kashmiri Pandits had to explain the policies in Kashmir to the rest of India and the world. The hostilities have hardened between the two communities since then.

In November 2019, a Sarpanch and a government officer were killed in Anantnag during an ongoing Back to Village (B2V2) programme. In the past as well, the killing of Panchayat representatives has triggered a series of resignations. In September 2019, Amit Shah promised protection to these Pandits but they never received it. Pandits get elected and they get killed. They cannot say they’re safe even if the government says everything is good at the ground level. Ajay had said so in a meeting earlier. The Pandits have been asking for security , accommodation and timely honorarium for the past year. But this, hasn’t been heard. Many Pandit’s fled in 26 hotels in Srinagar upon receivingthreats.

This episode has triggered fear among Kashmiri Pandits to whom the killing is reminiscent of the 90s. “In the 90s, it started with a political killing of Tika Lal Taploo and then the world knows what happened. I .There has been a massive outrage on social media after the killing. From Kashmiri Pandit youth to those who witnessed the insurgency in the 90s, everyone is questioning how safe a Pandit is in Kashmir.

Ajay Pandita, Sarpanch from Anantnag, was killed today by terrorists. The killings and subjugation of Kashmiri Pandits has not stopped in Kashmir.

Many a time terrorists have threatened to “cleanse” the Valley. This is that cleansing. And it continues. pic.twitter.com/q3pHbK9iw1

Some Panchayat leaders have fled to Jammu. There are reports that sarpanchs, panchs and corporates belonging to the minority Hindu community are leaving the Kashmir Valley. A village Sarpanch in the Pulwama district of the Union Territory said Hindu panchayat leaders have started fleeing the area. They said they wouldn’t go back to the Valley unless requisite security is provided.

Many Kashmiri Muslims have apologised for the incident in public platforms anddirecting it as a political killing rather than a communal one. Yet, this has shaken all the existing fears of the Hindu’s as a minority in Kashmir.