Why JDS is the real king maker in Karnataka Polls 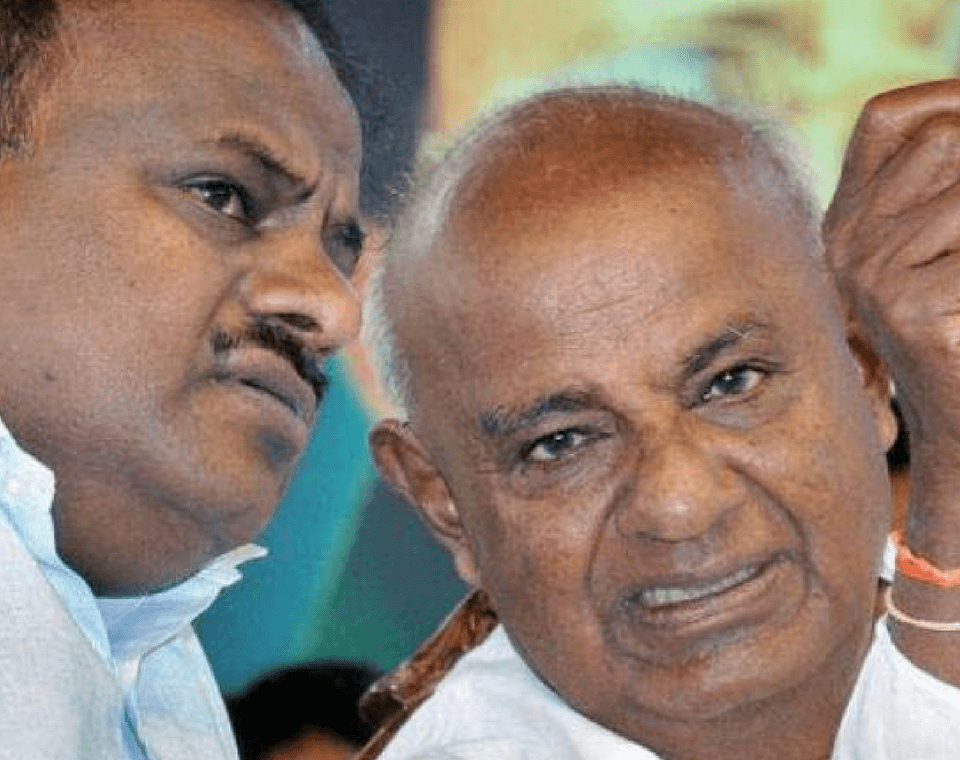 Recently released pre-poll survey outlines a hung assembly in Karnataka. All the three political parties run short to the clear majority (113 seats of 224 constituencies). The Lokniti-CSDS-ABP survey projects INC as the majority party with 92-102 seats. BJP is likely to win 79-89 seats. And JDS is about to act as a king-maker with 34-42 seats. The survey predicts 38% of vote share to INC, 33% to BJP and 22% to JDS. Read more to know why JDS is the real king maker in Karnataka Polls.

From Kingship to Kingmaker: Devolution of Janta Dal

In Karnataka, Indian National Congress (INC) continued to be the undisputed ruling party till 1983. Later on, the Janata Party (precursor of Janata Dal) emerged as the alternative. And the state started to switch over its rulers in every 5 years. In 1983, Janata party won the election as the single largest party. The first non-Congress government was formed under the leadership of Ramakrishna Hegde.

In 1985, Janata party cleared the majority and reigned as a single-party government. But the bitter relationship between H D Deve Gowda and Ramakrishna Hegde weakened the party. As a result, they lost to Congress in 1989.
Meanwhile, the Janata party merged with Lok Dal, Indian National Congress (Jagjivan) and Jan Morcha and renewed as Janata Dal in 1988. This party won the election of 1994 with the merge of Hegde-Gowda factions. Deve Gowda became the chief minister. The unexpected prime ministership to Deve Gowda and some concerning events brought the two leaders again in bad taste. Ramakrishna Hegde expelled from the party.

Read More – Can Congress Make A Comeback In 2019 Election Drawing From Its Past Experience?

A split was brokered by J H Patel (He was the Chief Minister after Deve Gowda resigned) in Janata Dal. J H Patel along with his followers offered support to BJP in the assembly election of 1999. The party was cracked into Janata Dal (Sharad Yadav) and Janata Dal Secular (JDS) under Deve Gowda. The faction under Sharad Yadav merged with Lok Shakthi Party and Samta Party and formed Janata Dal United (JDU) in 2003. The devolution of Janata Dal started from this split.

Degradation of Janta Dal to Kingmaker in Karnataka Polls –

The assembly election of 1999 exhibited the devolving nature of Janata Dal. INC gained power with 132 seats. The BJP-JDU alliance won 63 seats and JDS secured only 10 seats. From 1999 onwards, BJP appeared as the alternative to INC. JDS reduced to a supporting party.

In 2004, Karnataka witnessed a hung assembly. BJP emerged as the largest single party followed by INC. JDS played the role of a king-maker. They supported INC and formed a coalition government. However, the act of support was short-lived. JDS performed a unique double betrayal. Deve Gowda favoured his son H D Kumaraswamy over K Siddaramaiah, who was supposed to be Gowda’s successor. Siddaramaiah quit the party and joined INC. Kumaraswamy along with 46 MLAs shifted his allegiance to BJP. The new alliance formed a government, making Kumaraswamy as the Chief minister. He was agreed to relinquish his office to B S Yeddyurappa of BJP after a period of time. But he disrespected his promise. As the consequence, BJP withdrew their support and the government collapsed.

In 2008, the first BJP government came into power in Karnataka, as well as in south India. JDS shrunk to 28 seats. Alternatively INC regained power in 2013. Siddaramaiah selected as the Chief Minister. Though JDS improved their place with 40 seats, they struck to inactive in the political structure.

These chain of events brought JDS into a peril situation. Their journey from kingship to kingmaker to a mere supporting party is alarming.

Why Janta Dal is the real kingmaker in Karnataka Polls?

The upcoming general election in Karnataka is peculiar in its traits. The political parties are pursuing a vibrant campaign. The technologically backed war room arrangement heads cyber campaigning through social media. The parties are keen to strengthen their structure by booth level mobilization. Rallies, road shows, and public meetings are carrying out without compromise. Volatile issues like caste, regionalism, existentialism, and Hindutva are overwintering.

Developmental topics, pro-government and anti-government aspirations are also taking them
minimal scope in campaigning. BJP and INC acclaim as the stronger players with equal potentialities. Political analysts are expecting a neck to neck competition and a hung assembly. If that happens, then JDS would be the anchor in muddling water. JDS is the strongest party in the state with a considerable share of votes. It is accounted for 20.2% of votes in 2013, 19.44% in 2008 and 20.2% in 2004. The data implies that JDS has a consistent number of supporters.

JDS role as a king-maker can be analysed in two ways;

JDS vote banks are overlapping with BJP and INC. Their potential to split votes creates concerns in both camps. Rahul Gandhi’s criticism; JDS as the B team of BJP and the Modi’s reverse claim; about the secret alliance of INC-JDS evolved from this distressed situation. The continuing attack on JDS by Congress is not to divide Minority-Dalit-OBC votes. The grouping comprises the largest proportion of the population in the state. BJP plays their cards as well. Their swings in the appeasement vs criticism are enough to make distractions in INC strongholds.

JDS is the key force in south Karnataka. It is a secular party which follows the equidistant approach in its norms. Recently released their election manifesto exhibits secular approach and development
strategies.

The state has 70 lakh new voters, whose voting behaviour are not yet addressed. Independent voters and young voters could be influenced by JDS election manifesto. Dalits, who are 17% of the population favours both JDS and INC. JDS alliance with BSP has the potential to drift more Dalit votes into their pockets.

Muslims usually support JDS in Karnataka. But the recent apprehensions about BJP-JDS alliance might urge them to vote for INC. 12.91% of Muslim voters are significant in 20 odd urban seats. JDS pre-poll alliance with NCP shall have some impacts.
JDS is optimistic in Vokkalinga community, the traditional support base of Deve Gowda. This community shares 8-15% of the population. The split in Vokkalinga votes between BJP and JDS is expectable.

The real kingmaker of post-poll of Karnataka elections –

The comments made by Kumaraswamy, while releasing JDS election manifesto evidently direct to their post-poll strategy. They are ready to collaborate with any party, who will carry out their manifesto. JDS is often considered to be opportunistic, though they are upholding secular values. BJP and INC hold equal chances to meet JDS support. But it seems that BJP has an upper hand.

There are doubts about an informal pre-poll alliance between BJP and JDS. BJP fielded weak candidates in the old Mysuru region where JDS is strong. It can be considered as a deliberate move from BJP to avoid splitting of the votes. JDS could be fascinated by the appeasement policy of BJP and an alliance with a party in power might attract short-term benefits.

An INC-JDS alliance is also possible under these circumstances. Mayawati and BSP will not be appeased with an alliance with BJP. JDS secular attributes act as a hindrance to collaborate because of BJP’s anti-secular ascribed characteristics. The spectra of Dalit-Minority-OBC prefer an INC- JDS alliance. It is difficult to neglect the aspirations of JDS traditional supporters. The increased discussions over regionalism and identity politics might bring INC and JDS together. Being the champion of Kannada pride, Siddaramaiah hopes a win-win situation over Hindutva and
Nationalism.

Alternatively, the cold relation between Siddaramaiah and the Deve Gowda – Kumaraswamy duo creates much weightage. JDS prefers to work with Narendra Modi than Siddaramaiah. But the waves of politics are unpredictable.

Also, Don’t forget to participate in our opinion poll and let us know who do you think will win the Karnataka Elections 2018