Why is Congress losing its ground in India? 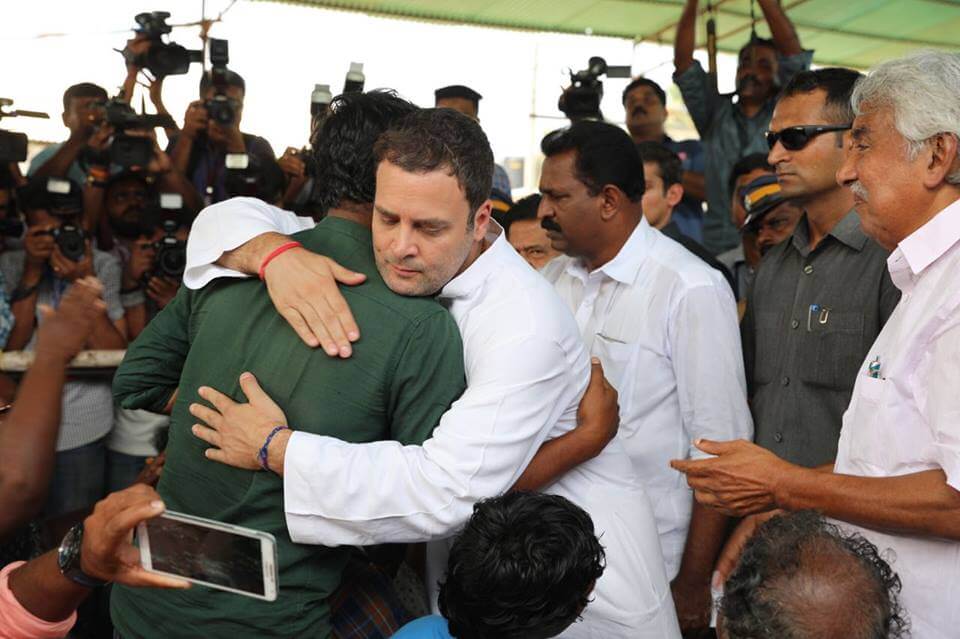 Being the first party of the Indian subcontinent, Indian National Congress always played a major role in this country from being a mediator between the crown and subjects to becoming a freedom fighter’s party till governing the nation for past 70 years (64years of Government rule). Although the impact of Congress has been decreasing from the past few electoral years from being single majority party to not even getting one-third seats in 2014 Lok Sabha elections. So let us look at the major reasons to know why is Congress losing its ground in India?

Congress had continuously ruled independent India till 1978 (the after effect of emergency). But then the Indian politics saw some major turmoil in the form of coalition government, then too congress had a major role in government making. But Indian politics saw a major turn over in 2014 Lok-sabha elections where congress got 44 seats out of 545 seats. One of the major reason for this debacle was that it had no prominent face for PM candidate. Congress had some immensely popular figures in the past like Jawahar Lal Nehru (because of the popularity from freedom struggle) and then Lal Bahadur Shastri (with his popular slogans like – Jai Jawan Jai Kisan the victory against pakistan 1965 war) then Indira Gandhi (with her firm decisions like removing of privy purse & huge victory of 1971 war) & lastly Rajiv Gandhi ( with his computer programmes). But the 2014 congress had no clear vision. Also the leadership of Rahul Gandhi was weak & the opposition had a charismatic face of Narendra Modi. The congress party’s leader Sonia Gandhi was accused of controlling the decision of former PM Manmohan Singh which diminished the image of a democratic party. Because Congress had no prominent face in 2014, congress started losing its ground in India.

The unveiling of numbers of scams of congress party like – *The Bofors scam – It was unveiled in 1987, when a Swedish radio alleged Bofors of paying $ 1.4 billion as bribe to Indian & Swedish governing officials including the former Indian prime minister Rajiv Gandhi, to secure an arms deal of sale of 410 field howitzer (155mm) guns, and a supply contract almost twice that amount. It was the biggest arms deal ever in Sweden, and money marked for development projects was diverted to secure this contract at any cost. The investigations revealed flouting of rules and bypassing of institutions. The scam was revealed by an investigating officer of Sweden & it was followed by the investigative journalist Chitra Subramaniam of ‘The hindu’. Due to the revelation of the scam the Gandhi lost his power in 1989 elections. The case continued till 2013 under different governments but went all in vain & was closed with lack of evidence & eventual deaths of culprits. Here is the list of scams which happened between 2009-2014, that Congress losing its ground in India completely.

Coalgate, as it was popularly known snowballed into a huge political scandal which pulled top leaders and bureaucrats from the previous UPA regime into the probe. A report by the Comptroller and Auditor General of India showed the inefficient and possibly illegal allocation of coal blocks between 2004 and 2009. It estimated the loss to the exchequer to the tune of Rs 10.7 lakh crore but it later toned this amount down to Rs 1.86 lakh crore in the final report.it had big industrial names like Naveen Jindal & Kumar Mangalam Birla. The case is still pending in Supreme Court.

2G Spectrum scam shook the country & was termed as world’s second largest biggest abuse of executive power by the time magazine. A report by the CAG of India revealed that 2G, or second-generation licenses for mobile networks, were given at throwaway prices instead of carrying free and fair auctions, to Swan telecom, Reliance, & Uninor, by the then Telecom Minister A Raja. According to the Comptroller and Auditor General of India, the scam has caused a notional loss of Rs 1.76 lakh crore to the Indian national exchequer. Recently the special CBI court acquitted as the prosecution failed to prove the charges.

It was one of the major Indian scams, involving a pilferage of around Rs 70,000 crore. It was estimated that only half of the allotted amount was spent on Indian sportspersons. The athletes were allegedly asked to shift to shabby apartments from the ones that were allotted to them by the authorities. Reports of the Central Vigilance Commission, in-charge of investigation of the CWG scam, revealed that Suresh Kalmadi, the Chairman of the organizing committee of the Games, offered a contract of Rs 141 crore to Swiss Timings for its timing equipment which was unnecessarily high by Rs 95 crore. The main accused Suresh Kalmadi & Abhay Chautala were arrested & later got bail, & in 2016 they were appointed as life presidents of the Indian Olympic Association.

There was number of other scams which were highlighted in the late 90s & early 2000. The worth of scams in past 70 years is Rs. 910,603,234,300,000, which is equal to USD 20.23 trillion .This became a major weak point of the Congress party, people could see the scams clearly & could see that many of the accused were acquitted without any action. The opposition didn’t lack in taking advantage of these scams & wisely played politics of propaganda and congress losing its ground.

3) Media agenda – made sure Congress losing in India

Media plays a crucial role in making & breaking one’s image & it played pretty well in uplifting the BJP agendas like news channels were divided between leftist & rightist by following the news & agenda of the respective ones and the election result showed that the pro-BJP played pretty well. Not only the mainstream news agencies but the social networking sites also were very active in forming propaganda. The opinion leaders on the social media had their own gameplay by creating memes & destroying one leader’s image to building one party’s status and congress losing so badly that it can’t recover even now.

One of the major drawbacks for Congress was that they didn’t have any solid promises to make like they had in past. Their manifesto was weak & with no new prominent agenda. Their image was scared due to the past allegation of scams & their only comeback against BJP was the Godhra Massacre allegation against Modi & BJP not being a secular party. But on the other hand BJP had some solid comebacks against Congress like the scams unveil, Rahul, being an amateur & promises like solving Ayodhya dispute ( building of ram temple) revoking article 370, starting bullet train, etc, where one side BJP had new & fresh topics & promises & the defamation & allegations on congress helped them.

The most prominent reason for Congress losing its ground was a strong emergence of an opposition party. Unlike in the past where it was congress versus other coalition parties, this time they had a prominent face of Narendra Modi. On one side people here not ready to accept Rahul as their prime minister & on the other side they were seeing Modi as a dynamic personality. Both the parties had renowned faces like Shashi Tharoor, Kapil Sibble, Digvijay Singh, Smriti Irani, Arun Jaitley, Rajnath Singh etc. but it turned out to be Modi versus Rahul. BJP became successful in making in turning the election as Modi vs Rahul than BJP vs Congress.

One should not underestimate the twist & turns of Indian politics. Congress can rise from 0 to the top in the 2019 elections. They are now more experienced & know the weak points of BJP. They just have to work on their strategies. Beside only attacking BJP, Congress should work on these strategies to making Congress losing to Congress winning –

1) India has achieved “near universal education” at the primary school level due to Right to Education and the dropout rates have also decreased. The outlay for education has been constantly increased.

2) Minimum support prices (MSP) for wheat and paddy has been doubled since 2004, while MSP for other grains has increased threefold. More than 650 lakh farmers were financed by the banking system during 2012-13.

3) The Food Security Act will entitle 35 kg of food-grains per month and other families for 5 kg per person at subsidized rates.

4) The Mahatma Gandhi National Rural Employment Guarantee Act (MGNREGA) is the largest welfare scheme of its kind in the world started in 2006. Wages given under the scheme per day have almost doubled from Rs.65 to Rs. 128 since the launch of the scheme. In 2012-13, the scheme provided employment to over 4.98 crore households,

5) The average GDP growth during the period of UPA government has been 7.7 percent despite two global slowdowns. Etc.

The loopholes of BJP government like – in Demonetisation where people faced inconvenience due to this unplanned move by Modi government & complicated tax bills (GST) can be highlighted. The pro-Hindu agendas can be unveiled by the mass lynching by ‘ gau rakshaks’(supported by BJP leaders) or ban on particular food habit (beef) & the scam of Vyapam (It a as scam of entrance examination, admission & recruitment that was unearthed in the Indian state of Madhya Pradesh in 2013. It involved politicians, senior and junior officials and businessmen systematically employing imposters to write papers, manipulate exam hall seating arrangements and supply forged answer sheets by bribing officials etc. ) under BJP leader Laxmikant Sharma & Jay Shah’s dramatic increase in business (where, Revenue from company owned by Amit Shah’s son jumped from just Rs 50,000 to over Rs 80,00,00,000 in a single year) etc .

It is not wrong to say that country is going through Modi wave but its not impossible to challenge one as proved in the latest Gujarat elections where the results were neck to neck. The waves can be changed just you have to play your cards right.