What will be the impact of Triple Talaq Bill in India? 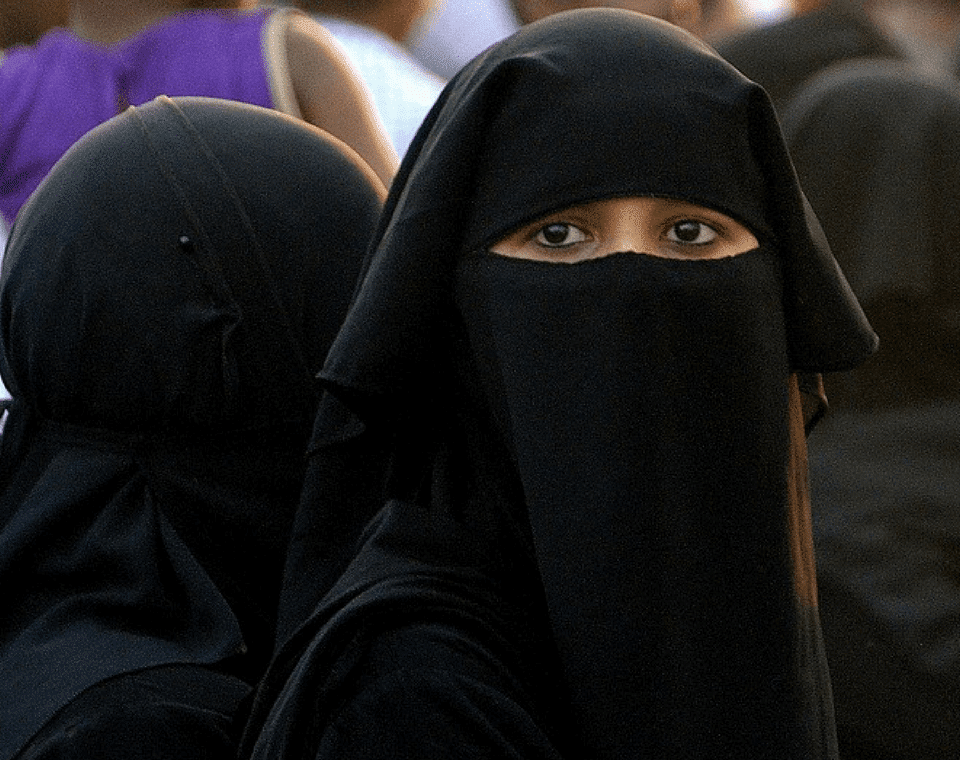 Last week the winter session of parliament ended with the triple talaq bill being shelved into a deadlock, in Rajya Sabha. The bill was introduced in Lok Sabha & was passed with majority, but the same bill could not be passed in Rajya Sabha . Interestingly, the arguemnts and their variance traversing the floor of the houses, the Lok Sabha (lower house) and the Rajya Sabha (upper house ) reflected the complexities involved, not just in the varied stances taken up by the parties, but also the complexities involved in the understanding and handling of the issue.Thus, to unfold the complex dynamics at play, let us examine the politics surrounding the most controversial -“Triple Talaq bill and its impact in India”.

What is Triple Talaq?

Holy Quran cites, “The most hated thing of all lawful/permissible things(Halaal) to Allah is Divorce”. Under Islam divorce is the last thing which Allah sought to consider. It classifies the system of divorce into three types, Talaq referred to the instances where husband want to free himself from the sacred bond, Khula used to describe divorce at the instant of wife, and Mubarat, where divorce is mutual. Talaq is a three step process which includes arbitrary settlement of divorce process with due respect to the concern of both wife and husband extended over a stipulated period of time. At the end of this period(referred to as iddat), after going through several circumstantial events and if the couple or rather more prominently husband still wishes to part from the marriage contract, then the husband gives the third and the final talaq with which the marriage ends and stands irrevocable. This is the essence of the Triple talaq as actually proposed or mentioned in the Holy Quran.

However, from age old patriarchal beliefs and opinions of the people, this practice of “Instant Triple talaq,” has been evolved.So by and far Instantaneous triple talaq or talaq -e-biddat without the consent or in absence of wife at the will of husband for whimsical reasons through SMS, WHATSAPP, MAILS, or orally are considered sinful under Islam. Though sinful, these were deep rooted among Sunni sect of Hannafi school Muslims from over 1400 years and apparently validated the grounds of personal law. Ironically, as Sunni Muslim population ranges to about to 12 crores out of 17 crore Muslim population in India, the practice of Instataneous Triple talaq has been deeply rooted and followed as a custom or practice.

Should triple talaq be abolished?

Traces of Triple talaq can be found perpetuating since long, but in India genesis of  contestations against triple talaq cases dates back to 1932 in Indian judiciary from Anisa Khatun’s case . From then, numerous cases were filed and different courts held different views. Finally after a great struggle, with the advent of Shayara bano’s PIL with 5 other women,

The supreme Supreme Court bench of five after going through a 397 paged ruling, declared triple talaq as unconstitutional with 3:2 majority. Interestingly the Chief Justice differed from the majority-held iews of the bench.A study of 2011 censes reveals that for every divorced Muslim man there are 4  divorced Muslim women, which depicts the backwardness and discrimination against Muslim women. 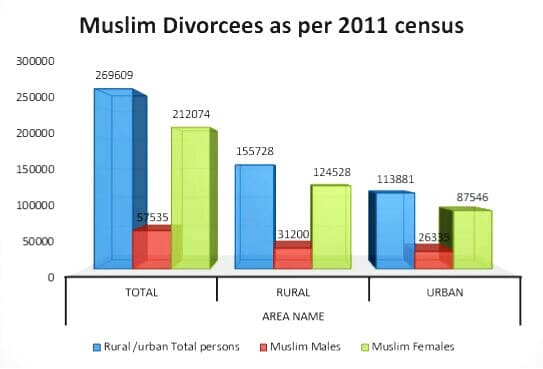 In March 2017, a petition was filed by Muslim Rashtriya Manch, an islamic, organisation affiliated to the right wing Hindu nationalist RSS, to end this unjust divorce practice with over 1 million Indian Muslims signing , of which majority were women,  though the sample e for this exercise remains a site of contention. Finally, on 22nd August, 2017 the Supreme court deemed Instant triple talaq to be unconstitutional and interesting fact is that about 100 cases on instant triple talaq were brought into limelight after the verdict was out as on December 28,2017. 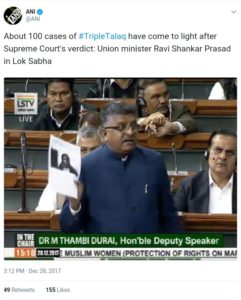 Given that Triple talaq was realized to be unjust & discrminatory against women, many countries including major muslim countries like Pakistan, Bangladesh, Turkey, Malaysia, Iran, Iraq, Jordan, UAE, Egypt, etc have already banned this unilateral form of divorce.

The banning of the triple talaq turned out to be so difficult & controversial in India due to two reasons, firstly, the muslim personal law (shariat ) application act 1937 ( Muslim Personal Law) was passed after government act 1935, in the colonial era. It made the shariat board as functional law board for muslim’s personal matters & prevents states interference. Secondly the article 25 of Indian constitution gives each the right to freely practice their religion, which empowers the personal board & exempts them from falling under uniform civil code . However article 14 is equally significant in balancing the act, making a good case for  judicial activism.

What is Triple Talaq Bill?

The supreme court has already declared this instant talaq, as unconstitutional on August 22 2017, (Shayara Bano versus Union of India case) and this bill is considered to be a further step to concretize the historical verdict of supreme court by making it a punishable offence. It makes the pronouncement of talaq-e-biddat “void and illegal.” According to clause 3 of the Bill, “Any pronouncement of talaq by a person upon his wife, by words, either spoken or written or in electronic form or in any other manner whatsoever, shall be void and illegal.” A man who pronounces talaq to his wife shall be punishable with an imprisonement of three years and This Bill also makes the pronouncement of talaq-e-biddat a non-bailable offence. Also, the woman upon whom talaq is pronounced will have to receive an allowance from her husband, and she retains the custody of her children. And this is the most ambiguous part of the bill, upon which the government was questioned by the opposition in the Parliament.

“There are no official statistics specifically about triple talaq, but a survey, conducted by the Bhartiya Muslim Mahila Andolan, of 4,710 Muslim women from the economically weak strata of the community, found 525 women — 11.14% — were divorced. Of these women, as many as 408 — 78% — had been given unilateral divorce by their husbands.”

Union Law Minister Ravi Shankar Prasad said, ‘Law on Triple Talaq should be in the interest of the nation; This is not an issue of religion, it is a matter of equal rights for all’. Further joining the debate on triple talaq, BJP MP Meenakshi Lekhi says ‘there is a need to stop the practice of triple talaq to prevent its misuse and the bill aims to do that’. She further said that ‘there should be legal action against the Mullahs and Maulavis who oppose triple talaq as it was done when Sati was abolished’. “Codify Muslim Law so there is no confusion on what is right or wrong,” she says.

Why Congress is opposing the Triple Talaq Bill?

Looking through political prism, opposition alleged BJP of having a political agenda behind this bill . It was exclaimed that BJP is so keen to pass the bill because of the upcoming assembly in Chhattisgarh, Karnataka, Madhya Pradesh, Meghalaya, Mizoram, Nagaland, Rajasthan and Tripura. Also according to the opposition, BJP is setting agenda for the next 2019 general election to win muslim vote banks. Congress opposed the bill in Rajya Sabha, while accentuating the same points in Lok sabha,that if the husband is to be jailed, who will give monetary help to the wife ? Further as an add-on, they suggested that government should assist by creating a special fund to help the affected women. Salman Khurshid, a senior congress leader clarifies congress’s point, by saying ‘I don’t think we can support it because they didn’t made us understand how this criminality of Triple Talaq will benefit women. If someone is lodged in prison as a punishment for saying Triple Talaq, who will take care of his family’. Further speaking on triple talaq bill in Lok Sabha, Congress MP from Silchar, Sushmita Dev raised the issue of maintenance for women undergoing divorce process. She said, “the bill criminalises the triple talaq but if the husband goes to jail, who will give the maintenance?, Will the government create a corpus to provide maintenance to divorced women waiting for compensation?” With this allegations, they demanded sending the bill to the standing committee.

Read more: Why Supreme Court’s Ban On Triple Talaq Is A Victory For Women?

Speaking on the triple talaq bill, AIMIM president Asaduddin Owaisi said, “this bill violates fundamental rights and lacks legal coherence.” Owaisi, had earlier given a notice to oppose the introduction of Muslim Women (Protection of Rights on Marriage Bill) 2017 in Lok Sabha.

Speaking on the issue, BJD MP Bhartruhari Mahtab also said that “this bill is flawed, there are many internal contradictions in the Bill.” Also ‘The All India Muslim Personal Law Board’ (AIMPLB) has unanimously rejected the proposed instant triple talaq bill of the union government. Secretary of the board, Maulana Khalid Saifullah Rahmani from Hyderabad, said that the board has found the bill anti-women and will formally write to the Prime Minister to review it in consultation with the Board and senior clerks of the country. The AIMPLB secretary also claimed that ‘within the bill even a third person complaining against triple talaq instance with the police can ensure a case against the husband, even if the wife herself might not want a case to be taken up against her husband’.

What will be the impact of Triple Talaq Bill in India?

The triple talaq bill seems to have no cake walk as it had  in Lok Sabha. The bill which is made to ensure justice to the women, ridding them of the unilateral divorce, seems to be getting politicised both by government & opposition. One cannot deny the angle of vote bank politics so innately linked to this issue, however, it is also to be acknowledged, though the move so historical, but the bill has certain grave loopholes and puddles. The adage describing BJP’s ecstasy in passing the Tripe Talq Bill as a political strategy has been flavoured many times as “the party which is said to have minimal legislators in country’s populous state, which has inflammatory anti-Muslim legislators, and which, as said by many, had subjected to violence against Muslim cattle traders, is now fighting for Musli women’s equality? a bit skeptical, right ?” Whatever might be the political agenda, the fact that Triple talaq bill as a whole remains as a great success to the secular India pacing way for a uniform civil code free from patriarchal, orthodoxly and superstitious beliefs and practices.

However, no law, unless internalized within the society can work successfully, as is evident by the figures stalling high in cases like dowry-deaths, caste practices, for which laws and solutions were formulated, yet the desired result is far from materialising, and that is why precisely the directive principles of state policy,which envisages the option of uniform civil code,was kept non justiciable, but always as an option at hand, so that when the internal democratization within the society is ripe, those options can always be tapped into, for strengthening the fabric of Democracy in India, to which the triple talaq bill, though a small but historical step, is a welcome move towards gender justice in the country.