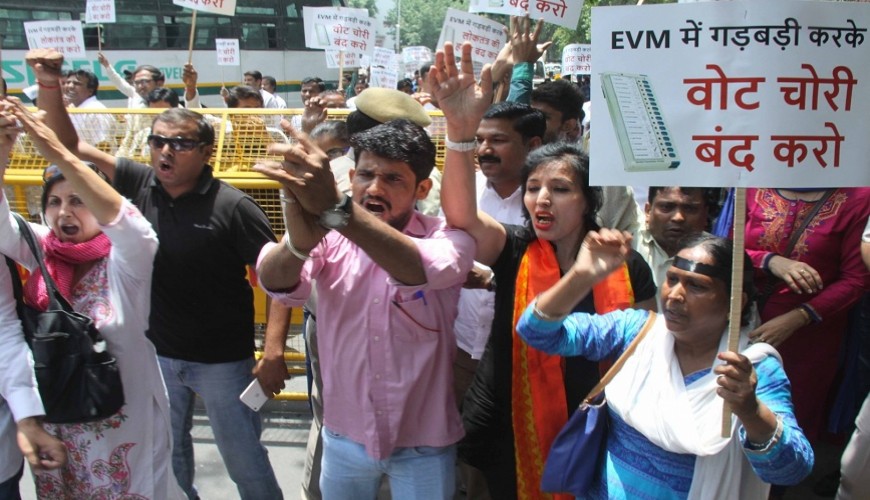 Now that 2019 elections are barely a few weeks, it’s time to revisit famous rhetoric heard in every election since 2014 (except in the last state elections of those 3 states). Can EVMs be hacked? Every party of the non-NDA bloc has stated that the EVMs are prone to hacking and tampering. 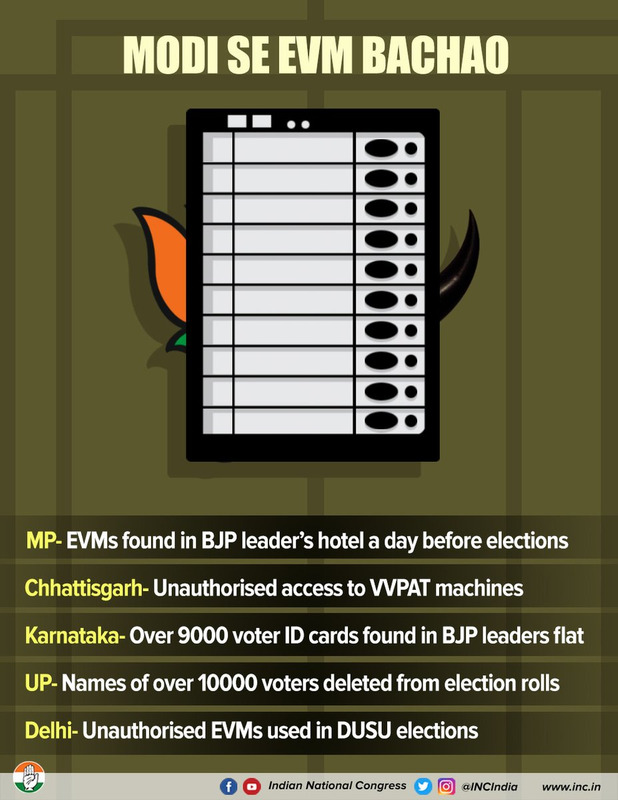 Although EC has stood by its claim that those accusations are false, even inviting members of several parties for demonstration, we still get to hear those accusations time and again. And while those accusations haven’t been corroborated with any conclusive proof, a new chapter has unfolded in this saga today. An expert in the US, Syed Shuja has claimed that EVMs can be tampered. He held a press conference regarding same.

So what did this expert’s claim lead to? Can EVMs really be hacked? How would it affect the 2019 elections?

At an event organized by Indian Journalists Association(IJA), London, the cyber expert through an online press conference, made serious accusations against the BJP and how the 2014 elections and every subsequent election has involved EVM tampering. He also claimed that he would demonstrate how to hack one.

Did he give a demonstration? No. Did he make the accusations against BJP, ones that have been floated in public domain since 2014? Yes.

The conference gave a bright hope to everyone watching that the EVM mystery might finally get a solution. However, it soon turned into a political gimmick, designed to add spice to the upcoming elections. He first claimed that EVMs can be hacked through a transmitter in the machine. Then he said that BJP and EC were aware and didn’t do anything about it. His claims were backed on the argument that he studied the pattern of 2014 and subsequent state elections. Continuing, he said that Reliance Jio’s network was used to hack the EVMs. Then he claimed that he and 12 other members of his team visited a BJP leader in Hyderabad where his team members were shot, killed while he survived and thus sought asylum in the US. He also linked Gauri Lankesh murder to investigations into EVMs’ hacking. One bold claim was that even if EVMs are done away with, BJP would use its money to influence the electorate. But the most outrageous claim was that the Brexit referendum was fixed too, due to EVM tampering!

Also Read -   What effect might UP bypolls have on Loksabha elections 2019 ?

While the claims are controversial and without any evidence, further investigations would be necessary to check its veracity. But, it still raises a few questions.

If BJP is indeed rigging election, how come it lost in Dehli, MP, Chhattisgarh, Punjab, and Rajasthan? Why was Kapil Sibbal, the Congress leader present in the conference? Why would the expert not move to Indian Courts and demonstrate in front of Indian judiciary and Media? Or why didn’t he demonstrate at all? Where have we heard that famous Reliance-BJP rhetoric before?

The event concluded with another round of accusations with the audience still waiting for a substantial proof. Let’s just end it there.

CAN EVMs BE HACKED?

The Election Commission today dismissed the claims made by a London-based hacker, who said he can hack the electronic voting machines used in India. The controversial, unsubstantiated claims of the hacker – made during a so-called hackathon this evening – comes amid a renewed focus on EVMs by the united opposition, which has formed a committee to spearhead the campaign for their removal and a return to ballot papers.

With every BJP win, the opposition has claimed that it was a result of EVM tampering. Through their baseless allegations, they have not only tarnished the reputation of the ECI but have also brought the quality of debate in Indian politics to a new low. So in the midst of this controversy renewing again, the need is to look at the facts once more.

In the recent past, an AAP MLA did a demonstration of EVM tampering. EC released a statement the same day and said, “The Election Commission, through media, has learnt about a so-called demonstration of tampering of ‘look-alike’ EVM. In this context, it should be understood that it is possible for anyone to make any electronic gadget which ‘looks-like’ ECI’s EVM and demonstrate any magic or tampering. Such has been the desperation of parties that EVM look-alike is used to peddle their agendas.

Throughout these years EC has denied that EVMs can be hacked, and rightly so. Whenever EC has been brought in a political debate, it has stood by its claim, defended the integrity of their institution and seek redressal of grievances of the concerned parties. It has gone as far as inviting all the parties to a meeting and demonstrating how EVMs are hack proof. Not just this, EC has also conclusively furbished claims of the candidate who cited ‘disappearance of votes’.

In 2017, its claims were backed by scientific proofs. Bombay High Court ordered investigations into EVM from Parvati Constitution, Pune by a forensic lab. According to the report received from the lab, the machine is a stand-alone, non-networked, one-time programmable unit, which is neither computer controlled externally nor could be connected internally or to any network. “Hence, it is opined that no evidence of tampering, altering or any other manipulation could be detected,” the report said.

In simple words, EVMs can’t be hacked due to a few reasons. Firstly, they are not connected to the internet. The order of parties assigned to the EVM buttons is different in several constituencies. Moreover, they are sent to the constituencies under the watchful eyes of various party representatives. In many recent elections, VVPATs were used that corroborated votes for different parties to the voter polled. Most importantly, they are always guarded by armed personnel, making it immune to the old practice of booth capturing and thus the most reliable way of elections in India.

In November 2018, SC dismissed a petition to do away with EVMs, putting an end to this debate. For 2 straight months! Now that this cyber expert’s claims too seem destined to meet the same fate as our political parties, one wonders what’s next in store.