What is the Strategy of BJP for Karnataka Assembly Election 2018?

For Bhartiya Janta Party victory in all three elections in North East is just the start. The year brings them the task of retaining their own forts.  Forts like Madhya Pradesh and Chhattisgarh will be a challenge to retain. For now, though, the whole of BJP is concentrating on reclaiming their old bastion- Karnataka. Karnataka goes to elections in April and May and both Congress and BJP are on the ground fighting each other. For BJP it will be a really big win and another step in their campaign. Let’s look at the strategy of BJP for Karnataka Assembly Election 2018.

For BJP, Karnataka is very important for multiple reasons. First, it is considered as the gateway to south Indian politics. With states like Tamil Nadu, Telangana and Andhra Pradesh going through political changes they see it as an opportunity. An opportunity to expand their footprint in the south, a feat they haven’t been able to do until now.

Secondly, Karnataka is also the last Congress held state in South. For BJP to defeat Congress in Karnataka will mean a step towards Congress Mukt Bharat. This will also mean that Congress will not have any state in south India. A region which was once there stronghold. Now they are only in Karnataka and need to keep it desperately.

Another reason BJP is flexing their muscle in Karnataka is to dismiss the claims of Congress of Karnataka Model vs. Gujarat Model. They have retained Gujarat in a narrow win previous year and now if Congress loses Karnataka then it would mean an end to this comparison. The victory thus means a lot more than just winning a state. It could become decider between development models.

A strategy that BJP president Amit Shah has implemented in every elections campaign is to mobilize the booth workers.BJP has increased their cadres all over the country in last few years and they look to take benefit of this. Amit Shah’s strategy comprises of making booth level committees. These committees are responsible for campaigning in the area of their booth. This time around they are looking to go door to door or hold small meetings, engaging the voters in the process. They are looking to have a worker on every 50 voters in a booth. Thus, ensuring face to face campaign rather than just rally based one. In Karnataka, they have formed such committees keeping in mind caste equation as well.

In addition, they are also looking to implement one plus one strategy. It means that every candidate will also pay attention to another constituency besides their own. This ensures that in every constituency BJP has a much larger presence.

BJP this time around is going to pick up the issue of law and order situation in Karnataka. The killing of their own workers has made it a sentiment issue for the cadre as well. In early February, also a BJP worker was stabbed to death over the political rivalry. The incident sparked of uproar from BJP and they protested on the streets. The incident was not the first of its kind. With 4 BJP workers already killed over political differences. The issue is set to be escalated in this election.

PM Modi too picked this issue up in his elections rally. He clearly sent a message to Congress that BJP will not let this issue go easily.

With the recent attack on Lokayukta in his office, BJP will attack the Congress even more. The attack which happened inside the office raises serious security concerns. FOr BJP it has come at the right time as they are looking to make this into a elections issue.

Karnataka has just won a case regarding the Cauvery water against TamilNadu. BJP is hoping that they can now exploit this sentiment and try to project a solution for Mahanadi waters as well. The Mahanadi dispute is between Goa and Karnataka. BJP is hoping that with the government in both the states they will be able to broker a deal, thus gaining the votes. They will try and blame the Siddaramaiah government for no solution and project themselves as someone who can.

The dispute is a long-standing one and with Karnataka facing drought-like situation it is has become an important issue.

Farmer Suicide as the main issue for Karnataka Assembly Election 2018 –

Another issue that BJP will target Siddaramaiah government will be the increasing number of farmer suicides. The number has increased substantially in last 3 years, with over 1000 deaths in last year itself. The schemes of government have failed to curb and the anger is growing in rural parts.BJP will try and take advantage of this sentiment in villages. This will help them in increasing their vote share in rural areas.

BJP in Gujrat elections observes that they lost rural voters and this time they are looking to get farmers on their side.

For BJP in Karnataka, the formula of LIBRA(Lingayat + Brahmin) worked in 2008. This time around they are also looking to expand this caste base. BS. Yeddyurappa hails from Lingayat community and thus enjoys the support of them. BJP has been traditionally supported by Brahmins in Karnataka as well. This time though they would have to woo Lingayat voters once again. Congress has tried to sway them by offering minority religion status to Lingayats, thus BJP has worked on their hands.

BJP on its part is looking to gain the vote of OBC community. They are trying to woo them by an image of PM Modi. This strategy has worked for them before and this time they are relying on it. 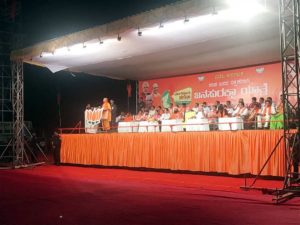 The x-factor from BJP could be the introduction of CM Yogi Adityanath in this campaign. BJP is trying to unite the Hindu vote in the state. They are using the Yogi Adityanath to polarize the Hindu votes and eliminate the caste equations in the process. CM Yogi Aditya Nath in his elections rallies has called Congress and its government rule Mughal rule. Directly implying that Congress plays appeasement politics in the state. It has been a strategy of BJP since 2014 elections to polarize Hindu votes.

The polarization helps BJP fight caste politics, in which they fail to get the support of different castes. The introduction of Yogi Adityanath worked for them even in Tripura, where they won recently. BJP now is looking to repeat that victory in Karnataka as well.