Rajya Sabha elections 2020 – Everything you should know

The Election Commission has announced that elections to 24 Rajya Sabha seats will take place on June 19, 2020. This includes 18 seats where the elections were deferred earlier due to the Covid-19 lockdown and the remaining six seats that will fall vacant in June and July. The elections, which were supposed to be held on March 26, this year will be conducted for six seats each from Andhra Pradesh and Gujarat, three each for Madhya Pradesh and Rajasthan and one each from Meghalaya and Manipur.

In February, the Election Commission had announced elections to 55 seats across 17 states. In March, 37 candidates were elected unopposed. However, the elections had to be postponed as the process required huge gatherings of officials, MLAs and agents of political parties. 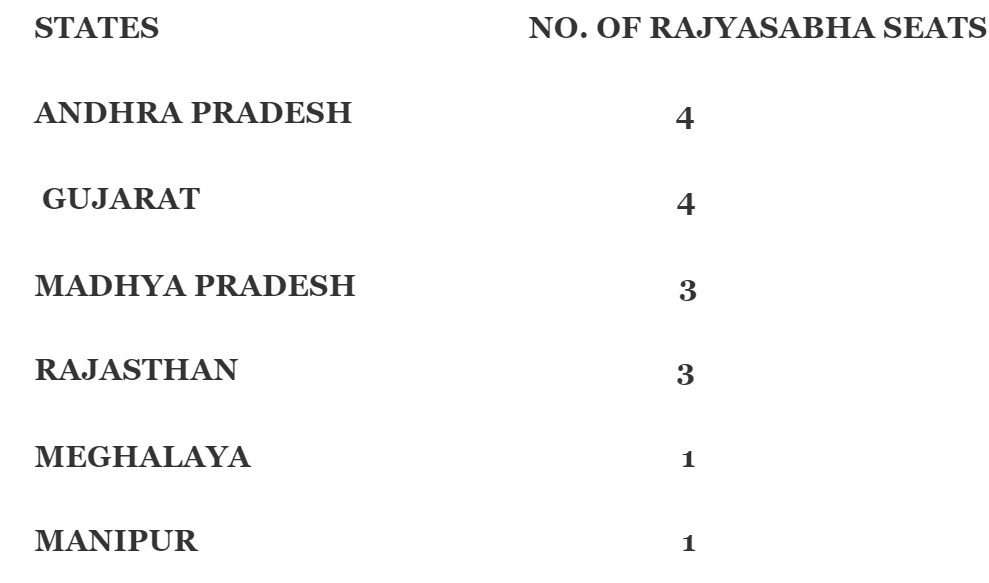 Andhra Pradesh has four vacant seats in the upper house caused by the retirement of K. Kesava Rao of Telangana Rashtriya Samiti Party (TRS), T. Subbarami Reddy and Mohammad Ali Khan of the Congress and Thota Sitarama Lakshmi of the Telugu Desam Party (TDP). Their terms ended on April 9. Five candidates will fray for these four seats. Four of them will be nominated by the ruling YuvajanaSramikaRythu Congress Party (YSRCP), which has 151 members in the 175 member assembly while the opposition TDP will host one candidate.

The YSRCP has fielded Pilli Subhash Chandra Bose and MopideviVenkataramana, both ministers in the Jaganmohan Reddy cabinet and industrialists AllaAyodhyarami Reddy and ParimalNathwani. Nathwani,a close associate of industrialist Mukesh Ambani, is a two-time Rajya Sabha member from Jharkhand. The TDP has also nominated its senior leader Varla Ramaiah.

Ruling party YSRCP is expected to win all four seats.

Gujarat, running for six Rajya Sabha seats has experienced a dramatic play as five Congress MLAs, in March, submitted their resignations from the party. It brought the votes for the opposition party to 68, four short of the 72 mark, that it needs to win against the ruling BJP.

On June 4, two more Congress MLAs, Akhay Patel and Jitu Choudhary handed over their resignations, leaving the party with merely 66 seats in the upper house.

The BJP, which is fielding Abhay Bhardwaj, Ramila Bara and Narhari Amin has the majority mark of 103 seats in the 182-member assembly.

Three Rajya Sabha seats in the state, currently held by Digvijay Singh of the opposition Congress and SatyanarayanJatiya and Prabhat Jha of the BJP are falling vacant.

Both BJP and Congress have decided to contest two out of three seats in the upper house that will go for elections on June 19.

Amid various roadblocks for all the contesting states, the deflection of ex-Congress supremo JyotiradityaScindia to BJP is an added worry for the opposition party in Madhya Pradesh.

However, BJP leader Balendu Shukla joined hands with Congress again, after leaving the party in 2009, amid conflicts with JyotiradityaScindia. This has given some hopes to the Congress to win the upper house election.

The winds have not been very favourable for the BJP too after Scindia’s admission due to outpour of criticisms against planning a political vendetta in the state.

Both the parties are confident of winning one seat each and the tussle remainsonly for one seat. BJP has recently claimed that it has the support of independent MLAs and candidates from Bahujan Samaj party (BSP) and Samajwadi Party (SP).

Independent MLAs are in the list for the Congress party too.

Scindia, for the BJP and Digvijay Singh for the Congress, are expected to win the seats easily. BJP’s Sumer Singh Solanki and Phool Singh Baraiya of the Congress are competing for the third seat.

The 200 member strong assembly of Rajasthan has 107 members of the ruling Congress party and 72 members of the BJP. Three out of ten Rajya Sabha seats will go to the polls on June 19.

Three RS members, Vijay Goel, Ram NarainDudi, Narayan Lal Panchariya, all from the opposition BJP have completed their terms in April. Presently, nine out of 10 seats in the upper house is held by the BJP. The Congress Party’s only MP in the upper house is the former PM, Dr. Manmohan Singh, who was elected unopposed in the house in the bypolls held last year.

The Congress has named K.C. Venugopal and Neeraj Dangi as the candidates while the BJP has named Rajendra Gehlot and Omkar Singh Lakhawat for the polls.

Earlier the victory of two seats for the Congress and one seat for the BJP was expected, but now with the nomination of Lakhawat by the BJP, the Congress is losing confidence of the win. The CM issued a statement on June 5,  accusing the BJP of trying to horse-trade Congress MLAs in the state. It is predicted that the victory of BJP in MP and in Gujarat is a fear factor for the ruling party.

The election to the lone upper house seat of Meghalaya is due to the resignation of WansukSyiem, whose term ended on April 12. The candidate of the ruling Meghalaya Democratic Alliance (MDA) is Dr. W.R. Kharlukhi, who is also the state president of the National People’s Party (NPP), a national level political party concentrated in Meghalaya founded by the former CM of the state, P.A. Sangma.

The opposition Congress has showcased former MLA of the party, Kennedy Khyriem.

The election to the lone Rajya Sabha seat in Manipur was held KshetrimayumBhabananda of the BJP, whose term ended in April this year. There are three nominees for the seat: BJP’s LeishembaSanajaoba, who is also the titular king of Manipur. TongbramMangibabu is nominated from the Congress and an another contestant from the Naga People’s Front (NPF), HonreikhuiKashang. The NPF is the partner of the ruling BJP led government.

The Rajya Sabha elections will take place on June 19, between 9 am to 4 pm. The counting of the final results will start from 5 pm onwards. The earlier date that was deferred due to the Covid-19 outbreak has further escalated tensions in some states. Some primary reasons are the accusations of the parties of horsetrading MLAs and also the complications arising on the states existing political struggle.