Rahul Gandhi at Berkley: Appreciable, but not fully honest 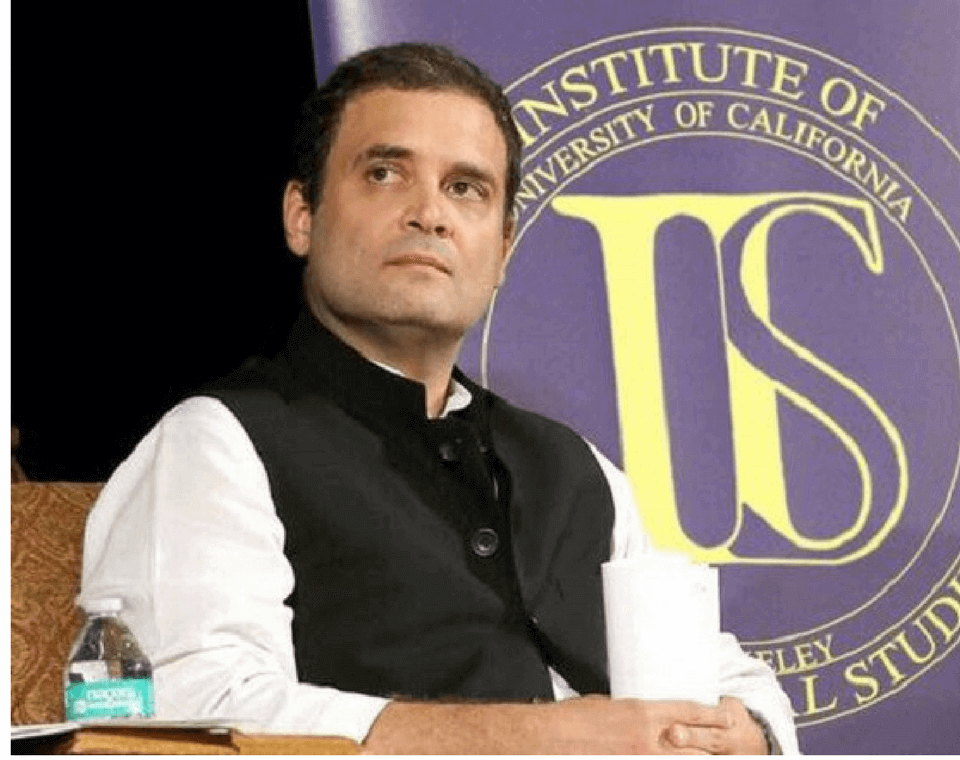 Congress vice-president Rahul Gandhi on 12th September addressed young students on ‘India at 70: Reflections on the path forward’ at the University of California, Berkeley. Gandhi, in his speech on ‘India at 70’, reflected on contemporary India and the path forward for the world’s largest democracy.  He is on a two-week visit to the US to interact with global thinkers, political leaders, and overseas Indians. Every time Rahul Gandhi arranges a speech or a press conference or any public speaking event, we pray that he won’t embarrass his political party as well as his family. But still, we wonder if this time it will be different. Many claim it will be Rahul 4.0 or 5.0, but still, we wonder is he good enough for the post of Vice President of INC. However, speech at the University of California, Berkley in USA was comparatively a mature speech; however, this is only partially true because not a single Rahul Gandhi speech is without him criticizing PM Modi, not even outside the country. This was another god-sent opportunity for the Gandhi scion. Growth rates had fallen in the previous two quarters, demonetisation didn’t pan out the way the prime minister had envisioned, retail inflation had risen to a five-month high in August and India hadn’t exactly been a paradise for free speech and liberty over the past few years. A decent platform at a supposedly liberal university (although the University of California, Berkeley is currently involved in a raging controversy over free speech), enough material to push the government into a corner, the fortunate timing — it just couldn’t have been better. And yet, Rahul being Rahul, he squandered it away only the way he could. Among the issues he spoke on were Modi’s pluses and minuses, where the UPA went wrong, the BJP’s “hate” politics, his willingness to take on the top job in the Congress, and the 1984 anti-Sikh riots where more than 3,000 Sikhs were massacred in displays of public anger over the assassination of Indira Gandhi by her two Sikh guards.

For the first time, Rahul Gandhi praised PM Narendra Modi on an open forum, saying that latter is a “much better communicator” than him who knows how to “give a message to three or four different groups” of people in a crowd. Rahul was honest in this matter and it was a bold step to praise their fierce rival, however the praise was short lived and soon he criticized Modi for being not a “good listener.” He also praised Modi for the ‘Make in India’ claiming it was a bold step taken by his government and that it created feasible amount of job opportunities for youth. However, he claimed that this benefited only large industries and that steps need to be taken for medium and small scale industries.

In the past, Rahul had always talked about giving opportunities to young people who do not belong to any political dynasty. He had a different view this time. He said dynasty politics is a part of Indian society, citing examples from political parties, film industry and businesses. He used the example of Abhishek Bachchan and Akhilesh Yadav. This was a good pre-emptive strike to deflect the dynasty question by being candid about its prevalence in India, but clearly the Rahul Gandhi of 2017 was less honest than what he was in 2014. Clearly, Rahul was more open about why he could not run away from dynasty in 2014 than now, when he simply dismissed it as inevitable in India. Nor did he take care to mention that two national parties – to the Left and Right of his own party – were substantially not run by dynasts.

Also Read -   All you need to know about Indira Canteens

There was a time when Rahul would evade questions on the 1984 anti-Sikh riots; by saying he was very young when it took place. This time, he offered consolation to those who lost their families and presented himself as someone who is with them in their quest for justice. However, his statements were safe and preventing to open the failures of his party. Rahul’s statement does not address the real issue of Congress party involvement in those killings, and Rajiv Gandhi’s unwillingness to address the issue honestly, but it is at least more honest than the answer he gave Arnab Goswami in his TV interview of 2014, where he his answer was totally irrelevant.

Rahul also talked about the Jammu and Kashmir suffering from violence. He said terrorism in Kashmir has increased during the NDA government. He claimed to have brought young Kashmiris to the mainstream and offered them educational opportunities and jobs. He said there was virtually no space for terrorism when UPA was in power.  He also talked about the recent UPA failures. He wished that Berkley could prove to be a new start for both him and UPA. He said that during 2011-2012, some arrogant people had entered the UPA and they stopped talking to other people, who affected the party’s future plans and it is one of the reason why the party is suffering.

All in all, Rahul Gandhi did a much better job than before, but, he was being less than candid in some areas. But then, maybe, this is what makes him a better politician today than what he was before