Pulwama Attack Aftermath: Steps taken and What more needs to be done 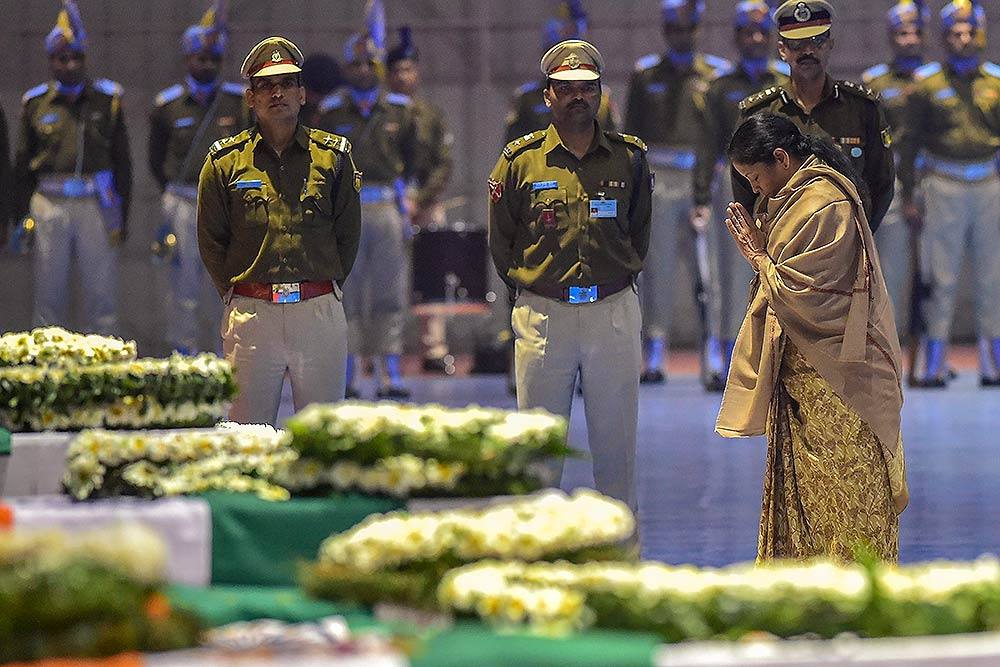 It is an open secret that Pakistan harbours terrorist organizations and such militant groups that are waging a war against India. These extremists indulging in cross border terrorism are backed by the Pakistani Military and ISI. The Pulwama attack on 14 February was carried out by Jaish-e-Mohammad, an outfit operating from Bahawalpur, Pakistan. The martyrdom of 44 CRPF jawans in the attack has led to a call from Indians all around the world to boycott Pakistan in every sphere. The government too has initiated several measures to isolate Pakistan in the global arena. The latest step in this regard, announced recently, has been to divert our share of river water under Indus Water Treaty.

The Indus water treaty was signed on 19 September 1960 in Karachi and brokered by the World Bank. It was signed between Jawaharlal Nehru and Ayub Khan. The treaty fixed and delimited the rights and obligations of both countries concerning the use of the waters of the Indus River system. Indus originates from China, passes through Kashmir into Pakistan and drains into the Arabian Sea. The river is joined by 5 other rivers- Jhelum, Chenab, Ravi, Beas and Sutlej. The water from these rivers was collectively used by people of the region since ancient times. However, the partition in 1947 put this peaceful river water sharing in jeopardy.

The newly formed states of North and North-western India were at odds with Pakistan regarding sharing of water. A standstill agreement and an Inter-Dominion accord weren’t fruitful in formalizing a way of river-water sharing and thus a conclusive treaty was needed. In 1951, David Lilienthal, former head f US Atomic Energy Commission was in the country for research. He advised involving the World Bank for their assistance in creating an arrangement for the river system. Thus World Bank and Engineers from both the countries worked together for a solution that culminated in the Indus Water Treaty in 1960. 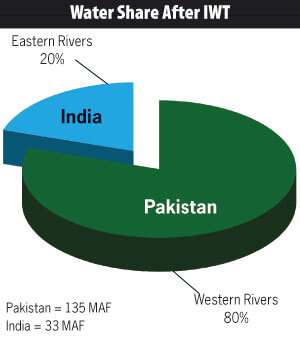 The preamble of the Indus Water Treaty states that- “The Government of India and the Government of Pakistan, being equally desirous of attaining the most complete and satisfactory utilisation of the waters of the Indus system of rivers and recognising the need, therefore, of fixing and delimiting, in a spirit of goodwill and friendship, the rights and obligations of each in relation to the other concerning the use of these waters and of making provision for the settlement, in a cooperative spirit, of all such questions as may hereafter arise in regard to the interpretation or application of the provisions agreed upon herein, have resolved to conclude a Treaty…”

According to the treaty, India will get 33 Million Acre Feet (MAF) at 20% of the total whereas Pakistan will get 125 MAF at 80%. Article 2 of the treaty states that “All the waters of the Eastern Rivers (Sutlej, Ravi and Beas) shall be available for the unrestricted use of India…” The Western rivers shall be allowed unrestricted flow to Pakistan. However, India can use the Western Rivers water for ‘non-consumptive’ needs like irrigation, electricity etc, which we haven’t effectively used till yet. In 2019, India utilizes 93-94% (30 MAF) of its share, and 6-7% (3 MAF) of India’s unutilised share flows to Pakistan, resulting in a total of 87% water flowing to Pakistan. Despite its shortcomings, the IWT is the most successful water-sharing treaty in the world.

After the Uri Attack in 2016, PM Narendra Modi said: “Blood and Water cannot flow simultaneously”. But today, India is finally walking the talk. “Under the leadership of Hon’ble PM Sri Narendra Modi Ji, Our Govt. has decided to stop our share of water which used to flow to Pakistan. We will divert water from Eastern Rivers and supply it to our people in Jammu and Kashmir and Punjab,” Union Minister Nitin Gadkari tweeted on Thursday. India has thus decided to fully utilize its share of unused river water. He further said that the UJH project would store our share of water for use in J&K and the balance water would flow from 2nd Ravi-BEAS Link to provide water to other basin states.

Not so long ago, India also approved several dams along river Chenab, Kishenganga and Jhelum. Utilising the provision of ‘Limited Hydropower Generation’ along with this recent announcement, India is taking steps towards choking Pakistan through this front. The construction of Projects, as well as diversion of waters, will reduce the flow of water to Pakistan. It wouldn’t affect their allotted share of the treaty yet this enough to disrupt their water needs. This move is enough to send a strong message to Pakistan without disrupting the provision of the treaty.

OTHER STEPS TAKEN IN AFTERMATH OF PULWAMA ATTACK AND THEIR IMPLICATIONS

India started efforts to isolate Pakistan from the morning of the 15th itself. After the Cabinet Meeting on Security, Finance Minister Arun Jaitley announced that India is withdrawing the MFN status given to Pakistan. The status of Most Favoured Nation was provided to Pakistan in 1996 to ensure non-discriminatory trade practices. Pakistan, however, didn’t reciprocate with the status. India has now raised the customs duty on all imports from Pakistan to 200%.

Pakistan’s exports to India now stand at $450 million dollars with total bilateral trade amounting to $2 billion. The withdrawal of MFN status will thus impact Pakistan’s trade however it wouldn’t have a much noticeable impact. The move has more symbolic than economic implication. It reduces the credibility of Pakistan in World Economics. Moreover, India is also preparing a dossier that is to be presented at a meeting of FATF(Financial Action Task Force) being held in Paris this week that links Pakistan to the attack in Pulwama so as to seek the blacklisting of Pakistan as part of economic punitive measures.

On the 15th, foreign secretary Vijay Gokhle addressed the envoys of several countries in India to apprise them of Pakistan’s involvement in cross-border terrorism. Heads of 25 states, including the P-5 met Mr Gokhle as part of the diplomatic process initiated to isolate Pakistan in the global arena. Iran had also faced a similar attack on its personnel by an organization linked with Al-Qaeda. Thus, in the aftermath of these gruesome terrorist attacks that shook the two nations, External Affairs Minister Sushma Swaraj visited Iran and had a meeting with the Deputy Foreign Minister of Iran Seyed Abbas Araghchi. Araghchi shared the information regarding the meeting through a Twitter post in which he told about both the countries agreeing on close cooperation to combat terrorism. Araghchi ended his tweet with an emphatic ‘Enough is enough”. Speculations are rife that these 2 nations will join hands for a military exercise as well.

The government also revoked the security provided to the separatist leaders of J&K in light of the Pulwama attack. Abdul Ghani Bhat, Bilal Lone, Hashim Qureshi, Shabir Shah and most importantly Mirwaiz Umar Farooq, amongst others, have had their security covers withdrawn. More than 10 crores have been spent on the security of these Hurriyat leaders. Through this, over 1,000 police personnel and over 100 vehicles are freed. This has sent a clear message to the leaders that they can’t enjoy government protection whilst working against the interests of the nation.

In addition, the security of 155 political persons and activists, who did not require the security provided to them based on their threat assessment and their activities, was also withdrawn. This includes Shah Faisal, who resigned from the IAS and Wahid Parray.

India has also suspended the cross-border bus service between Poonch in J&K and Rawalkot in Pakistan. Moreover, India has also banned all Pakistani artists and celebrities from working in India. On Military front, the army has detained 23 men suspected to be associated with Jaish-e-Mohammad, the organization responsible for the attack.

FURTHER STEPS THAT NEED TO BE TAKEN

This act of terror was carried out by Jaish but clearly has the backing of Pakistan. The government has taken some steps to ensure isolation of Pakistan but more needs to be done. India has received backing from Israel, US and France in the wake of these attacks. Capitalizing on this support, pressure should be put on China to declare Masood Azhar as a global terrorist in the UN. China used its Veto to block the move of banning Azhar in 2016 but times have changed. If China still protects Azhar and Jaish, India’s policies with regard to China will require a second look.

The calls for repealing the article 370 have risen in the past decade. Even the now more politically aware citizens are demanding to do away with the article, which gives a special status to J&K and makes the state a kind of ‘separate’ entity from the rest of the country. Moreover, under article 35-A, the ‘permanent residents’ of the state are given special rights with regards to property, jobs, education etc depriving the rest of the citizens of availing opportunities in the state. It is long argued that this isolation of the state has led to disconnect and discontent with the rest of India and thus gave rise to militancy. Doing away with it will certainly help in improving the state which is a hotbed of rising extremism against the rest of India.

Repealing of the article can be done by a presidential order but there are dissenting voices in relation to this issue. J&K leaders argue that the Indian state needs to be less interfering in the state’s affairs and their argument receives vehement support from sections of Indian Media. They say that removing the article won’t make any difference and would only increase the hostilities. Keeping their voices in mind, Article 370 has only ever increased the distance between J&K and India. We might as well do away with it because there’s no way the situation will get worse than it already is.

A major change that is required is the hostility towards the Kashmiri Muslims. There are sections of society that view the Kashmiri Muslims with a suspicious eye. They consider the Kashmiris as the enemy of the state. And the feeling is mutual. More integration of the Kashmiri citizens is thus needed. Awareness, engaging with Kashmiri students, Cultural contacts with J&K and doing away with article 35-A will help with this situation. It will be a long process but one that is most necessary.

It won’t be an understatement to say that it is now or never for India with regards to countering terrorism. The country has suffered enough and one more gruesome attack, and we’ll be looking at a full-blown war. We’ve been at peace with Pakistan for a long time now. The diplomacy of talks and discussion should now pave way for more stringent actions. The need is to thus retaliate in such a way that Pakistan is broken from within and is more concerned about the majority of its own citizens than what a handful of its buffoons think about our glorious Kashmir. The martyrdom of those brave Jawans should not go in vain.