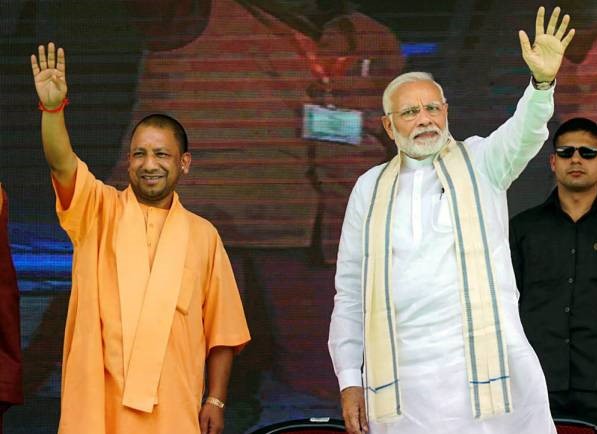 The Aatma Nirbhar Uttar Pradesh Rojgar Abhiyan was launched by Prime Minister Narendra Modi on Friday, the scheme which aims at providing jobs to 1.25 crore migrant workers and others in Uttar Pradesh, who returned from other states and lost their employment during the nation-wide lockdown imposed to contain the spread of the deadly Coronavirus in the country.

PM lauded the Government of UP making efforts to bring back the migrant labour belonging to the state, by facilitating hundreds of #ShramikSpecialTrains

The Aatma Nirbhar Uttar Pradesh Rojgar Abhiyan will be covering 31 districts of the state, which has witnessed the maximum number of migrant workers returning to their homes after the lockdown was imposed in March end. The mega job scheme will be undertaken as a part of Garib Kalyan Rojgar Abhiyan, launched by the Prime Minister on June 20 for 116 districts in 6 states across the country.

The abhiyan was launched by PM Modi virtually. Uttar Pradesh chief minister Yogi Adityanath was also present during the virtual launch of the campaign. Officials have said that the Aatmanirbhar UP Rojgar Abhiyan is focused on providing jobs, promoting local entrepreneurship and creating partnerships with industrial associations and other organisations to create employment opportunities. They have said the target of providing work has been given to different departments with a focus on 25 categories of works.

Speaking at the event, the Prime Minister also asked people to maintain ‘Do gaj doori’, till the time a vaccine is not developed for COVID-19. “We all have to maintain ‘Do gaj doori’ and wear face masks till the time vaccine is not developed for coronavirus”, PM said during launch of ‘Aatma Nirbhar Uttar Pradesh Rojgar Abhiyan’.

PM Modi said that Uttar Pradesh has become a peaceful state and has also become attractive to global investors. With the announcement of making Kushinagar Airport international, the government hopes that the region will soon generate employment for youth. Other than providing direct jobs, Aatma Nirbhar Rojgar Yojana also aims at promoting local entrepreneurship. It will also encourage industrial associations and other organisations to create employment opportunities. The UP Rojgar Abhiyan is in addition to the Centre’s schemes being run under the Aatmanirbhar Bharat programme to bolster various sectors. The 125-day campaign will provide employment to migrant workers and others in the state.

The Prime Minister also lauded UP CM Yogi Adityanath saying that UP is bigger than many countries of the world. Looking at the hard work done by Uttar Pradesh govt during COVID19 pandemic, we can say that it has managed to save 85,000 lives. UP having population of 24 crore and could have more number of corona cases but yogi Adityanath, managed to stop spread of COVID-19.

The population of UP is equal to the combined population of four European countries, the UK, France, Italy and Spain. These four countries have reported 1.3 lakh deaths, while UP, with a similar population, has recorded 600 deaths, which speaks volumes for the efforts of the state government,” the Prime Minister said.

The Prime Minister, through video conferencing, spoke to various beneficiaries of Govt Schemes such as Vinita Pal of Gonda, Tilak Ram of Bahraich, Qurban Ali of Siddhartha Nagar, Narendra Kumar of Gorakhpur, Ram Chandra of Sant Kabir Nagar and Deepu of Jalaun, and asked them how they had re-established their business amind the Corona crisis.

He appreciated their efforts to turn the crisis into an opportunity by availing the benefits of the various government schemes.

The Prime Minister asked Tilakaram that “you have got a house, but what will you give me?” In response, he said, “We pray that you remain the Prime Minister all your life.” Modi then told him, “You will do one thing for me. You will educate your children properly and keep me informed about it.”