MAMATA BANERJEE: A Glimpse Of Her Political Career Mamata Banerjee, the incumbent chief minister of West Bengal (in office since 2011) might have to face some political hurdles in winning the assembly election battle next year if she does not handle the Covid-19 crisis with the cyclone Amphan well enough. This is a mere prediction, based on the last assembly election performance, where the CM’s Trinamool Congress Party (TMC) seats fell from 34 to 22 out of 42 seats. The BJP raised its numbers to 18 and it is known that the national party has firmed its grip to win the upcoming elections.

The leader has lately been popular for her outrageous protests against the Citizenship Amendment Act (CAA) and the National Register of Citizens (NRC). She protested against the bills from the same day when the bills were tabled in the parliament by Union Home Minister Amit Shah. She called the laws “divisive” and that she would never allow them to be enacted in her home state. With regards to the CAA, she said that in secular country like India, laws couldn’t be made on the basis of religion. She said the government didn’t have the right to ask those who have been living in India for the past many decades to suddenly leave the country. she even termed the fight against the bills as the “second war of independence”.

At the same time, she has been on a constant spat with the Union Home Minister Amit Shah over the deportation of the migrant workers back to West Bengal through the special Shramik trains, at a time when the state is among the top 10 most affected in the country. Very recently, Shah has asked the CM to show the results of tackling the Covid-19 crisis.

Also Read -   Mamta Banerjee Government: How it has fared in west bengal?

Here is a glimpse of the Chief Minister’s political Career:

Mamata Banerjee is the ninth chief minister of West Bengal. She is the first lady to hold the CM’s post in the state. In 1997, Banerjee had dissociated from Indian National Congress (INC) and founded her own party, Trinamool Congress Party (TMC). Popularly referred to as Didi (elder sister), in Bengal, she won a sweeping history in the 2011 legislative assembly elections. The election uprooted the 37 year-long rule of the Communist Party of India (Marxist) or CPI(M) and since then, Banerjee has been serving as the CM of the state. She was re-elected to power in 2016.

The West Bengal CM has also held the record for being the longest serving Railway Minister of India after two consecutive terms in that post. Her other prominent positions include Minister of State (MoS) for Human Resource Development (HRD), Minister of Coal, Women and Child Development and Department of Youth Affairs and Sports.

Mamata Banerjee was voted to power by the largest anti-corruption coalition of India- India Against Corruption. She was deemed as the most honest politician of the country.

The strong critic of the ruling Bhartiya Janata Party (BJP) started her career in mainstream Indian politics in 1997. But she had been associated with Indian politics since the 1970s. Lets look at her political career in her early days of life. 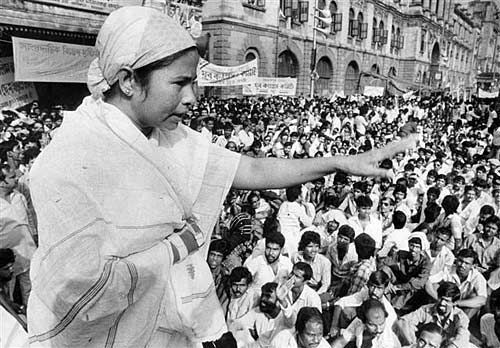 In her second tenure as the Railway Minister of the country, she introduced the Doronto Express that connected major cities and also introduced several women-centric trains. Mamata Banerjee has also represented India in the United Nations General Assembly, not once but multiple times. Some of the events include:

Representing the nation in the World Women Round Table Conference held in Russia as a woman parliamentarian, Attending Working Women Conference of International Confederation of Free Trade Union (ICFTU) and International Labour Organisation (ILO), held in Kuala Lampur, Malaysia. She is deeply regarded for organising protests against women related atrocities and for restoring human rights.