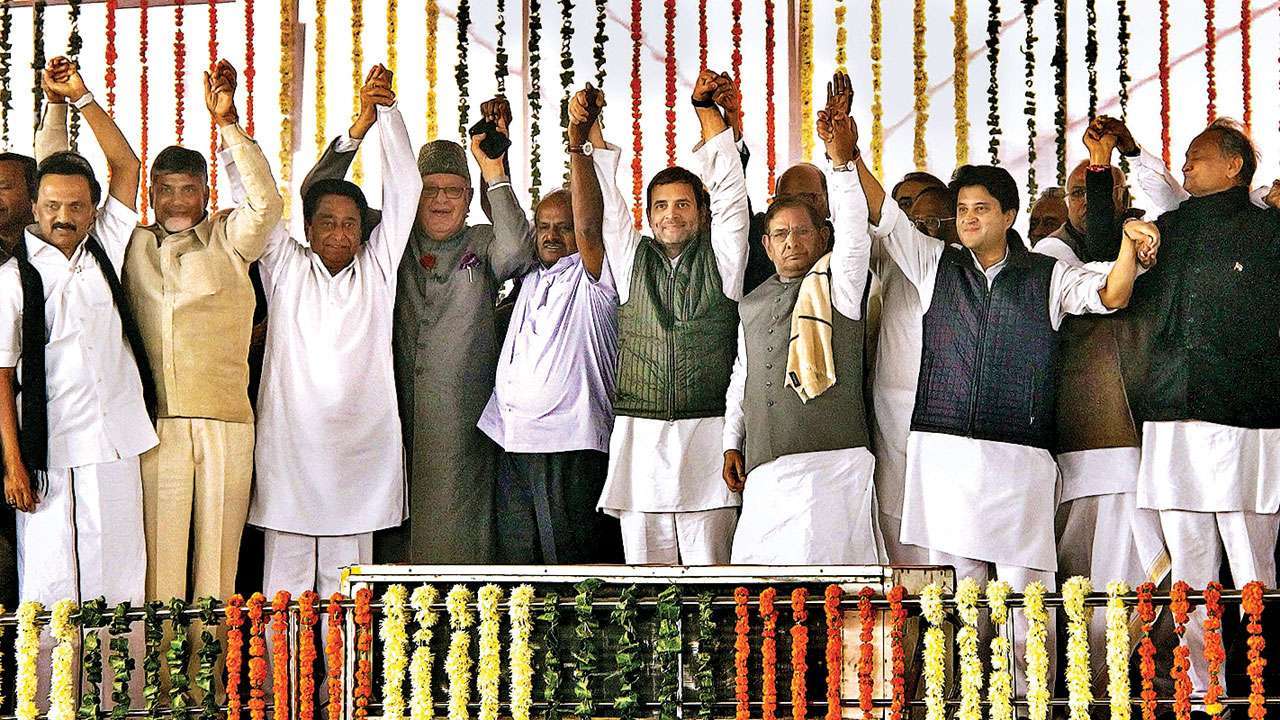 There is a popular motivational anecdote which is circulated on whatsapp it goes as follows.

During April 1945 when Hitler is trapped in his bunker a soldiers comes up to him and says,” Sir, we are surrounded by enemies from all sides. What to do?” “Good. It means we can attack enemies in any direction we want.” Replies Hitler. Moral of the story never give up and always stay be positive. Current situation of BJP camped at Ramlila Maidan is no different from Hitler trapped in his bunker. Only difference being in BJP battle has just began and in Hitler’s case it was annihilation. 22 different political leaders across 24 different national and regional parties assembling under one umbrella organisation, singing a monotonous song of making Modi vacate the chair of PM in the first month of 2019 has set the tone for the upcoming Lok Sabha elections. In the cover photos of the MGB which occupied the front pages next all the leaders look united,determined and tenacious but in reality its just a humble effort to hide the unseen fault lines which ,acclaimed strategist and ‘Chanakya’ of BJP, Amit Shah will leave no stone unturned to exploit.

Kairana was highly discussed,debated and analysed bye-election, which was held to fill the LS seat of Kairana after the sad demise of BJP parliamentarian Hukum SIngh. Instead of fielding their candidates “Behenji” and her beloved “Bhatija” decided to extend their unified support to RLD candidate Tabassum Hasan. End product RLD won, BJP lost, thus triggering the opposition parties into accepting the fact that MGB is feasible idea which can be implemented to prevent BJP from coming to power. But the electoral numbers of the much  hyped By-election tend to tell another story.

Also Read -   Will Lingayat as a new religion lead Congress to a victory in Karnataka?

First point to be noted is the drastic change in the voter turnout from 73.08 in 2014 to 58.20 in 2018 which amounts to about 15%. Whenever the voting percentage has been high the population has always been in BJP’s favour, hence in 2018 where the turnout was poor there wasn’t much expectation from the saffron party. Being a By-election the party took things for granted, and this was clearly visible through the behaviour of the spokesperson post results. Secondly if we add up the 2014 vote share of SP+BSP+RLD it was about 47.63% and their 2018 vote share 51.26% just a 4% increase. On the other hand BJP’s vote share went down from 50.54& to 46.51% just 4.03%. So all those hugh propaganda machinery which was employed and votes polarised under the MGB banner  just gave the MGB a meager 4% margin.

Raisina hills via UP

It is always said that one who captures hearts and minds of UPians rules the nation. UP being one of the most populous states which send highest number of parliamentarians to the LS represents the mood of the nation. With the recent hollow victory in Kairana “behenji” and her “bhatija” reminisced their nostalgic days of the early 1990s where “Mile Mulayam kashi ram, Hawa ho gaye jai shri ram” used to echo in the streets of Pradesh and had won them 273 seats in the 1993 assembly elections with 30% of the votes. But sadly this alliance didn’t last long and ended with infamous guest house episode, sowing permanent seeds of enmity between cadres of the two. But with the recent floodgate of Hindutva politics sweeping UP in 2017 assembly elections in order to survive they understood the importance of clinging on to one another.

In the last 5 LS elections twice the party which was ruling at centre has won maximum seats in UP, and both the times it was NDA, first under Vajpayee in 1998 and under Modi in 2014.

In 2017 in spite of not fielding a single Muslim candidate the native population wholeheartedly let the lotus bloom, whereas none of the 100 Muslims candidates fielded by Mayawati were elected showing a trend that the population is moving away from the traditional electoral practices.The MGB whose vote base includes the famous Y+M+D equation (Yadav,Muslim,Dalit) are contesting 76 seats out of 80,36 each leaving t4 for the grand old party. As per the approval ratings on November 2018 the MGB are expected to cut down BJP’s tally by half to 31 with 44% of vote share, and themselves with 44 out of 80 seats with 44.7% of the share.  31 out of 80 is not a bad projected score for NDA keeping in mind that 73/80 was an anomaly verdict result of 10 years of anti-incumbency. With the reports of Modi contesting from Mathura the centre of gravity might shift from Varanasi to the Western UP where the Jats may compensate for the loss of votes.

Too many michelin star chefs ruin the dish

One of the most recent act of MGB was the Bihar JDU-RJD model where Nitish Kumar of the JDU broke up within two years and formed government with BJP. Currently an ally in NDA Nitish Kumar has a clean image for maintaining a corruption free ‘sushashan’ or good governance, and unarguably first choice of PM for the MBG. C Rao of TRS who has taken a central stage for his campaigning of third party, non congress-non BJP government  is strategizing for the chair of PM. The grand old party wants to continue their legacy of ‘family-raj’. The list of potential candidates goes on and on, and on the other hand thers just one person. BJP so far has perfectly managed to bank upon the sentiments of the public using PR methods of quoting chanakya, and eye catching statements like “Pakistan hates Modi, so does the MGB decide wisely in 2019.* Corruption crusader and founder of AAP Kejriwal suddenly shares stage with RJD,INC,TMC personalities, this sudden change of behaviour is difficult to explain   “honest” common man. Didi whose claim to fame was declutching Bengal from the 25+ years rule of Jyoti Basu and the Lefts, today have to marginalize with them.

Also Read -   Meet Bharat Singh A 22 Year Old Entrepreneur That Has The Best Strategies That Could Skyrocket The Fitness And Political Industry.

Fault in their stars

Relying on the data from recently concluded state elections in three states of the Hindi belts, one can easily make out that BJP’s tally shows depressing trends. But these are just projections based on inconclusive data. In a state like Rajasthan where slogans like “Rani teri khair nahi, Modi tujh se bair nahi” slogans made things quite clear who was the target of their outrage. People centric populist measures like Jan dhan Yojana, Ujjwala yojana, Gram Jyoti Yojana, PM Awass Yojana, Jan Aushadhi Kendra, and the most ambitious Ayushman Bharat has really made impact on lives of ordinary citizen. In 2014 Modi led BJP showed the people of India a new type of propaganda called development politics, where he claimed how the people of Gujarat had moved over caste,religion and overwhelmingly voted for BJP and how they had progressed. And this development politics of Gujarat mode worked off. Now like a Lion who has tasted human blood Indian public’s wants and expectation from the Government with respect to social security has increased and they have began to follow Modi’s promises like those rats from that famous fairy tale of the flute player. The polarisation politics based on Caste,religion no more attracts them the way it used to be. Thats why inspite of all the hue and cry like Hitler in his trapped bunker Modi is calmly waiting for the right time to attack….