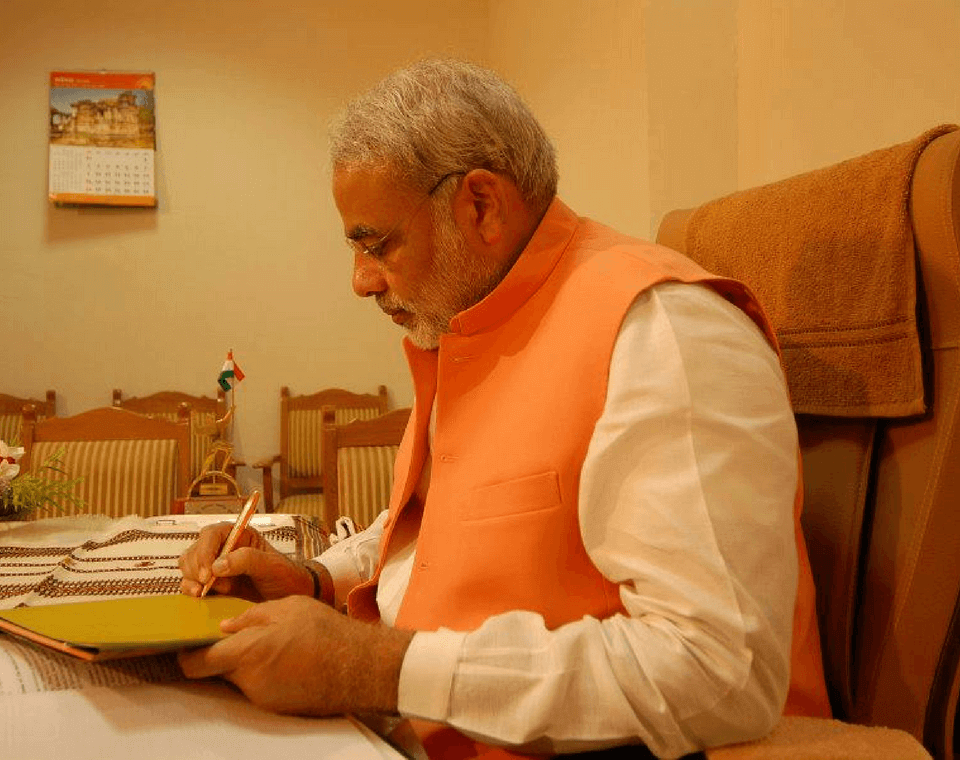 When it comes to winning elections, Narendra Modi comes out at the top.Modi’s win percentage in the elections is far at the top compared to the other politicians. No one comes close to his unmatchable campaigning and his elections strategies are always out of the box. Modi has the qualities of a strong leader, a great visionary, a stellar organiser, a meticulous planner and a true strategist who created a big mass mobilization by building a huge organizational bandwidth. When it comes to bossing the elections, we can safely infer that Modi is the ‘ELECTION KING’.

2002 Gujarat Elections: Where it all started:

In 2001, Keshubhai Patel’s health was failing and Narendra Modi took his place for a year. However, after the 2002 riots and Godhra Kand, BJP was facing serious allegations and was on a back foot. That is when Modi applied his game plan. The situation was tense. There was ongoing violence between Hindus and Muslims in various parts of the state. Modi took advantage of this situation to gather votes in his favour. He played the communal card. He played the emotions of the Hindus and thus focused on getting the votes of the majority of the population of the state. He spoke indirectly against the Muslims and brought all the Hindus in favour of voting him. As a result, BJP won 127 out of 182 seats and a comfortable win for BJP was the result of Modi master plan. This was his first full term as chief minister of Gujarat.

2007 Gujarat elections are considered one of the dull elections in the modern politics. The previous term of Modi as chief minister of Gujarat showed tremendous progress in the state. Gujarat saw improvement in its infrastructure as well as rural areas also showed signs of development. By 2007, it was all about Narendra Modi. Modi was proving to be one of the best leaders in recent times. Congress was out of clue during 2007 elections. It was more like Modi vs. Congress, rather than BJP vs. Congress.  Modi cleverly filled up the political vacuum of ideas and vision in the state by revolving his party’s campaign on his personality and leadership traits. Modi charmed the youth and women with his oratorical skill and claimed he is macho enough to take on international jihadi terrorists. His I-me-myself speeches smack of an exaggerated sense of power but that is precisely what is worked well with Gujaratis, who had no presence in New Delhi’s power structure or in the powerful national institutions including the army. As a result of his charismatic personality and his unmatchable communication skills, Modi defeated Congress, who had focused on scheduled tribes for their vote banks. This election was the first step in people’s mind that Modi is much more than a chief minister material.

2012 Gujarat Elections: A hatrick of wins:

In August, Narendra Modi seemed a trifle embattled. A lackluster monsoon, farmer suicides, ministers embroiled in financial scams – for the first time in his decade-long rule in Gujarat, the Chief Minister was feeling the pressure. But come September, as he announced his Vivekanand yuva vikas yatra, neatly appropriating the legacy of the nationalist leader, Mr Modi had put behind him all disadvantages of the month before. He then set off criss crossing the length and breadth of the state showcasing his “Vibrant Gujarat”. The message was lost on none – Narendra Modi was still a crowd puller. This strategy of Modi pulling a big scheme or plan just before the elections was very vital for BJP.As a result, BJP won for the straight third time and Modi had already become a forerunner for the 2014 Lok Sabha elections.

2014 Lok Sabha Elections: Taking it to the next level:

Manmohan Singh’s campaign as PM was not as successful and Modi was clearly considered favourite for the post of Prime Minister. The 2014 Lok Sabha campaign of BJP and Modi was clearly a marketing masterclass. Narendra Modi’s campaign team had used some very innovative and timely decisions that had helped give high visibility and add potent muscle to the election campaign. Credits should be given to the campaign managers of the BJP. When they conducted consumer research, they found that the brand value of Modi was much higher than BJP.  Therefore, they took the decision to project Narendra Modi instead of projecting BJP or the NDA in all their campaigns. Another Modi masterplan to have a catchy slogan. ‘Ab ki Bar, Modi Sarkar’. It was extremely catchy. It was easy on the tongue. Everybody could say it. Even the non-Hindi speakers could understand what it stood for and they could easily articulate it. So, it resonated with everybody. Also, developments in Gujarat in the last 10 years were clearly visible to everyone. Everybody believed that Modi was a doer and he could get things done. There was a widespread perception that that there was a policy paralysis with the previous government. Modi and his team took advantage and leveraged his image as a doer.

Thus extraordinary marketing skills, catchy slogans and his image as a doer worked for Modi and BJP and as a result, he was selected as the 14th Prime Minister of India.

Prime Minister Narendra Modi dressed like Sant Tukaram — round pagdi, long-sleeved kurta and the traditional shawl — at an election rally in Pune, near where the poet hailed from. The BJP’s star campaigner has also been spotted wearing a Kolhapuri pheta, the traditional headgear, in an election advertisement — and even a Mavla topi, once worn by Maratha soldiers, in a promotional video for the party candidate in Thane. With electoral alliances breaking and just four days left for voting in Maharashtra, Modi’s carefully crafted metamorphosis is a clear indication of his campaign strategy. He has chosen to be more Marathi than the sons of the soil. From speaking the local language, even region-specific dialects, in all his campaign speeches to evoking the state’s poets and social leaders, Modi ensured that the allegation of “Gujarati bias” leveled by Shiv Sena and Maharashtra Navnirman Sena has not gained much ground. Modi this time pleased the Marathi people by going deep within their roots and praising their culture. This developed a special place in hearts of the Maharashtra people and as a result of this fantastic campaign, BJP formed the government in Maharashtra.

The outcome of the just-concluded assembly polls in Uttar Pradesh still sounds unbelievable and the magnitude of the Bharatiya Janata Party’s (BJP’s) victory has left even the most optimistic party cadres in a daze.

Also Read -   What went wrong with BJP in the Gujarat Rajya Sabha Elections?

The first pillar of this victory edifice is the most obvious—the leadership of Narendra Modi. How else can one describe the phenomenon where just months before a crucial election that has national ramifications, a leader shows the courage to take the apparently unpopular decision of demonetization? Despite the sheer inconvenience to the public that was magnified several times and played across the media for weeks, the people voted for Modi in an unprecedented manner. Uttar Pradesh has also established emphatically what people like most about Modi—his decisiveness when it comes to national interests. Modi has shown time and again that national interest is always paramount. The rapturous response Modi drew in Varanasi, where he campaigned for three straight days, only reinforced this aspect that he believes in leading from the front. Twenty-four rallies by Modi, over 150 by Shah and hundreds of other senior leaders left no corner of the state untouched. The eagerness to reach out to people was so much that the PM and party chief themselves conducted two roads shows each. In addition, several innovative contact programs such as video vans and Parivartan Sandesh (transformation message) bikers were also organized.

There are many more examples of why Modi can be termed as the ‘ELECTION KING’. His leadership qualities are quite extraordinary. His communication with the common people is so apt that he clearly affects the hearts of the people. His campaigning policies are quite brilliant and out of the box. This makes him a unique leader and a great politician. We all await the campaigning strategy for the 2018 Gujarat Elections as well as the upcoming Lok Sabha elections.