On 10 January 1966, after the shocking and mysterious death of the Prime Minister of India, Mr Lal Bahadur Shastri, the Congress faced the challenge of political succession for the second time in two years. This time there was an intense competition between Morarji Desai and Indira Gandhi. Morarji Desai had earlier served as the Chief Minister of Bombay (today’s Maharashtra and Gujarat) also as a minister at the centre. Indira Gandhi, the daughter of Jawaharlal Nehru, had been Congress President in the past and had also been Union Minister for information in the Shastri cabinet. This time the senior leaders in the party decided to back Indira Gandhi, but the decision was not unanimous. The contest was resolved through a secret ballot among Congress MPs. Indira Gandhi defeated Morarji Desai by securing the support of more than two-thirds of the party’s MPs. A peaceful transition of power, despite intense competition for leadership, was seen as a sign of maturity of India’s democracy. It took some time before the new Prime Minister could settle down. While Indira Gandhi had been politically active for very long, she had served as a minister under Shastri only for a short period of time. She faced much difficulties but managed to gain control over the party and to demonstrate her skills. She became the Prime Minister in 1967. She ruled the country from 1967-71. Then came her second tenure. 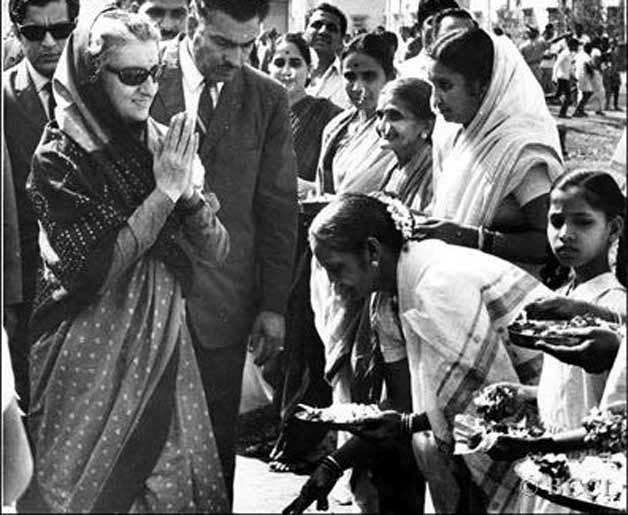 In the elections of 1971, Congress had given the slogan of garibi hatao (remove poverty). However, the social and economic condition in the country did not improve much after 1971-72. The Bangladesh crisis had put a heavy strain on India’s economy. About eight million people crossed over the East Pakistan (today’s Bangladesh) border into India. This was followed by war with Pakistan. After the war, the US government stopped all aid to India. In the international market’ oil prices increased manifold during this period. This led to an over-all increase in prices of commodities. Prices increased by 23 percentage in 1973and 30 percentage in 1974. Such a high level inflation caused much hardship to the people. Industrial growth was low and unemployment was very high, particularly in the rural areas. In order to reduce expenditure, the government froze the salaries of its employees.

Student’s protest in Gujarat and Bihar, both of which were Congress ruled states, had far reaching impact on the politics of the two states and the national politics. In January 1974, students in Gujarat started an agitation against rising prices of food grains, cooking oil and other essential commodities, and against corruption in high places. The student’s protest was joined by major opposition parties and became widespread leading to the imposition of President’s rule in the state. The opposition parties demanded fresh elections to the state legislature. Morarji Desai, a prominent leader of Congress(O), who was the main rival of Indira Gandhi when he was in the Congress, announced that he would go on an indefinite fast if fresh elections were not held in the state. Under intense pressure from the students, supported by opposition parties, assembly election were held in Gujarat in June 1975. The Congress was defeated in this election.

In March 1974, students came together in Bihar to protest against rising prices, food scarcity, unemployment and corruption. After a point, they invited Jayaprakash Narayan, who had given up active politics and was involved in social work, to lead the student movement. He accepted it on the condition that the movement will remain non-violent and will not limit itself to Bihar. Thus the student’s movement assumed a political character and had national appeal. People from all walks of life now entered the movement. Jayaprakash Narayan demanded the dismissal of the Congress government in Bihar and gave a call for total revolution in the social, economic and political spheres in order to establish what he considered to be true democracy. A series of bandhs, gehraos and strikes were organised in the protest against the Bihar government. The government however refused to resign.

This was also the period when the government and the ruling party had many differences with the judiciary. The court said that the parliament cannot amend the Constitution in such a way that the rights are curtailed. The parliament amended the Constitution saying that it can abridge fundamental rights for giving effect to the Directive Principles. But the Supreme Court rejected this provision also. This led to a crisis as far as the relations between the government and the judiciary were concerned. In this case, the court gave a decision that there are some basic features of the Constitution and the Parliament cannot amend these features.

On 12 June 1975, Justice Jagmohan Lal Sinha o the Allahabad High Court passed a judgement declaring Indira Gandhi’s election to the Lok Sabha invalid. This order came on an election petition filed by Raj Narain, a socialist leader and a candidate who had contested against her 1972. The petition, challenged the election of Indira Gandhi on the ground that she had used the services of government servants in her election campaign. The judgement of the High Court meant that legally she was no more an MP and therefore, could not remain the Prime Minister unless she was once again elected as an MP within six months. On June 24, the Supreme Court granted her a partial stay on the High Court order till her appeal was decided, she could remain an MP but could not take part in the proceedings of the Lok Sabha. The stage was now set to a big political confrontation. On the night of 25 June 1975, the Prime Minister recommended the imposition of Emergency to President Fakhruddin Ali Ahmed. He issued the proclamation immediately. After midnight, the electricity to all major newspaper offices was disconnected. In the early morning, a large number of leaders and workers of the opposition parties were arrested. The cabinet was informed about it at a special meeting at 6 a.m. on 26 June, after all this bad taken place.

Consequences of the Emergency:

The actual implementation of the Emergency is another contentious issue. The government said that it wanted to use the Emergency to bring law and order, restore efficiency and implement the pro-poor welfare programmes. The government led by Indira Gandhi announced a twenty-point programme and declared its determination to implement this programme. The twenty-point programme included land reforms, land redistribution, review of agricultural wages, worker’s participation in management, eradication of bonded labour, etc. In the initial months after the declaration of Emergency, the urban middle classes were generally happy over the fact that agitations came to an end and discipline was enforced on the government employees. The poor and rural people also expected effective implementation of the welfare programmes that the government was promising. Thus, different sections of the society had different expectations from the emergency and also different viewpoints about it.