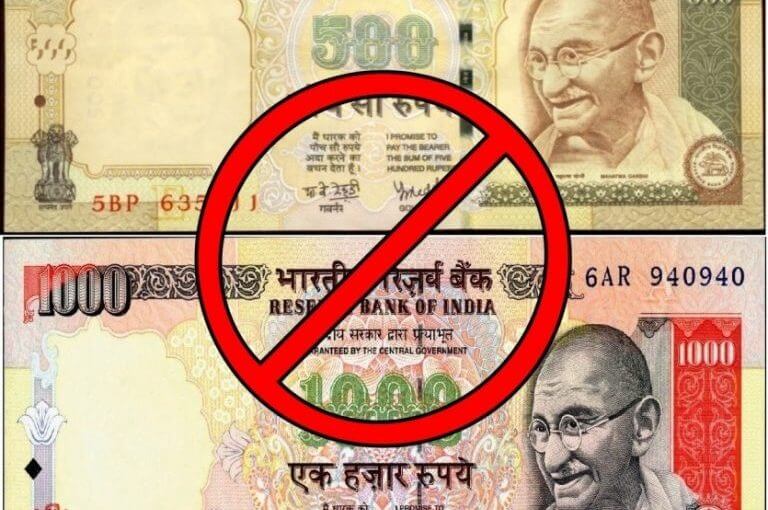 Narendra Modi, India’s prime minister, declared in an unscheduled national broadcast last year that all Rs 500 and Rs 1000 note would cease to be legal tender.This would leave those who had hoarded piles of illicit money from corruption and tax evasion with “worthless pieces of paper”.Less than a year later, a central bank report suggests the policy has not been very effective. It estimates that almost 99 percent of the high-value notes, which at the time of the announcement made up 86 percent of all the cash in circulation in India, were deposited or exchanged for new notes. Also, India’s GDP hit the lowest of 5.7% in the April-June quarter of 2017. So it is natural for questions to arise in everyone’s minds. Was demonetization a failure? How has demonetization affected GDP?  Why did GDP hit the lowest?

Why is demonetization not a complete disaster?

Demonetization failed in achieving its main objective of securing black money.
Less than a year later, a central bank report suggests the policy has not been very effective. It estimates that almost 99 percent of the high-value notes, which at the time of the announcement made up 86 percent of all the cash in circulation in India, were deposited or exchanged for new notes.  Today we know enough to say the immediate effect of demonetization on the economy was, in a word, disastrous. Economic activity was severely affected for three to four months, with its impact being felt most by those who could not afford a shock. The urban informal sector, the rural non-farm sector, and agricultural markets were all put through the wringer. People at the bottom of the ladder could not find work and many of those who had employment were not paid wages on time. All this has been reflected in revised numbers on GDP growth in 2016-’17; future revisions will show a bigger decline in the months after demonetization. The Economic Volume Survey II estimated a 30% jump in demand under the Mahatma Gandhi National Rural Employment Guarantee Scheme in six of the poorest states during November 2016-January 2017, an indication of rural distress. If we turn to medium and long-term impacts of demonetization, the balance is far from weighing in favor of the positive.

Even though the primary objective of demonetization failed, it may have inadvertently helped to wash funds clean. Looking beyond the stated aims, India’s demonetization policy had two unintended positive effects. First, it helped expand the tax collection net in a country where historically governments have struggled to raise the proportion of taxpayers from about 5 percent of earners. Demonetization led to the opening of more than 20m bank accounts in five months and the government says more than 9m new taxpayers were registered as a result. Second, demonetization was a forceful nudge towards digital payments. Fintech start-ups formalized large chunks of the informal economy. Everyone from large multiplex owners to roadside vendors was forced to accept digital payments and, unlike cash payments, digital transactions cannot be under-reported to evade the tax collector.

Did demonetization lead to 5.7% growth rate of GDP?

India, which had the mantle of world’s fastest-growing major economy, has now slipped below China in terms of growth. Our northern neighbor reported a growth rate of 6.9% for the last quarter. Data released by the Ministry of Statistics show that GDP slowed to 5.7% in the quarter ended June 30, from 7.9% in the corresponding period a year ago. The data also showed that the sectors that would have been affected by demonetization were the ones that took the biggest hit. The sectors that have performed badly are Manufacturing (1.2% vs 10.7%, a year ago); mining and quarrying (-0.7%), and construction (2% vs 3.1% a year ago). These are the cash-intensive sectors that took the worst hit after the cash squeeze. While the sectors that have grown rapidly after demonetization are financial services (6.4%), while trade, hotel, transport, communication grew 11%. Also, the impressive growth of 11% was shown by defense services.

A continuation of the demonetization combined with the uncertainty of implementation of GST has been the prime reason for it. Anjali Verma, Phillipcapital India, said that the impact of demonetization had faded, “definitely”. But the next quarter impact will be of GST (goods and services tax), which will have an adverse impact on growth overall, she said.

Why demonetization and GST are not the only reasons for low growth rate?

Growth has been slowing for five quarters now, and the government’s target of over 7% for 2017-18 suddenly looks untenable. At least there is some agreement on that. As a matter of fact, agriculture growth has also been low, which has nothing to do with demonetization and GST. Animal husbandry, mostly buffalo meat exports, has been a major factor in agricultural growth, but it has decreased since last quarter. Uttar Pradesh, India’s largest meat processing state faced huge shutdowns from end-March after Yogi Adityanath took over as the chief minister. Livestock contributes a little over 4% to GDP and roughly a quarter of total agricultural GDP. Agri-sector growth dropped to 2.3% in April-June quarter against 2.5% in the same quarter of 2016.

Another factor is government’s expenditure, which has risen to 27% in the April-June quarter. At the same time, government’s revenue-generating plans may not have worked as planned. Also, we cannot forget the cost of printing new 500 and 2000 rupees notes.

So, from these, it can be concluded that demonetization may have been the primary factor for the low GDP growth of 5.7% but also several other factors are responsible for it. However, the question remains, how long will the demonetization and GST keep affecting the GDP?