How Modi Government transformed the Aviation Sector in the last 5 years? 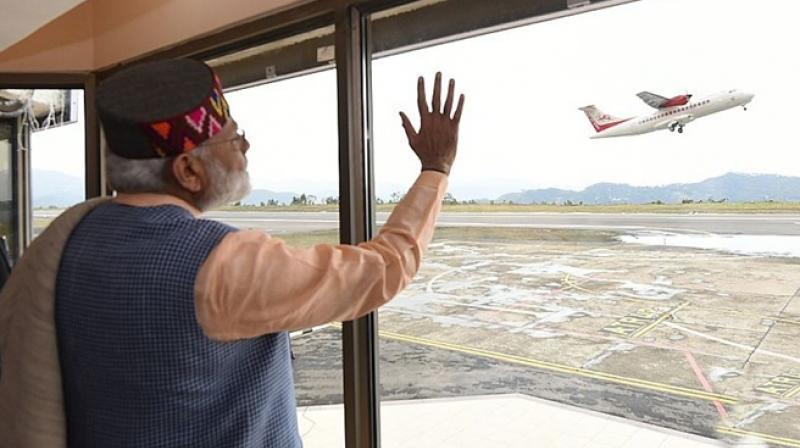 Civil Aviation Minister Suresh Prabhu inaugurated the Global Aviation Summit, 2019 on 15th January. During the inauguration of the summit in Mumbai, he commented about how India is one of the fastest growing aviation industries of the world. And going by his claims, it’s fair to say that that is absolutely true. The International Air Transport Association (IATA) has also stated that India will become the 3rd largest aviation market by 2025 after the US and China. This statement is made in the light of the fact that Indian aviation sector has grown in double digits for more than 50 months now and this trend is expected to continue for the next few years.
The current regime has extensively stressed the importance of connectivity and air travel among the Indian masses and has backed its words with concentrated efforts of government and private sector to realize this objective. The growth trajectory of the last 5 years is evident in this.
The aviation sector has witnessed healthy growth in back to back years now. Growth was recorded at 20 per cent and 18.8 per cent during FY2016-17 and FY2015-16 respectively in terms of passengers carried by Indian airlines. After a relatively stagnant growth between 2011 and 2014, the Indian air passenger traffic grew significantly. The air flier mark also crossed 100 million. 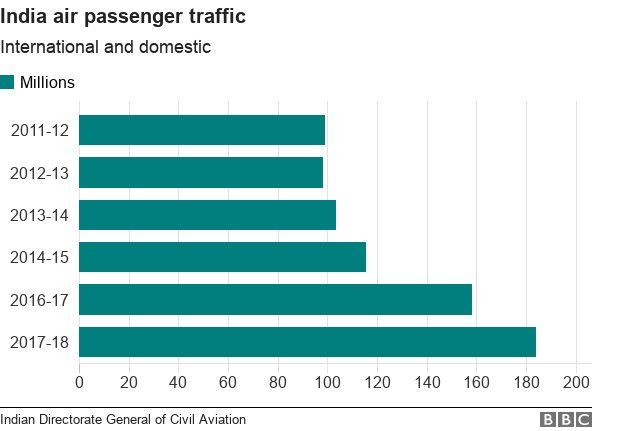 The cause of such positive numbers can be attributed to the rising middle class and several initiatives undertaken to propel this growth.

While our aviation sector had made considerable progress since independence, we were yet to have an integrated aviation policy. Thus this policy was launched in 2016 with a vision to make flying affordable and convenient and to enable 30 crores domestic ticketing by 2022 and 50 crore by 2027, and international ticketing to increase to 20 crores by 2027. Similarly, cargo volumes should increase to 10 million tonnes by 2027. A key feature of this is scrapping the 5/20 rule of the UPA regime. Now, the airlines can fly overseas if they have a fleet size of 20 aircraft or 20% of the total seat capacity in term of the average number of seats on all departures put together, whichever is higher for domestic operations.

Moreover, the DGCA will create a single window for all aviation-related transactions, complaints, queries etc. The new policy aims to give a push to the sector of Maintenance, Repair and Overhaul (MOR) so that India can develop as a hub for South Asia.

Perhaps the most significant step taken by this government for the aviation sector is UDAN-UDE DESH KA AAM NAGRIK, A well-thought acronym. This initiative was taken to make flying a reality for the small town common man and enhance the regional air connectivity. The scheme UDAN envisages providing connectivity to un-served and under-served airports of the country through the revival of existing air-strips and airports. Several route proposals have been put up for auction and the operators that won the bid would have to provide a minimum of 9 and a maximum of 40 UDAN Seats (subsidized rates )on the UDAN Flights for operations through fixed-wing aircraft and a minimum of 5 and a maximum of 13 Seats on the Flights for operations through helicopters. The fare of one hour journey has been capped at Rs. 2500. A Viability Gap Funding scheme is in place and concessions have been offered to the operators and listed airports to make flying affordable and support this initiative.

An investment of 16000 crores has been made to develop the Navi Mumbai airport to handle the rising passenger traffic. Through project DISHA (Driving Improvements in Service and Hospitality at Airports), The Airport Authority of India plans to upgrade the existing airports in order to enhance operational efficiency. This investment amounts to 25000 crores. The government also approved 17 other Greenfield airports in the country, to be executed and financed by the respective airport owners at an estimated investment of around Rs.30, 000 crore. Initiatives like WINGS-2017 and Air-SEWA have been launched to enable state governments to market themselves to airline operators and to assist passengers with all facilities from check-in to grievance redressal respectively. The government has also approved 17 Greenfield airports.

The aforementioned initiatives coupled with strong economic fundamentals and a period of low fuel prices led to a surge in the growth of the aviation industry. After several difficult years, the FY2016 reported combined profits of $1.29 billion for India’s airlines. This also included the first operating profit of Air India in a decade. The current market size of India’s aviation market is $16 billion. The air transport sector contributes $72 billion to our GDP currently. 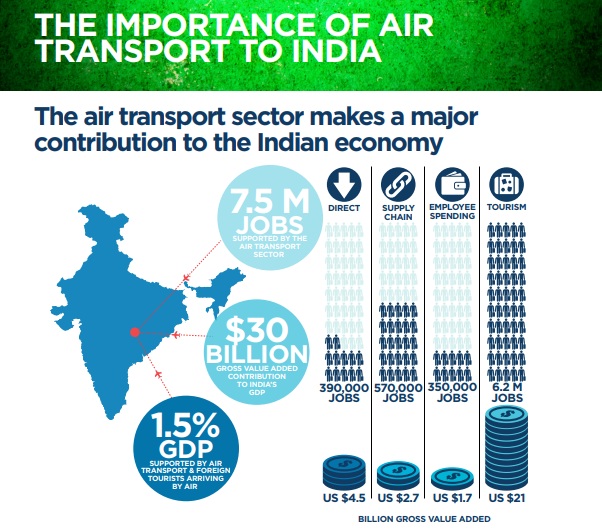 Through the UDAN scheme, the government has managed to add a number of smaller airports such as Shirdi in Maharashtra, Pasighat in Arunachal Pradesh and Pakyong in Sikkim, among various others, to India’s aviation circuit. This too has been a reason for passenger growth.
The civil aviation ministry has issued a draft charter of passenger rights detailing what the passengers are entitled to in case of flight delays, cancellation, baggage loss etc. The government also informed the Lok Sabha that at present seven greenfield airports are operational in the country. These are Hyderabad in Telangana, Bengaluru in Karnataka, Durgapur in West Bengal, Shirdi in Maharashtra, two greenfield airports in Kerala at Kannur and Cochin and Pakyong airport in Sikkim. The government has also placed a lot of emphasis on connecting the North-Eastern states and previously ignored parts of the country with air connectivity. Prime Minister Modi also inaugurated another airport at Jharsuguda on Odisha-Chhattisgarh border in September this year, giving a big boost to under-connected regions of the country, as it will connect Chhattisgarh’s capital Raipur with Jharsuguda in Odisha.
Improvisation of the processes and financials of flag carrier Air India was one of the focus areas of the government and the airline has reported operating profit of Rs 215 crore and Rs 105 crore for 2016-17 and 2015-16, respectively, against operating losses of Rs 2,636.19 crore and Rs 3,977.89 crore in 2014-15 and 2013-14, respectively. While this may be partially attributable to low oil prices, Air India has also introduced measures such as a fleet replacement to introduce newer fuel-efficient aircraft to rationalise its operations.

There existed a state of apprehension amongst economists that demonetization and GST might hinder the growth of this sector but it surged ahead nonetheless. DGCA’s data showed that December of 2016 witnessed a growth of 23.91% in air passengers. The next 11 months recorded 10.6 crore people flying domestically, which was more than the entirety of 2016 at 9.9 crores. The implementation of GST too didn’t impact this sector as the critics had predicted. This can be attributed to the rising living standards of masses, strong economic fundamentals, and implementation of UDAN etc
With projections of India set to rule the aviation market by 2035, and the allowance of 100% FDI in this sector, the state of this industry has never been so bright. The need is to capitalize on this momentum of the last 5 years and realize the vision of the current government where people wearing ‘hawai chappal’ can easily travel in a ‘hawai jahaj’.