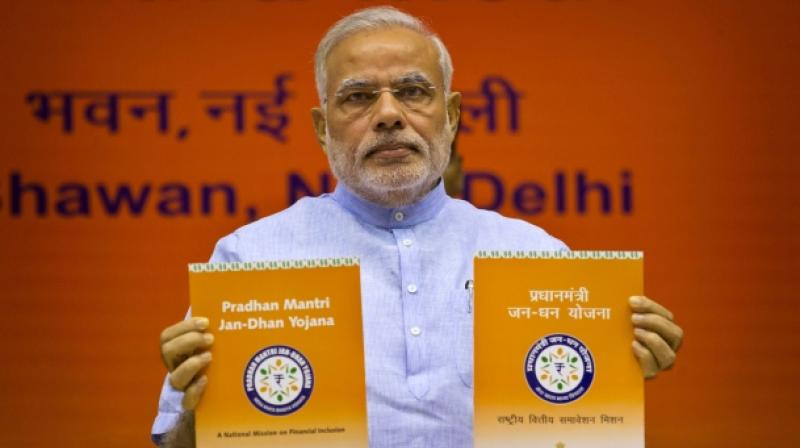 The BJP government led by PM Narendra Modi launched the Pradhan Mantri Jan Dhan Yojana amid much fanfare as soon as it assumed power. Aimed at being an all-inclusive financial scheme, it envisaged bringing all sections of the society into banking services.

Scheme started with the target of achieving 7.5 Crore Bank accounts has proved to be a remarkable Success with 39 crores 71 lakhs Bank accounts opened as of now.

PM Modi had constantly highlighted that his Government has made it possible for every Poor and Marganalized to reach the Corridors of Banks. He also asserts that the Former PM Indira Gandhi nationalised banks in the name of poor but it’s Modi Government that has made possible for each and every person of the country to open Bank Account without depositing a single penny.

What is PM Jan Dhan Yojana ?

It is a financial scheme that has targeted at the lower economic strata of the society to provide universal banking facilities. It is aimed at bringing the poor to the banking fold – a layer of the society till now untouched by the banking sector. To make the scheme more attractive, banks were made to bundle other facilities like insurance and overdraft.

The PM personally emailed the PSU banks chairmen claiming that “a bank account for each household is a national priority”. A huge target of 7.5 Crore bank accounts was drawn. Nationalised banks were pressed into bringing more members into the fold of the scheme. A record 1.5 crore accounts were opened on the inaugural day !

According to World Bank’s Findex Report, 2018 :

PMJDY Facilitated DBT and Filled the Loopholes in the system :

Jan Dhan Scheme has facilitated the Direct Benefit Transfer (DBT) to the Beneficiaries of Various Government Schemes. The PMJDY was launched by PM Modi with a long sighted vision as it has proved to be a medium to transfer the Benefits without the role of Middlemen directly into the accounts of the people. PMJDY has closed the window for middlemen and corruption in the Benefits which is intended for the poor and needy.

For instance, the money of LPG subsidy is transferred through DBT to the buyer which was not the case earlier, With the launch of PMJDY  there is a significant fall in the black marketing of LPG cylinder.

Similarly the benefit of PM Kisan Samman Nidhi which is aimed to provide an amount of Rs 6000 per year to every farmer in the Country with 3 instalments of Rs 2000 in a year is transferred through DBT directly into the Bank Account of the beneficiary.

Prime Minister Narendra Modi in his public meetings always reminds the people about the statement of Former PM Rajiv Gandhi who once said that When 1 Rs is allocated from Delhi only 15 paise reaches the poor. PM Modi asks who used to steal the remaining 85 paise and hails his Govt efforts that due to DBT when a rupee is released for the poor in Delhi whole 100 paise reaches the beneficiary.

Even during these testing times of Corona, the Jan Dhan Bank Accounts has proved to be of great help to the people. Due to the corona virus pandemic and the lockdown, the central government has transferred Rupees 500 to all the female Jan Dhan Account Holders. About 42 crore poor people has received financial assistance of Rs 53,248 crore under the Pradhan Mantri Garib Kalyan Yojana (PMGKY) through DBT , according to the Government.

Undoubtedly, the benefits of all such Government schemes wouldn’t have reached to the people at this extent to the grassroots with complete transparency. If the PMJDY wouldn’t have provided bank accounts to almost every household of the country DBT would have been impossible.