Book Beat : Unbreaking India : Decisions on Article 370 and the CAA 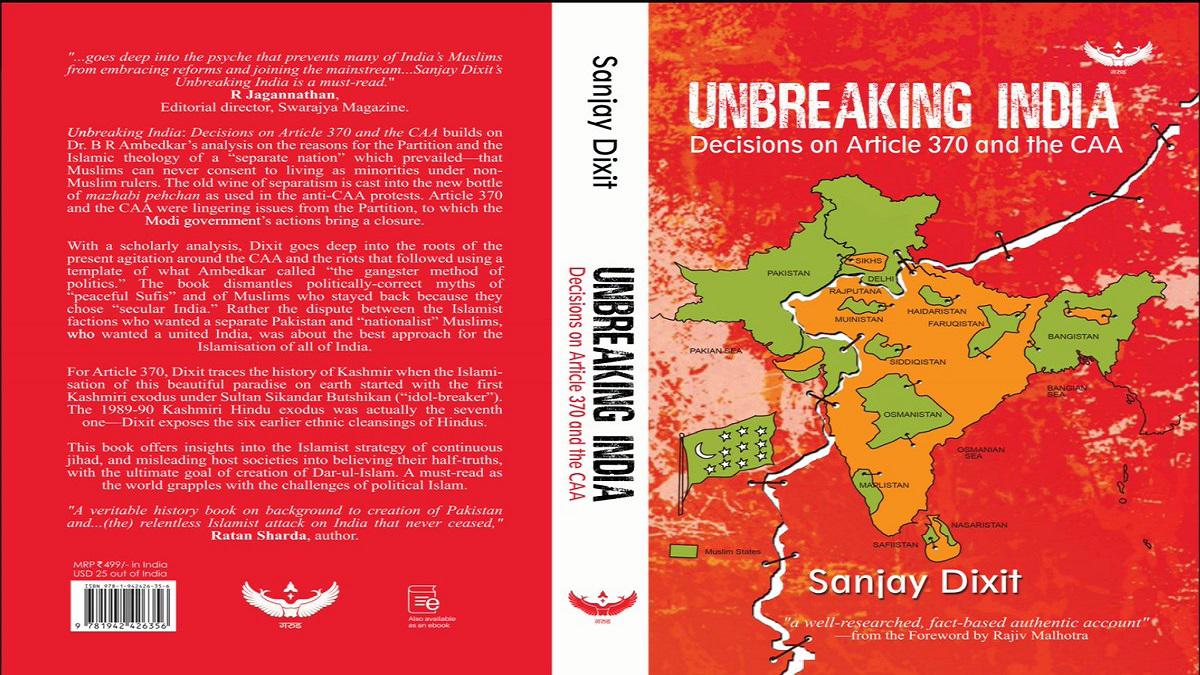 Book Beat : Unbreaking India : Decisions on Article 370 and the CAA

Article 370 quagmire was a consequence of the inability of the then national leadership to read the Muslim mind.

To start off with the gist of the book, Unbreaking India is based on the nullification of Article 370 and enactment of the Citizenship Amendment Act (CAA) which was the landmark legislative actions of the year 2019. Author Sanjay Dixit delves deep into the past and highlights the events, actions, and their repercussions that finally led to the Union of India introducing these two measures.

The book covers the contentious century of India’s tryst with Islam from the Khilafat Movement to Shaheen Bagh. In the book, he looks at the events from all perspectives – historical, social, and political. For Article 370, he traces the entire history of Kashmir from its pre-Islamic past and to the events that unfolded at the time of the Partition of India, leading to the initial inclusion of Article 370 in the Constitution of India.

Dixit also studies in detail the legal and constitutional labyrinths, discussing the various Presidential Orders and case laws from the Constitutional Bench jurisdiction of the Supreme Court. For CAA, he traces the constitutional history of India from the time of the partition of Bengal in 1905 to the unfortunate events of the Partition in 1947. His study relies heavily on Dr. B.R. Ambedkar’s analysis of the reasons for the Partition and the theology of a ‘separate nation’ that prevailed during the period.

The author has laid bare the events of a century with facts which inflicted deep scar on the psyche of Indian and made us question our own abilities. A line in the book says: The community is forbidden to use AQL, or reason, under the principle of taqlid. The history of Islam abandoning reason goes back all the way to the 10th and 11th centuries CE, when the gates to Ijtihad (independent reasoning) were closed by Muslim theologians. The resignation letter of Jogendra Nath Mandal addressed to PM of Pakistan reproduced in the book is an eye-opener. The book is very well written and takes the reader seamlessly through the entire historical events.

The phase that the nation is going through, demands her citizens to know what all factors have determined the course of the nation in the past and what would determine our future. Foreword by Rajiv Malhotra and this book describes everything one needs to know regarding “Unbreaking India.”

“The book attempts to analyse Muslim politics and national politics from this standpoint of profound understanding of Muslim theology and general behaviour. I have addressed this book to the general public with the object of spreading the light of basic education, rather than to cater the demands of higher academia and scholars “, says Sanjay Dixit. The author doesn’t mince his words to be politically correct,but keeps emotions aside while making any point. What this  book furnishes is certainly a well-researched, fact-based authentic account explicitly backed up with references that can be relied upon as the basis for serious discussions.