11 Reasons why Ujjwala Yojana could be a game changer in 2019 elections?

Pradhan Mantri Ujjwala Yojana is a social welfare scheme launched by the government with a promise to provide free LPG connection to 5 crore BPL(Below Poverty Line) households in India.

Several governments had taken up the issue of increased air pollution due to use of chulhas in the rural household. But their focus mainly lay on improvising the design of the chulhas. The idea of providing subsidised LPG cylinders to rural India is not new. The concept of transferring the subsidy amount directly to the bank accounts of the bona fide beneficiaries is also not the brainchild of this government. But sure the way it is implemented is something to look forward to. The additional features of providing free LPG connections by roping in the market dealers is what forms the basis of Pradhan Mantri Ujjwala Yojana.

The Modi government was successful in the scheme as it could convince the distributors to increase the LPG connections. As per the scheme, the government provides Rs.1600 to each beneficiary which covers the cost of the cylinder and the fitting charges. However, the cooking stove and burner are to be bought by the beneficiary with no financial assistance from the government.

Further, the cost of refilling the cylinder has to be borne by the beneficiaries at the market rate. The cost of the first refill can be paid in monthly installments to ease the sudden financial burden but that’s not the case for the subsequent refills. Also, the subsidies on gas will be deducted by the dealer as EMI until the loan is settled.

Here are 11 reasons why Ujjawala yojana could be a game changer for BJP in the upcoming 2019 elections.

The scheme has helped millions of people understand the downside of cooking using firewood or biomass. The pros of using LPG cylinders have been emphasised rather strongly through speeches and persuasions. Crores of people have benefitted through the scheme in various ways.

1. Use of LPG reduces the cooking time and thus the duration of exposure to toxic gases.

2. This also saves time that would otherwise be spent on the collection of firewood. (The Economic Survey found that on an average, women in India spend 374 hours every year in finding and collecting firewood). The very act of providing free connections would have melted the hearts of the people. The scheme brings with it a sense of inclusiveness to the BPL households. This might reflect in the results of the 2019 elections. 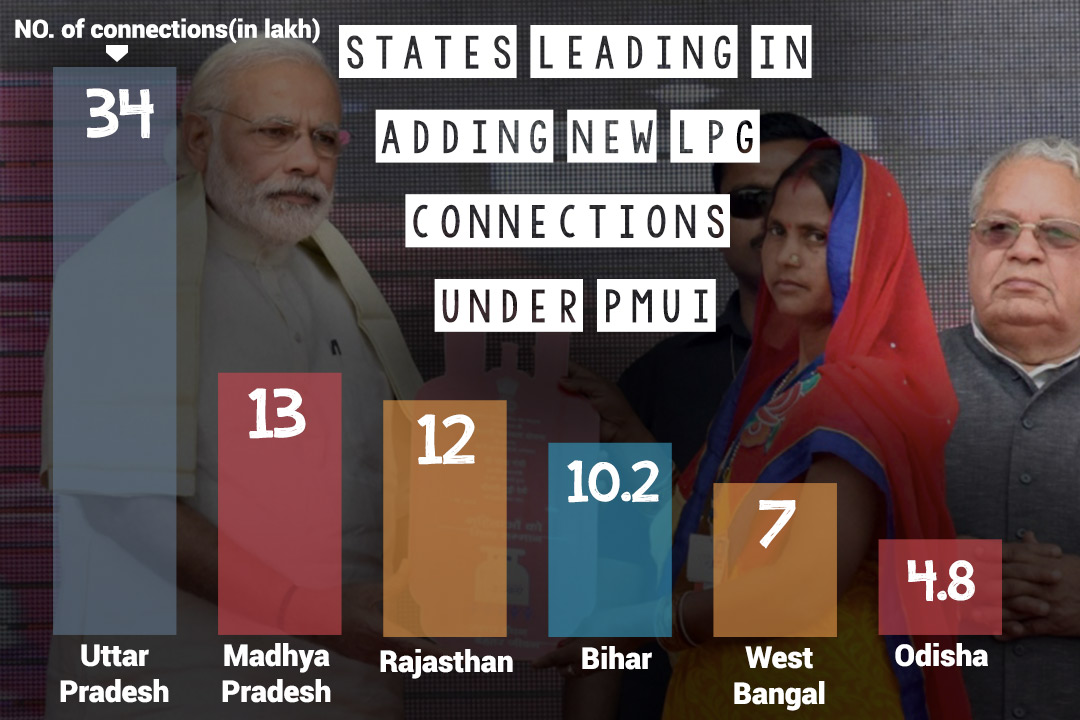 The primary beneficiaries of Ujjwala Yojana are the women of the BPL households. By naming them the beneficiaries, the government considers and accepts applications based on the documents of the women. Thus, to enroll under the scheme, crores of women have opened bank accounts and procured Aadhar cards to which they had no access earlier. Though there are loopholes in the plan, this scheme has indirectly helped in the emancipation of women. This is a noticeable reason that Ujjwala Yojana can actually influence the election next year. 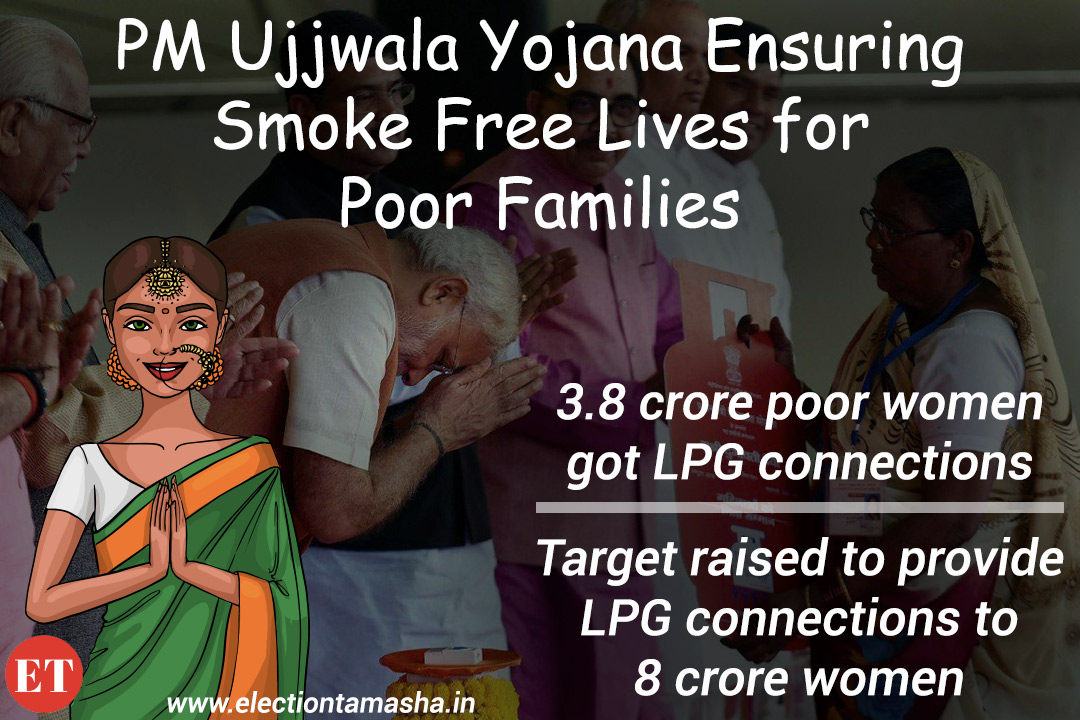 A WHO report found that the smoke inhaled by women from unclean fuel is equivalent to burning 400 cigarettes per hour. By widening the availability of LPGs, the government has reduced the risk of respiratory diseases to the women to a certain extent. The WHO has also mentioned that the Pradhan Mantri Ujjwala Yojana has been a measure “to tackle and reduce the air pollution from particulate matter”. This is another wonderful recognition for the present government that would be highlighted in its report card. 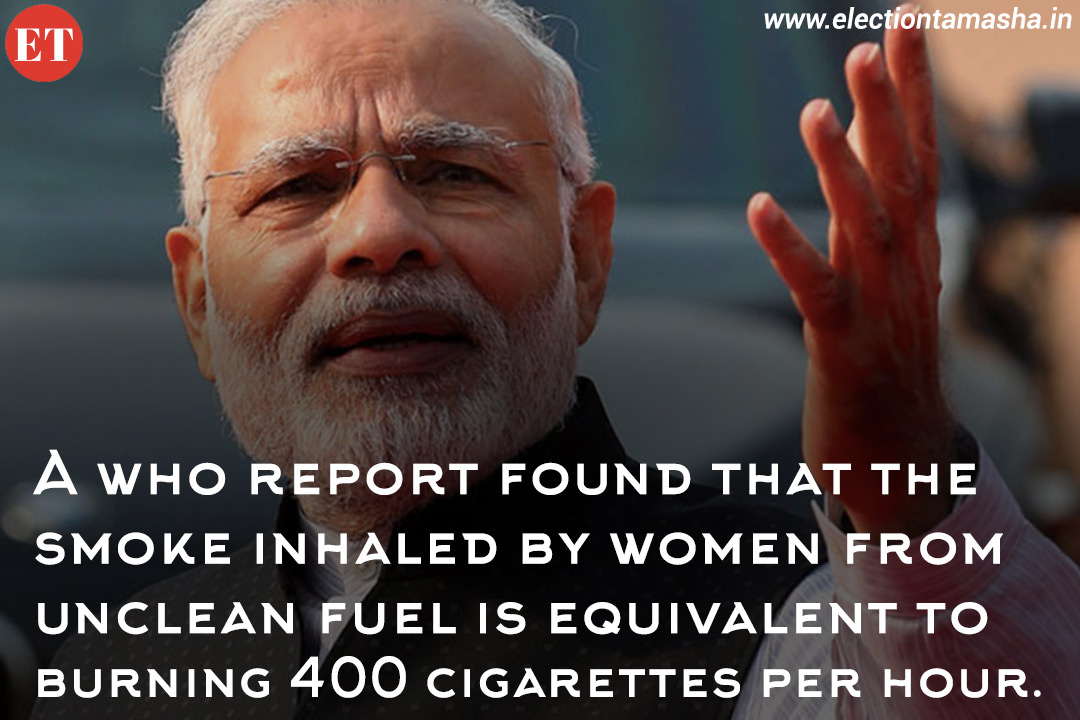 It is to be observed that the government has succeeded in reaching the target and has thus extended the eligibility criteria to SC/ST and forest-dwellers. The government could project this excellent data to attract more voters for securing a second term at the Centre.

Also Read -   Mamta Banerjee Government: How it has fared in west bengal? 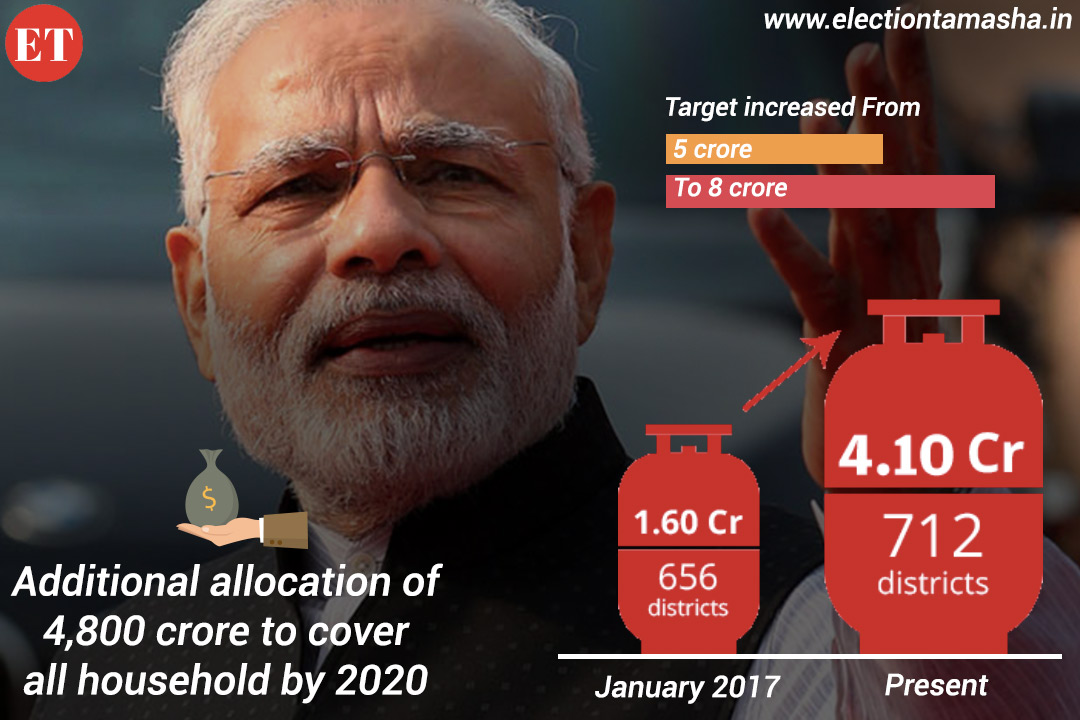 The rationale behind implementing such a scheme is appreciated by all. However, the government has overseen the ground level issue- the inevitable money problem. The BPL households are as such struggling to make their ends meet with the little money they earn. With the arrival of the gas cylinders, comes the issue of affording the refills. Many people fail to settle the loan and restrain from going up for a second refill. Thus, there are several households where the stove and cylinder lie as a happy memory. Hence, the poor implementation of the scheme could in a way bring about a negative impact on the election results. 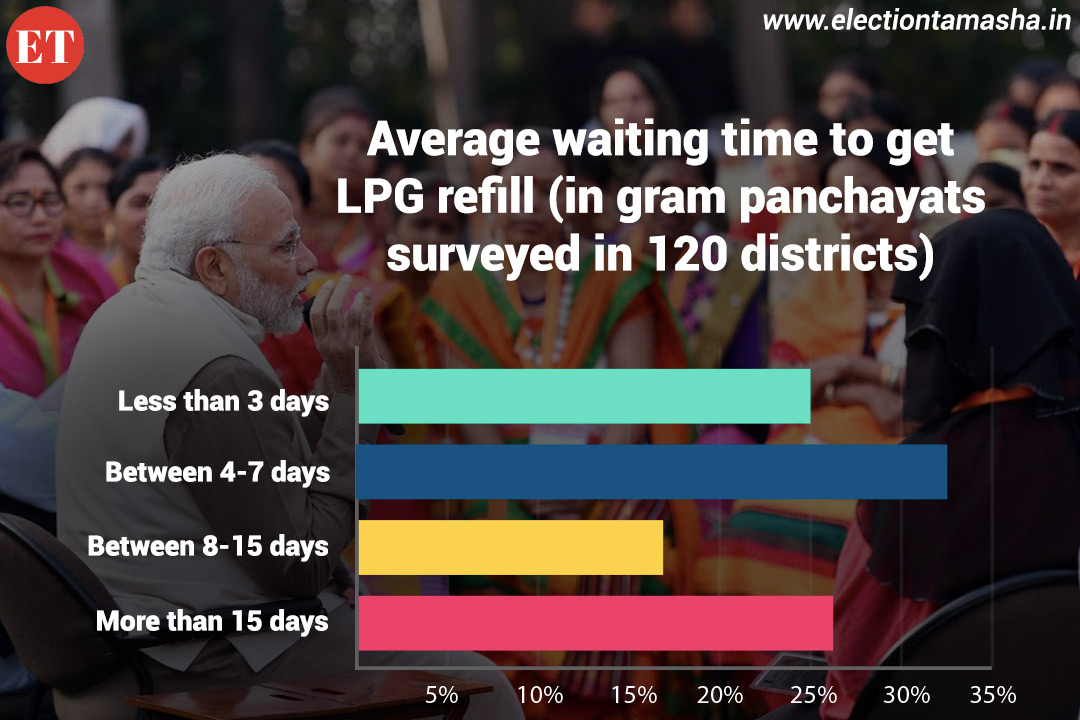 Not all Ujjwala beneficiaries get proper access to the cylinders. Distribution of the cylinders is irregular in remote locations. It takes days for the people to receive the cylinders for which they spend exorbitant amounts. This has set off waves of worry in their minds. There are people who do not avail the cylinders as they have to keep waiting for its arrival. 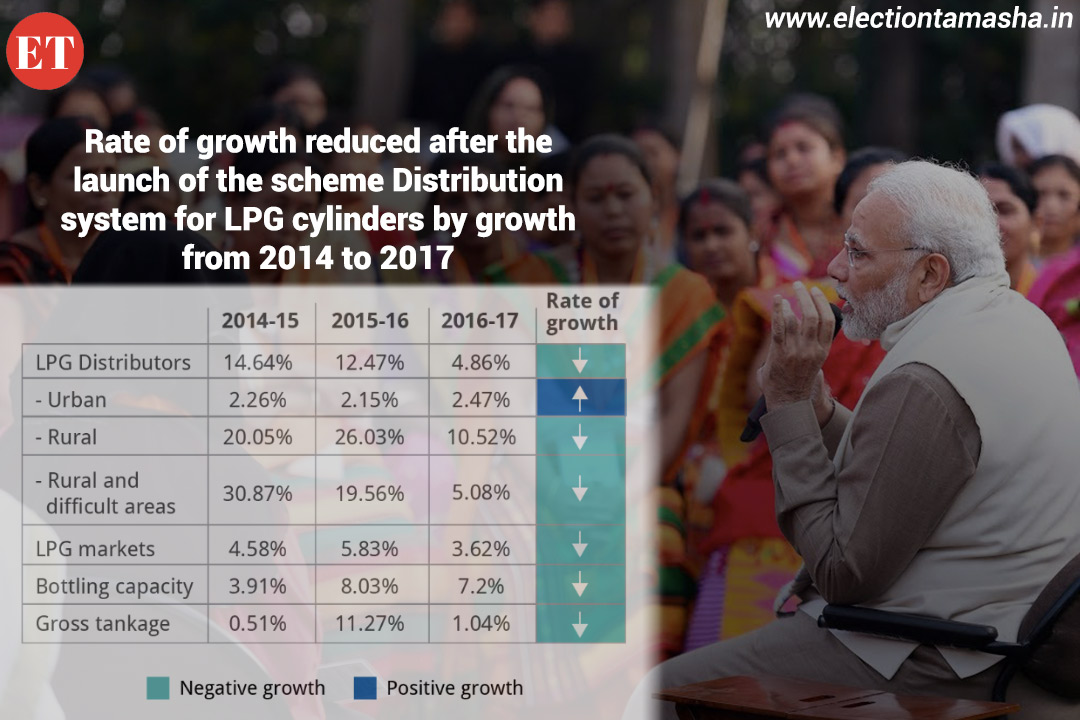 Availability is one of the major concerns of the scheme.

1. The scheme is not available to all the BPL people. Documentation and verification shortlists only certain applications.

2. The gas dealers and distributors maintain an ‘Inactive List’ to whom the supply would be cut off. This list includes people who have not refilled cylinders for a period of 3 months. Reactivation is a strenuous task for the beneficiaries. Multiple visits to the dealers and re-verification of documents are found to be difficult.

3. The reach of the scheme is restricted to a few states. It is not available to many regions in India. 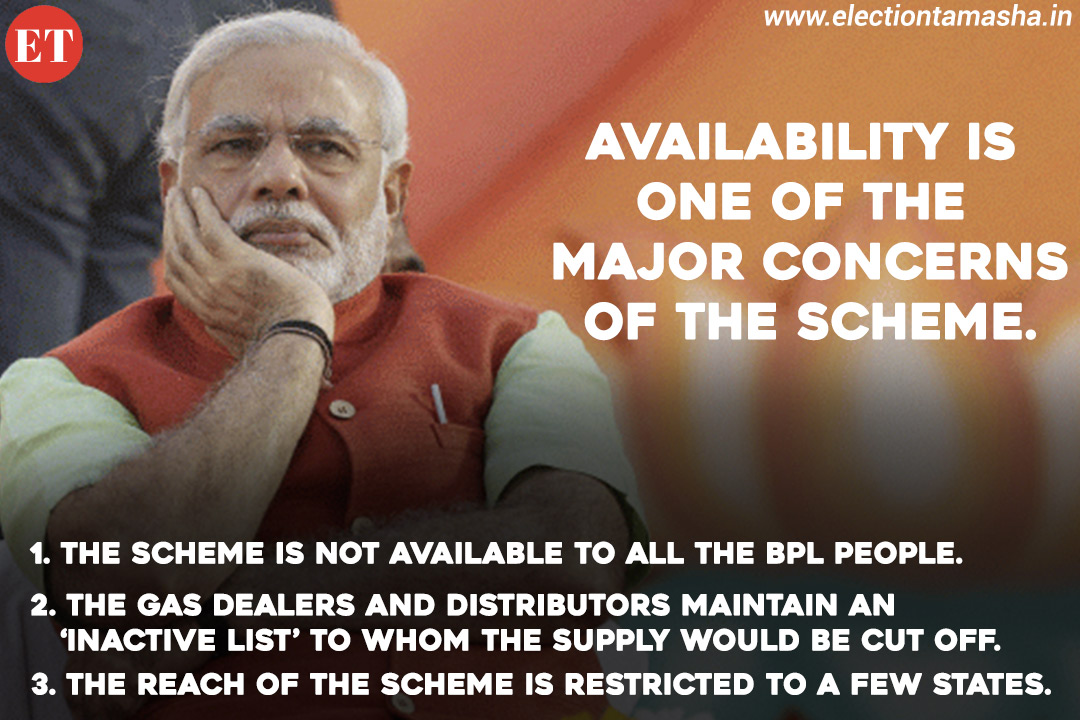 The issue with the dealers and distributors:

A report in the Financial Express states that the market leader Indian Oil Corporation released 48 lakh connections under PMUY in FY 2017-18 but 27 out of the 48 lakh (56.25%) did not turn up for a refill at the end of the year. Various dealers are wary of the scheme and are upset with the huge losses they have incurred. Their rage could be a setback to the present government in the 2019 elections. 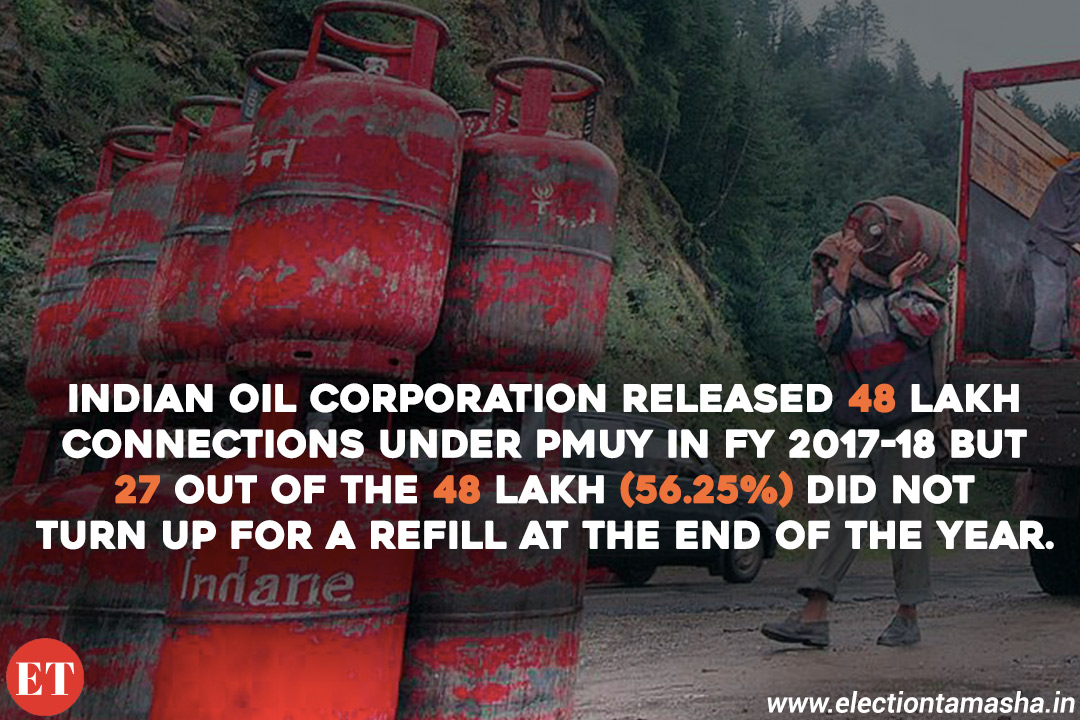 There is a huge difference in the rate of increase of LPG consumption despite very high growth in LPG connection in the FY 17. Some experts argue that this shows the failure of the scheme. Others state that this data includes the consumption of the urban middle class and upper class too. They further claim that the upper classes have started using alternative energy forms increasingly. Whatever be the reason, this controversy might spark the interest of many voters before the elections.

Connection data are available only at the state level and not at the district level, which makes it difficult to track the progress of the scheme. There are multiple concerns regarding manipulation of data. This is probable since this is not the first time there is a doubt in the data presented by the government. So, is this scheme really beneficial as it poses to be?

It is notable that the government had requested the CRISIL to release a well analyzed report on the LPG consumption in India. The CRISIL had surveyed from October- December 2015. But the government had implemented the scheme even before the report was released. The issues cited by the report are seemingly less looked at by the government.    According to the report,“85 % of the respondents who hadn’t adopted the technology cited expense as the prime reason. More than 50% of households mentioned safety as a barrier. After the high initial cost of connection (86.3%), the high recurring cost of LPG refill was the biggest reason (83.4%)”. Maybe, if the government had awaited the report, much of the drawbacks in the scheme could have been averted.

In totality, Ujjwala Yojana could certainly turn out to be a game changer in the 2019 elections because of the large attention it has drawn towards itself.