Centre for Voting Opinion & Trends in Election Research, or CVOTER, is an Indian international polling agency which covers union budgets, state elections and even international events. Since 2000 it has worked with news giants like Times Now, ANN7, United Press International, Reuters, Bloomberg News, etc. Since, elections for the legislative assemblies of Madhya Pradesh, Rajasthan and Chhattisgarh later this year and for the Lok Sabha in 2019, are around the corner, it conducted an opinion poll in collaboration with ABP News. It is the results of this survey that has created a wave debate, discussions and apprehensions about the future of the two major national parties of India. According to the latest ABP – C voter survey, BJP is going to lose Rajasthan, Chhatisgarh and Madhya Pradesh elections 2018.

So let us look at the political situation in each state in the light of this survey. Followed by why are the legislative assemblies so important that they have become mini centres of national politics.

What does Abp-CVoter survey predict?

The ABP – C voter opinion poll shows that the Congress will get a majority in all the three states, with the incumbent BJP falling much behind. However, the Narendra Modi factor will reportedly swing things in the party’s favour in the 2019 Lok Sabha election next year. Therefore, it is a question of balance between the personal conduct of the supreme leader and the work of the rest of the cadre in both BJP and Congress.

The State of the States – Rajasthan, Madhya Pradesh and Chhattisgarh

All three states are currently ruled by the BJP – Rajasthan under Vasundhara Raje, Madhya Pradesh under Shivraj Singh Chouhan, and Chhattisgarh under Raman Singh. In each of the states, BJP had emerged as the single largest party attaining the clear majority (50% + 1) in each of the assemblies, in 2013.

In Rajasthan, since 1998, the politics surrounds stiff competition between Congress’ Ashok Gehlot and BJP’ Vasundhara Raje, both occupying offices alternatively. Former Congress MP Lalchand Kataria gave a statement saying Ashok Gehlot should be made CM face to ensure victory in the elections.  Voters of Rajasthan have the habit of rejecting the incumbent. So, this year, it is the BJP’s turn for getting voted out. Since Raje has also seemingly failed to respond to the aspiration of the people of the state, Rajasthan appears to be the safest bet for the Congress. We must also not forget that Rajasthan is the only state in north India (other than Punjab) where a Congress leader enjoys high popularity ratings. In terms of the vote share, the Congress is projected to get 50.8 per cent, followed by the BJP with 36.8 per cent in the upcoming elections. This marks a complete reversal of the number of votes bagged by BJP in 2013. Also, participate in our Rajasthan Opinion Poll 2018: Who will win 2018 Rajasthan Elections?

In Madhya Pradesh Congress hasn’t tasted success in Madhya Pradesh since the dethronement of Congress’ Digvijay Singh. Since then the state had become a bastion of BJP. it was Uma Bharti that opened BJP’s account in being the ruling party in the assembly, Shivraj Chauhan however, remains the recipient of the larger piece of cake by continuously occupying the office of the Chief Minister since 2005. According to the survey, in the 230-seat Madhya Pradesh Assembly, the Congress is expected to get 117 seats, just above the majority mark, while the BJP is projected to bag 106 seats. Contrary to the survey results chief minister Shivraj Singh Chouhan has seemingly been able to regain lost ground with his popular schemes like a consume-as-much-electricity-as-you-can for a fixed amount of Rs 200 per month juxtaposed with the waiver of pending bills of around 5200 crores, Jan Aashirwad Yatra and livelihood insurance for daily-wagers have created a buzz within voters. There is no doubt about the fact that Shivraj Singh Chauhan also enjoys comparatively higher ratings. That is the reason why, BJP had bagged a whopping 165 seats, with the Congress falling far behind with 58 seats. The Congress, as the survey predicts, can indeed win Madhya Pradesh if it strikes an alliance with the BSP to consolidate the sweet sweet anti-BJP votes.

Also, participate in our Madhya Pradesh Opinion Poll 2018: Who Will Win 2018 MP Elections?

In Chhattisgarh even the survey predicts Congress win by a close margin. The Congress is projected to bag 54 seats in the upcoming elections, followed by 33 going to the BJP. Others are projected to bag 3 seats. However, the survey has neglected the presence of Ajit Jogi’s Janta Congress Chhattisgarh and Arvind Kejriwal’s Aam Aadmi Party, all set to queer the political pitch in Chhattisgarh, which has so far largely seen a direct contest between the BJP and the Congress. The two entrants have decided to field candidates in all 90 seats in what is expected to be a tight competition. In a multipolar battle, all bets are off.

State legislative elections in India are important for mainly two reasons. The first is the degree of influence state institutions have on the federal government. Each state’s legislative assembly indirectly votes for its representative in India’s upper house of parliament, the Rajya Sabha. The second reason is that the party that runs the state legislature is able to select from its ranks, the most cooperative state-level political officer. In Rajya Sabha, the BJP is the largest of the parties. This enables the Prime Minister and his Cabinet to get the assent of Parliament on the proposed policies, more easily. Presence of party members as CMs in different states helps the centre to implement policies and programmes with the least obstructions.

Another reason why elections to the legislative assemblies are important because they give an impetus to the party (with the winning streak) in Lok Sabha elections. Remember the time when BJP’s win in Rajasthan and Madhya Pradesh, in 2013 state elections boosted for Narendra Modi-led BJP, in Lok Sabha. Victory in the four states helped Modi consolidate his position and put the party in a position of strength in discussions about the election strategy with existing alliance partners and in attempts to seek new alliance partners.

If BJP comes out lucky in these states there is no doubt that it will use this victory to pressurise regional parties to join hands with it under Modi’s leadership.

Why Should Bjp be worried after Abp-Cvoter survey –

Despite the fact that Modi’s persona is still keeping BJP’s Lok Sabha dream alive, it has a lot up its sleeves to worry about now. Does the survey results mean that BJP is nothing without Modi? Or is the politics of exclusiveness backfiring? Is the presence of a few charismatic leaders enough?

Caste vote bank equations are not in BJP’s league either. Rajput voters are upset with the BJP because of the encounter killing of gangster Anand Pal (a Robin Hood figure for the community) and for allowing the screening of Padmavati in spite of protests. The BJP is now trying to appease them. But, any effort to mollycoddle the Rajputs, which as it seems to be desperate, might trigger an equal and opposite reaction among the Jats who are also a very influential vote bank in the state. Factors like anti-incumbency, the absence of a wave, subdued performance of the government, rising joblessness, rural distress, unfavourable caste arithmetic and the presence of popular Congress leaders the electorates make Rajasthan the toughest state for the BJP to win if elections are held in 2018.

Also Read -   Which party will win the Madhya Pradesh Elections 2018?

While the situation may seem under control in MP, BJP still has a lot of fallbacks to work upon, having the confidence of his allies is one of them. If the BJP wants to pursue ambitious policies like Demonetisation even in the future, then it must not lose the race to the post of CMs of the states. Even if one nation one poll is implemented, the relief would be far from permanent. 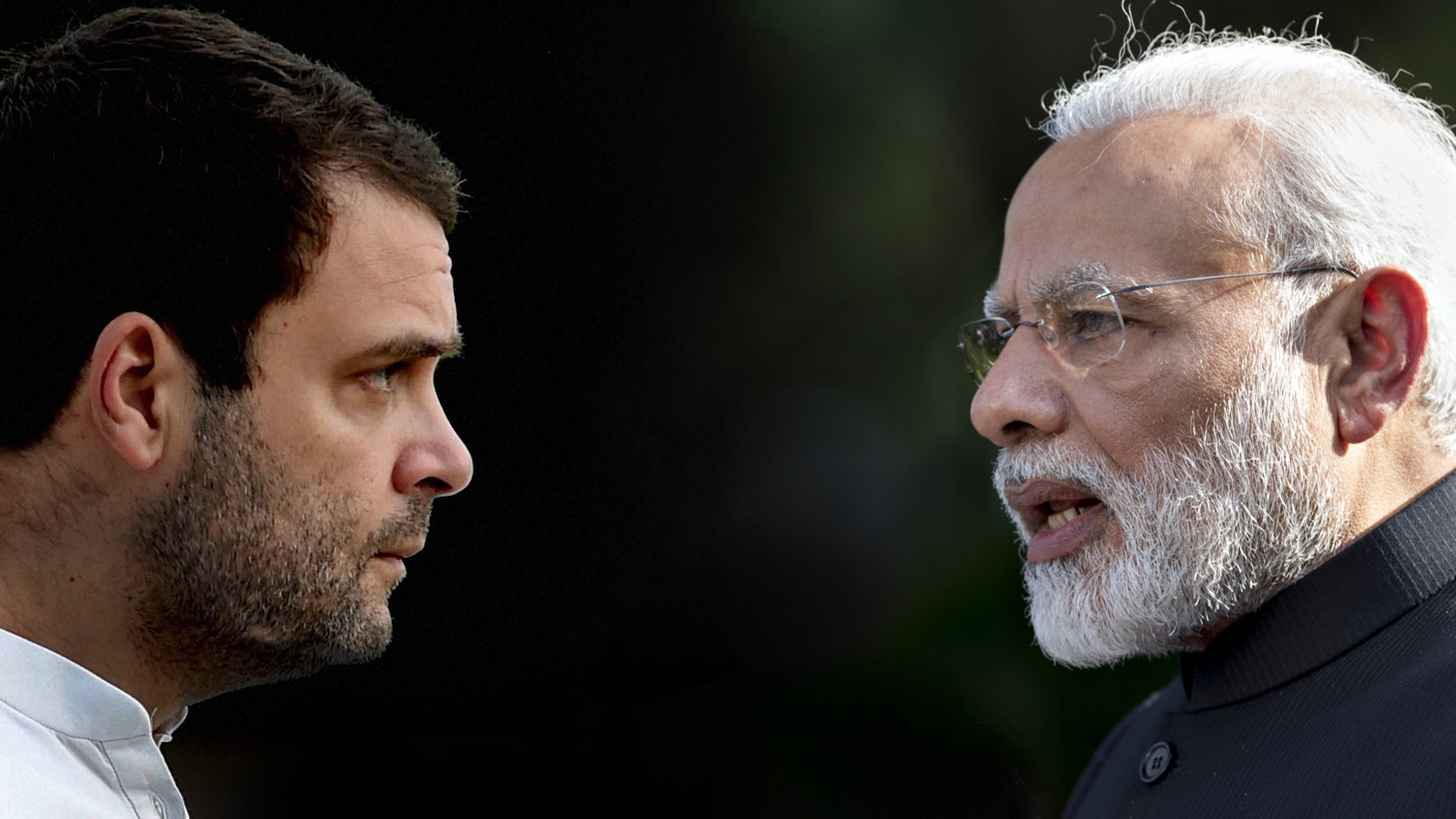 What’s In Store For Congress –

The survey, especially in the case of Rajasthan, shows that their work is bearing fruit. If they keep on working in this direction, they might as well stan victorious in the upcoming elections to the state legislative bodies.

While rosy days for Congress are more than clear in the near future. However, these can only be realised if the BJP remains unsuccessful in its endeavour to implement one nation one poll and also bring the elections to the legislative bodies of these states under its purview.

Also, when it comes to the personal conduct and influence of supreme leaders, BJP does have an edge over Congress, which only has exceptions like Gehlot. The Congress is nowhere on the ground. Its state chief Kamal Nath and campaign committee chief Jyotiraditya Scindia are more of low key players. Unlike Gehlot, their ratings, are nowhere close to their BJP rivals. Even their appeal and charisma do not match.

Keeping everything aside, the only thing the survey is able to truly highlight is the level of uncertainty. The stage is surely set for some dramatic developments during the upcoming election season.

What do you think about ABP-Cvoter survey result? Let us know in the comment section below.